Tuskegee Airmen Proved Blacks Could Be Heroes, Too 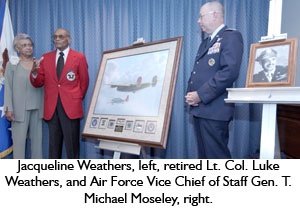 TUCSON, Ariz.—It's 30 minutes before the scheduled July 1 launch of the space shuttle Discovery, and retired Lt. Col. Luke Weathers watches intently.
Beside him lies a pristine copy of a 2003 Time magazine memorializing the crew of the space shuttle Columbia. One of the smiling faces is that of Ronald McNair, the second African American in space.
A CNN announcer says that aboard the shuttle Discovery — whose takeoff would end up getting postponed to July 4 — is the second African American woman in space.
The labels sound dated. Of course there are Black astronauts. Why wouldn't there be?
Weathers, 86, is part of the reason that fact might be taken for granted.
The framed prints on the walls of his immaculate Oro Valley home help tell the story: In 1942, Black leaders pressured the U.S. military to train a corps of Black pilots at Tuskegee Institute in Alabama. They weren't just fighting Nazis. They were fighting bigotry and segregation at home.
The Tuskegee Airmen had something to prove: Black Americans wanted and could handle the most challenging military jobs.
For their achievements, they will receive the Congressional Gold Medal in a White House ceremony later this year.
Weathers was motivated by more than patriotism when he joined the Army Air Corps. "They were getting ready to draft me," he said. "I didn't want to be cannon fodder."
The Memphis native, who had completed coursework for a degree in science and biology, used what influence he could to receive a spot as a cadet. He became one of 450 pilots sent overseas and one of almost 1,000 who graduated.
"This was called the Tuskegee Experiment. We're going to prove to you that you can't do it so you'll stop hollering," Weathers later told a newspaper. "The thing was that Whites didn't think Blacks could fly. It's just that simple."
Over two years in Europe and northern Africa, they damaged or destroyed more than 400 enemy aircraft. The fighter pilots never lost a bomber that they were escorting.
Some got their first experience with integration in German POW camps.
Bigotry didn't bother Weathers.
"I felt sorry for the racists," he said. "I knew who I was."
He does not tell war stories but clearly relishes the memory of a triumphant return to Memphis and prominent coverage of a parade in his honor — the first time, he said, the local paper had ever featured a Black person.
One print on the wall shows pilots preparing to take off from their base in Italy. Weathers points out the plane he piloted. It is called "Lucifer" in the painting, but Weathers said he had no name painted on his plane.
"I was a marked target from the standpoint of German intelligence," he said. The Black community in Memphis had mounted a major war bond effort, and he feared he specifically would be targeted "to take some of the wind out of their sails."
In a painting hanging at the Pentagon, Weathers, in a P-51 Mustang, escorts a damaged B-24 bomber to safety in England.
On Nov. 16, 1944, Weathers and two other pilots escorting the bomber were attacked by eight German planes. Weathers reportedly flew into the Germans head-on, taking down one plane with machine-gun fire. Then he dived, pulled out of the dive and found one German pilot still behind him.
"I chopped my throttle and dropped my flaps to cut my speed quickly. The fellow overshot me, and this left me on his tail." He machine-gunned the Messerschmitt down.
According to another account, he passed up a third "kill" that day to stick with his primary mission: protecting the bomber.
He deflects questions about his postwar military career, preferring to focus on the unit. "I did a lot of stuff in intelligence," he said.
The Tuskegee Airmen — also referred to as the schwartze Vogelmenschen ("Black birdmen") and the Red-Tail Angels — have become the stuff of myth and made-for-TV movies. Laurence Fishburne played the lead in a 1995 HBO film.
Image mattered to the Black men and women fighting for civil rights at home. The first Black fighter pilots, grinning for the cameras, were charismatic, but not too cocky.
For the flesh-and-blood men, the saga is winding down. "There's only a few of us left," Weathers said.
He will be on hand to receive the medal.
"If the president calls you, know you've got to go," he said.
— The Associated Press