Q&a: NBA's James Donaldson Talks About 'Standing Above the Crowd'

Brian Stimson of The Skanner News
Published: 12 May 2011 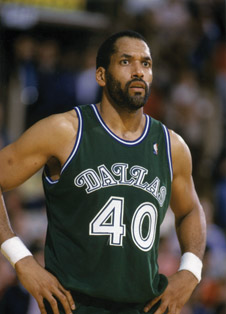 In his new book, "Standing Above the Crowd," Donaldson opens up about not backing down from a challenge, the importance of mentors and the keys to keep yourself focused during a time when many people are switching careers.

With three different distinct career changes under his belt – professional basketball player, small business owner and candidate for Seattle mayor's office – Donaldson says he knows what it's like keeping on task.

Here, the all-star talks to The Skanner News about his awkward and uncertain youth, career transitions and how he fed into an interesting piece of trivia from his days as a pro baller.

The Skanner News: What is your secret to success?

James Donaldson: I credit a lot the success I've had over the years with mentors who have helped me make good decisions and given me a lot of insight and expertise along the way.

TSN: Does that extend to your career in basketball, as well as your business and professional career?

JD: Yes, exactly, it started in basketball of course and helped to get that career underway, but along the way, I was able to meet new mentors and professional mentors that helped keep me going and on the right track.

TSN: Can you share some of the secrets to success from your book?

JD: One of the biggest lessons I learned was from an assistant coach who taught me never to be satisfied. I think nowadays a lot of us get satisfied and complacent, we quit pushing ourselves to excellence. I learned that at an early age, well before I became a professional athlete, that reaching a certain level isn't good enough if I really want to reach the top of my profession. My lesson of never being satisfied, which is a chapter in the book, is one that I carry to this day.

TSN: Do you mentor a lot of young people yourself?

JD: I do. I do. Both officially and unofficially, there's not a day that goes by where I don't bump into a young person who wants to ask me questions or understand what I'm doing and what I've had to do to accomplish what I've accomplished through my years. And I'm always willing to offer a helping hand, or some suggestions or some advice or words of encouragement. I think I do a lto of mentoring in that regard, even more than officially mentoring someone.

TSN: What is it that motivated you to write this book?

JD: As I've gone through two or three careers in my working life, as far as being a professional athlete and a small-business entrepreneur, and political candidate in the city of Seattle and very involved as a member of my community, I just got to a point in my life, here I am in my early '50s where I have been looking back to whence I've come and understanding what it took to stay on track in the first place. And I just wanted to offer that advice to young people who are going to be following in my footsteps just as I followed in a lot of other people's footsteps along the way. I look out there on societal landscape as a whole and I see a lot of our younger generation really struggling, trying to focus in on what they're going to do, what they're going to be and how they're going to accomplish that. There's so many more distractions nowadays and temptations and pitfalls than there were when I was a youngster, so I really want ot help younger folks navigate on that path to becoming successful.

TSN: When you were a young man, was your future career pretty well mapped out on the way to a

JD: Not at all, I actually didn't play basketball until my last year of high school. Simply because I was a youngster like other youngster, where I was full of insecutiries, lack of confidence, very uncoordinated with my height and size and weight. Didn't have a high self esteem with myself. Most youngsters go through that phase at some point. It wasn't until I met the great mentor, my high school basketball coach, Chuck Calhoun was his name down in Sacramento, Calif. Where Coach Calhoun came up beside me and encouraged me to take baby steps, to start fulfilling that potential a long time before I could see that potential. So that's where I came from. It also helps to come from a solid family background that really emphasized academics for the first part. I knew I was going to be a good student and stay in school and at least graduate from high school, that was my pathway, but athletics came into the picture pretty late.

TSN: What separates this book from a lot of the other self-help books out there?

JD: Well I think that due to the fact that I have gone through two to three distint, different career transitions, a lot of people are struggling … how to remake themselves, how to keep a clear focus and how to keep a clear game plan and strategy when all of a sudden the rug gets pulled out from beneath them. So my book is really one of encouragement, not just the commonsense approach, but one that encourages you to take a deep introspective look at yourself, continue to have faith and trust in yourself, a higher power and those that you keep around you.

TSN: Was it difficult for when you went from basketball to having your own physical therapy clinic?

JD: Not really, I started the physical therapy clinic 21 years ago right in the middle of my 20-year basketball career. I had a devastating knee injury 10 years into my career, I was in my early 30s and the prognosis and outlook was very bleak on whether I'd ever return to playing again. So at that point I had what I call a lightbulb moment to go to therapy for five months. I asked myself, if I cannot play again, what am I going to do? I was a college grad so I was ok with that, and I had other skills, but there was nothing that I was as passionate about as basketball and that's when physical therapy came to the forefront. I said, I know what I want to do now, create an environment where people can come and get well again, be surrounded by great physical therapists, my massage therapist, my nutritionalist, my athletic trainers … that's when my epiphany hit hard and I went ahead and opened my first clinic. I did eventually make it back to play another 10 years to play professional basketball, but my clinic was off and running and maturing by the time I retired. During those early years, I was basically a hands off manager and owner, and after basketball I had something to transfer into.

TSN: Do most younger professional sports players do a good job of looking beyond their athletic careers  and planning for the future?

JD: No, most players do not do a good job of planning past their athletic careers. You see a story in the NY Times today about Tiki Barber, a great running back for the Ny Giants, where at 36 years of age, after being retired for four years, all of a sudden he's coming back to try out for professional football again, because he never found that passion again, something that gets him out of bed, that has him putting the same amount of effort and emphasis to it as the sport that he loved. A lot of athletes are challenged with that. Most of us retire early. A couple of reasons I was motivated to join the Legends of Basketball, otherwise known as the NBA Retired Players Association as a board member because less than 20 percent of us have a college degree. And also, 85 percent of us will be going through a divorce upon retirement, for a career that lasts 3 years on average. Those are a lot of dynamics that are not in your favor. What we try to do on a board level, we try to create programs that will be helpful to the guys on their transition, even before they retire.

TSN: Did that experience help you craft the book?

JD: It did. It really did. Part of my fraternity, is hundreds of hundreds of retired players who are trying to find themselves. I was lucky that out of an adverse situation such as the devastating knee injury, to find what I wanted to do next that wasn't about playing.

TSN: Now a couple of basketball questions. I've read that you never even attempted a three-pointer in your entire NBA career. Why?

JD: Well, you gotta remember, I played back in the 80s and 90s. The three-point game wasn't as totally utilized by every player on the court back then. You had guys on the team whose specific job was to shoot three-pointers. So, I played my whole career – and I'm the answer to a trivia question if you ever hear this – who played the most amount of games, the most amount of seasons without ever, ever attempting a three-point shot and that's me. As the years wore on and I became aware of this trivia, I just said, it's not my role, not my strength to hoist up three-pointers. I'd see guys like Manut Bol throw them up there from all over the place and Ralph Samson from time to time and other 7-footers. But it was not my game and I had no inclination to give it a try.

TSN: During your entire career, were there ever any players or teams that you absolutely dreaded getting on the court with either because they were so good or so dirty?

JD: Yeah, I do write about that in the book. Of course the bad boys up in the Detroit who were filthy and nasty … Rick Mahorn and Bill Lambier, I'm not sure which was which, it didn't matter. They'd put you in those double team sandwiches and knock the living daylights out of you from time to time. So tough teams like the Pistons, but also hall of fame caliber teams like the LA Showtime Lakers, with Magic, and kareem and Cooper and Worthy and Scott, Pat Riley running the show. Hall of famers all the way around. I thought I played my best when I went up against the best. I learned early in my career that I couldn't shy away from competition and from feeling a little bit intimidated by those little things. That's another thing I try to convey to the young people out there. Step up to the challenge. Make it happen.

TSN: And finally, who are you rooting for in the NBA Finals?

JD: Well it looks like the Miami Heat is the one who has their act together, playing better and better as the playoffs go on. Originally I had Miami and the Lakers picked to match up in the finals, but I think I'm going to go for Miami and my beloved Dallas Mavericks in the finals.

Visit www.StandingAboveTheCrowd.com for more information. If you order the book from his website, Donaldson will personally autograph the book.