Lisa Loving of The Skanner News
Published: 05 May 2011 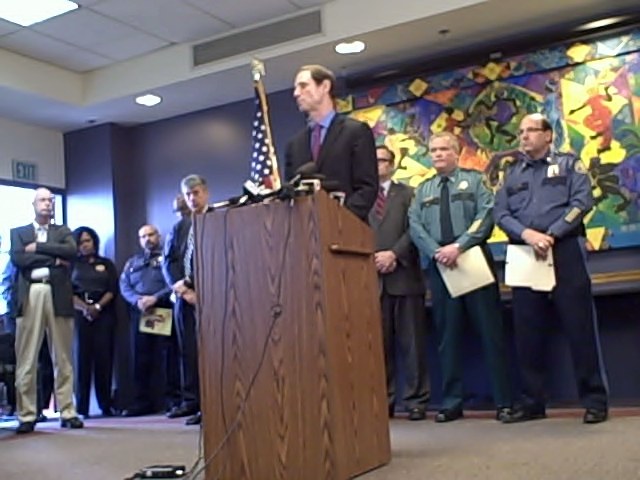 Sen. Ron Wyden last week called for increasing use of the RICO law to stop gang activity in the Portland metro area.
Law enforcement and elected officials say drastic federal budget cuts could shut down gang resistance and outreach programs and that increased use of RICO laws against gang members are in order.
Meanwhile, Portland City Commissioners last week voted unanimously to rejoin the Joint Terrorism Task Force.
There is a sense in the community that these two developments are linked and that young Black males – including Muslim converts and anyone with any ties to gang activity – are set to be even more surveilled, spied on and entrapped by the FBI and Portland Police in the near future.
Community activist and Fire Frashour Campaign member Rahsaan Muhammad says there is a growing convergence between law enforcement's potential use of the Racketeer Influenced and Corrupt Organizations Act (RICO), the JTTF and the demographics of our local community. 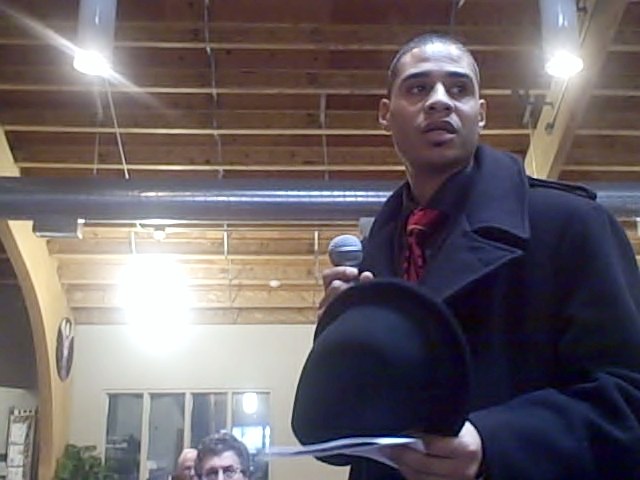 Fire Frashour Campaign member Rahsaan Muhammad testified last year at a Gang Task Force Symposium held in Northeast Portland.
"If you check, statistically, religious conversions or acceptance in America, the number one religion that young Black males are leaving is Christianity, and the number one religion that they are joining is Islam," Muhammad said. "So one of the greatest fears is that young Black males join Islam in all its different forms, creating a growing number of young men who will not be willing to go along with America's wars against Islamic countries."
It may sound like a conspiracy theory to some, but there's no question that virtually every Oregon resident charged and convicted of terror-related crimes so far – and there are a surprising number -- has been either Black, or Muslim, or both. And certainly most of the 727 people currently listed on the Portland Police gang list are people of color.

Police Broke Oregon Law By Targeting Activists Not Criminals
RICO laws, as well as the Patriot Act, both involve significant degrees of surveillance, and wide swaths of secrecy in government operations.
"There was a big wave when a lot of that RICO stuff first came out in the mid to late '90s, where the police did a whole sweep in Old Town-Chinatown with a bunch of young Black men, one of which was my cousin," Muhammad said. "They were all secretly indicted for drug charges and then given some stiff sentences with regards to that."
Muhammad's comments reflect conversations going on in coffee shops and clubs all over the metro area: young African and African American people increasingly see themselves as being the scapegoats not just of local 'get tough on crime' efforts, but also federal terrorism units.
Members of the older generation – while not always willing to talk on the record – say the trend harks back to previous decades, when local officials collected intelligence on the Black Panthers and other community organizing groups.
As the Portland Tribune reported in 2002, retired Portland Police terrorism expert Winfield Falk was found to have stolen and stashed 851 surveillance files dated from 1965 through the early 1980s that had been destined for shredding after it was confirmed that the city's information gathering was illegal.
The files were compiled on members of the Black Panthers, Peoples Food Co-Op, and local elected officials, among many others.
Former Tribune reporter Ben Jacklet wrote, in the series of articles titled 'The Secret Watchers,' that law enforcement says that doesn't happen anymore.
"But the spy files provide a cautionary tale in today's post-Sept. 11 world. They show how intelligence gatherers can be seduced by their own political convictions. They show how watching one group leads to watching another, and then another. And they show how easy it is for secret files to take on a life of their own."
The article continued:
"'People think surveillance will only be used against the bad people, but it never works like that,' says Ron Herndon, a longtime activist in Portland's Black community who was spied on for years. 'When you give law enforcement the unfettered authority to snoop into people's lives in the name of national security, it will be abused.'"
Read the article here
Muhammad notes that former Portland Police Officer Ron Frashour, who pulled the trigger that killed Aaron Campbell, is up for a new hearing next month in which he may be awarded his job back – one of many small factors that community members say shows police officers are not held accountable for wrongdoing.

Preventing Violent Crime Requires Programs for Kids
Sen. Ron Wyden last week said it is important for local citizens to get behind gang prevention programs that stand to be cut in the federal budget.
"The last stop that we made last night in the community, I believe it was at the market at the corner of 18th and Dekum, and a fellow came up and he was wearing colors, and there wasn't much question in my mind that he was a gang member," Wyden said. "And he said, Senator, if you're serious about getting at this you've got to reach the kids. You've got to reach the kids that are four, five, six, seven.
"He basically said because by the time they're 10, you're playing catch-up ball," Wyden continued. "So in this community we're going to have to marshall all our resources, federal, state, and local, to deal with this."
One that's on the chopping block is the Gang Resistance Education and Training Program, a model community policing institution that sends police officers into schools to work with young people and build positive relationships one-on-one.
GREAT also sponsors family events and parenting classes between law enforcement and immigrant Hispanic and Somali families in the Cully neighborhood.
The program's national funding is being slashed from $25 million a few years ago to $10 million in next year's federal budget.
Meanwhile, alleged Christmas bomber Mohamed Mohamud, who was born in Somalia, is scheduled for a 'status and scheduling hearing' May 23, after Judge Garr King in January rejected prosecutors' efforts to schedule the teen's terrorism trial for February of 2012.
Mohamud's attorneys are expected to argue the former Oregon State University student was entrapped by FBI agents. He has pled not guilty in the case.
The City of Portland's vote on the JTTF came after almost a decade of non-participation on the grounds that Oregon law forbids intelligence gathering on individuals not suspected of a crime.
The vote last week came after dozens of rewrites of the proposed guidelines for participation.
"The strong link – they had to have that young brother supposedly plotting to blow up the Christmas tree, and that was really at the heart of the talk that really in my opinion swayed some in the city of Portland to go this route," Muhammad said.
The New York Times poked gentle fun of the final agreement as being "very Portland" for adding "inclusivity" language and being so filled with euphemisms that attorney Brandon Mayfield couldn't understand it.
Mayfield is a Muslim lawyer who briefly represented the Portland Seven during their terrorism trial. His life was interrupted in 2004 when a lone FBI agent in Portland wrongfully determined his fingerprints were found at the scene of a bombing in Madrid.
After an odyssey of surveillance of his family, intimidation, jail, and then a long legal process, Mayfield was exonerated and won a $2 million settlement from the federal government.