A Brief History of African Americans in Portland 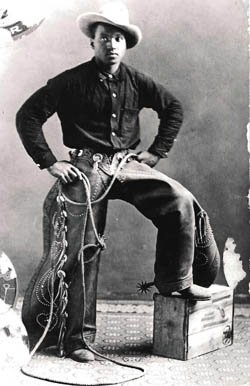 The first known African American to set foot in Oregon did not fare well. Marcus Lopez, a "cabin boy" on Capt. Robert Gray's ship Lady Washington, was killed by Indians with other shipmates near Tillamook in 1788. Later, York, Capt. William Clark's slave, who accompanied the 1804-'06 Lewis & Clark Expedition, became a legend among the Native Americans who encountered and admired him.
Black pioneers were among the first non-Native people to settle the West. More than 40 African American pioneers are buried in Salem's Pioneer Cemetery.  But while a few found a welcome and freedom in Oregon, many other black pioneers did not.
Oregon did not permit slavery, yet its 1857 constitution spelled out that the state was reserved for Whites-only. Harsh exclusion laws prevented African Americans from living in the state, voting or owning property. Interracial marriages were forbidden. No wonder the 1900 census counted just 775 black residents of Portland and only around 1200 in the entire state.

With the arrival of the transcontinental railroad, an African American community began to form around Union Station. Black entrepreneur W.D. Allen opened the Golden West Hotel in 1906, offering "all the conveniences of home" to Black railway porters, cooks, barbers and waiters.
Visitors to Portland, including entertainers, Illinois Congressman Oscar DePriest, and labor activist A. Philip Randolph, who were denied service in Portland's white-owned hotels, stayed at the Golden West.  Still standing at 707 NW Everett St., the hotel was a center of African American social life until it closed in 1931. A display that tells the story was installed on its walls in 2009                            .

From 1890, African Americans migrated to Portland to work in the luxurious 326-bedroom Portland Hotel. Along with railroad work, service jobs were the best available to African Americans. A wrought iron gate and fence from the Portland Hotel are preserved at the site, the Eastern side of Pioneer Square.
The new resident's established churches ran laundries and opened stores. Black-owned businesses lined Northwest Broadway. Some bought homes on the other side of the Willamette, north of the railroad tracks. Between WWI and WWII the Ku Klux Klan was a powerful force in Oregon. Stores, theaters and hotels carried signs with messages like:  'No Blacks, Filipinos or Jews."
A few African Americans, such as Dr. Norval Unthank and McCants Stewart entered the professions. An NAACP formed in 1914. Beatrice Cannady, its secretary, was editor of The Advocate. The exclusion laws were repealed in 1926. Yet as the OPB documentary 'Local Color' documents, it wasn't until the civil rights push of the 1950s that African Americans, no matter what their educational qualifications, were accepted into the professions.

Most of the African Americans who stayed in the city moved to Albina, which stretched north from the area where the Memorial Coliseum and the Convention Center stand today. North Vancouver Avenue and North Williams were the hub of the black community and where you could find barbers shops, stores, women's clubs, after-hours jazz and churches.
In 1940, Portland's African American population stood at just 1,800. Then during WWII, 25,000 African Americans came West to work in the Kaiser shipyards. North Williams Street in the Albina district, was home to 24-hour live jazz and "shake-dancers"  at clubs such as The Dude Ranch, Paul's Paradise, Li'l Sandy's and the Savoy.

To house this workforce a new city was built on the Columbia River flood plain. Vanport housed 42,000 people, 40 percent of them black, in segregated neighborhoods, but with integrated schools. In 1948, Vanport was flooded when the Columbia River burst its banks. Residents fled, many on foot carrying their possessions. Today you can picnic at Delta Park, where Vanport once stood.

Improvements in the 1940's yet Progress Hampered

Late in the 1940s, the schools had begun to hire Black teachers – at least for elementary schools – and a new coalition of civil rights activists emerged in the NAACP and the Urban League. Laws legislating equal rights in employment and accommodations opened doors.  Yet African Americans who wanted to buy homes outside of Albina faced barriers from redlining banks and homeowner's associations. And pervasive employment discrimination hampered progress.

After WWII, development, first of the Memorial Coliseum then Interstate 5 and Emanuel Hospital razed large tracts of Albina. The Eliot neighborhood alone lost 3,000 residents. African Americans lost homes and neighborhoods moved north.
The struggle for equality grew radical in the 1960s and 1970s. Portland's Black Panther chapter ran a food pantry and pushed against the continuing racism. In 1982, Ron Herndon stood on the table at a school board meeting to highlight glaring inequalities in education. And The Skanner News led the fight to change the name of Union Avenue, the second most-travelled street in the city, to Martin Luther King Jr. Boulevard. It took five years to achieve. But today, MLK runs through the heart of the historic Northeast Portland African American Community. Banners on the 7-mile long street testify to more than a century of African American contributions to the city.

Come visit us in Northeast Portland and meet our people.