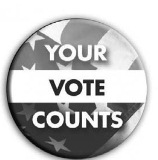 Yes it's election time again. And this time it's all about schools – well mostly. Portland School District has put forward two measures: a bond seeking money to repair school facilities and playing fields; and a levy to support educational programs. Parkrose School district is also asking voters to approve a bond measure for school facilities. And there are school board elections in eight districts: Centennial, Corbett, David Douglas, Gresham Barlow, Lake Oswego, Parkrose, Portland and Reynolds.

Mt. Hood Community College, Multnomah Education Service District, and Portland Community College have directors' elections. Throw in a contest for Gresham City Council and the Scappoose Fire District bond and there's plenty to play for.
Ballots are being mailed out now for the May 17 Special Election. Each registered voter will receive a ballot. All ballots should be delivered by Thursday, May 5.
Voters who do not receive a ballot by May 5 should call the Elections office at 503-988-3720.
Voters can mail their voted ballot back with one first class stamp or drop off their ballot at any Official Drop Site in Oregon. Voted ballots must be received by 8 p.m., May 17.

Measure 26-121 Portland School District Bond
A yes vote would issue $548 million in bonds that would add $2 per assessed $1,000 in property taxes for six years, then would be reduced. The funds are needed, the district says, to rebuild nine schools and repair 86 schools to bring building and equipment up to standard. Needed repairs would improve fire and safety, electrical, plumbing, lighting, roofing and heating systems. Earthquake safety, handicapped facilities, science equipment and teaching technology would be replaced or refurbished. School grounds and fields would be restored. Schools to be rebuilt are: Roosevelt, Faubion, Rigler, Laurelhurst, Cleveland, Marysville, Markham, East Sylvan and the Middle College Program with Portland Community College at Jefferson High.
The bond is supported by Portland PTA, Portland Firefighters, Portland Police Association, the League of Women Voters and many others.
Opposing the measure are: the Taxpayers Association of Oregon, Multnomah County Republican Party Chair Jeffrey Reynolds, and Roxanne Ross of Americans For Prosperity.
Opponents argue that this is a bad time for a new tax, that it may cost more than projected and that "remodeling schools" should not be a top priority.

Measure 26-122 Portland School District Levy
The levy would add $1.99 per $1000 of assessed property value. "The typical home currently pays $15.36 per month, which would be replaced by a payment of $24.45 a month for five years"
The money would fund 600 teachers- some in every school, including 200 that would be lost next year because of budget cuts. It would prevent "substantial increases in class size so students receive more individual attention from teachers." No money would be spent on administration.
The measure has the support of teachers, the PTA and the Police Association. No arguments against are listed in the Voters Pamphlet.

Director, Position 6, At Large: Diane c. Noriega, a former Dean at Sacramento's College of Education and VP of Gresham Rotary Club is opposed by James Zordich, a former Curator of Technological History at Los Angeles County Museum of Natural History.

Director, Position 7, At Large: Jenny Simonis is a web designer, journalist and former neighborhood association president. Standing against her is Ralph A. Yates, a doctor and current director at Mt. Hood Community College.

Director, Zone 3: Paul Capell a Pacificorp engineer and former Prineville mayor is in a three-way race with Erick Flores, an educator with the David Douglas High School and self-identified Progressive; and Maggie Nelson, a retired teacher with experience as a precinct committee person.

Director Zone 5: Robert W. Coen is the only candidate in this race. President of BCI Group Inc., an insurance company, he serves on the board of several nonprofits including, Oregon Children's Development Commission.

Director Zone 2: This race features four candidates. Michael Durrow (left) is a licensed realtor, software engineer and precinct committee person with roots in Northeast going back to Vanport. Kitty C. Harmon (below right) is a program counselor at the University of Portland's School of Engineering. Last year UP cited her for her work. William (Al) Petersen (below center) is an architect who has served on St Helens Planning Commission and other planning projects in St Helens. Harold C. Williams (below left) is CEO and Board chair of CH2A Associates, a personnel management and labor relations consulting firm. A former member of the African American Community College Trustee Committee, he is the current Zone 2 Director.

Director, Position 6, At large: Mike Delman, a policy consultant and former chief of staff to Commissioner Gary Hansen, has served on the Archimedes Movement citizen Leadership Council, dedicated to health care reform, and is endorsed by Jeff Cogen.  Doug Montgomery is former management analyst at Bonneville Power Administration, and a part-time college instructor. He has served on the state licensed nursing home administrators' board, the Independent Police Review Board and citizen budget committees for health and  human services.

Centennial School district
Director, Position 3, At Large: Brenda Clark, is a production foreperson at Bimbo Bakeries. A Centennial High graduate with a Baking Science and Technology Diploma forom the American Institute of Baking, she has served on Centennial School Board and Little League. Don't confuse her with Dorothy Clark, a dental hygienist and Mt Hood CC graduate, who says she would  bring community, conservative common sense and communication to the position.
Director, Position 4, At Large: Jeff Dettman is a painting contractor and soccer club president, who has served on Centennial school board since 2003. Pam Shields is a business instructor at Mt. Hood Community College, and four-term faculty president.
Director Zone 2: Shar Giard, a licensed real estate agent who has served on Gresham citizens budget committee and the Housing Authority of Portland, currently holds this post. She runs unopposed.

David Douglas School District
Director, Position 4: Mike Centoni is the  owner of  Mike Centoni and Associates, a construction equipment firm. He has served as David Douglas director since 1987. Shemia Fagan is an attorney with Ater Wynne. A "David Douglas mom," if elected, she pledges to build partnerships with businesses family and the community.
Director, Position 5: Jane Doyle, recreation coordinator with Portland Parks and Recreation, has a background working with youth. She has volunteered as a soccer coach, with Girl Scouts, and on David Douglas PTA. Mike Price, VP and operations manaer for Price Industrial Service company graduated in business administration from Mt. Hood Community College. He has served on the school board since 2007.
Director, Position 7: Frieda J. Christopher, CEO of Cramer Fish Sciences, has a master's in Business administration from PSU. She has served on the school board since 1991. John Payne, an insurance agent, small business owner and daycare director, says he would prioritize efficiency and effectiveness to deal with the current economic crunch.

Parkrose School District
Director, Position 3: Guy Crawford, VP Operations at the Northwest College of Construction has a master's degree in organizational management. He has served on Parkrose School Board since 2007 and is unopposed.

Director, Zone 3: Three candidates are running for this position. Christine B. Nelson is an artist, mother, designer with a masters in Psychology from PSU. She has served as a precinct committee person and would promote basic literacy and child-centered education. Martha Perez is a customer service professional with H&R Block. A PSU Sociology graduate, she is a political activist working on health care, energy efficiency, land use planning and tax use. Bobbie Regan currently holds the Director position (since 2003). A marketing director who has worked as a legislative assistant in the US Congress she has volunteer experience with the Oregon School Boards Association and PTA,  and co-founded HOPE ( Help Out Public Education). Her endorsers include, Ted Wheeler, Charles Hopson, Jeff Cogen and Stand for Children.

Reynolds School District
Director, Position 1:Robert E. Lee, director of government affairs and a health policy analyst, is a graduate of Sam Barlow High School with a masters in public health administration from PSU. A reserve deputy in Multnomah County Sheriff's Office, he has been a precinct committee person. Endorsers include Lew Frederick, Laurie Monnes Anderson, Jefferson Smith, Stand for Children. Gerry Meaney is a retired US Army Lieutenant Colonel and financial analyst with Bonneville Power Administration. He has seved as precinct committee person and has three grandchildren in district schools.
Director, Position 5: Richard Filbert is a retired food ingredients sales person, building material importer and US Army instructor.  He says the district has enough money but needs more prudence. Tamara Schaffner is a Housing Authority of Portland employee with a BSc. in Organizational communication from the University of Portland. She states she will bring her experience as a mother and with disadvantaged individuals to district challenges.
Director, Position 6: Dane Nickerson, a Madison High and University of Oregon graduate, works as a US Bank branch manager. He is the current Director and runs unopposed.
Director, Position 7: This is a three-way race. Brad Fudge, president of a storage company, has an MBA from the University of Portland. He has served on the City of Fairview Planning commission as well as its Parks Committee and Troutdale Summerfest. Bruce McCain, is an attorney, a former Captain with Multnomah County Sheriff's Office, volunteer athletic official and labor law instructor. A member of the  Oregon State Bar since 1991, he has endorsements from the Troutdale Mayor Jim Kight, Fairview mayor Mike Weatherby and  Stare Rep. Matthew Wand. Michael D. Smith, is a retired sheet metal worker and union steward who completed a contract negotiation program at the University of Oregon. A Jefferson High graduate, he has served on the board of directors of DePaul Drug and Alcohol Treatment Center and Depaul Youth Center. His endorsers include Multnomah County Commissioner Loretta Smith and Stand For Children.