By The Skanner News
Published: 30 November 2005 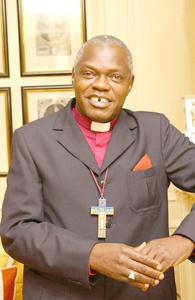 LONDON—With drums beating time to a favorite African hymn, Uganda-born John Sentamu was enthroned Wednesday as the first Black archbishop in the Church of England.

The drums resounded as Sentamu traveled by boat along the River Ouse from his official residence to the ceremony celebrating his becoming the 97th archbishop of York, the church's second-highest cleric after the archbishop of Canterbury.

Inside York Minster, 20 dancers in leopard-print outfits, their heads covered in feathers of red, white and black, performed a dance of rejoicing and thanksgiving in front of a 3,500-strong congregation.

Clad in a bright blue and yellow cope and mitre, the 56-year-old Sentamu joined the drummers at one point in the ceremony.

Sentamu on Oct. 10 became the first Black archbishop in the nearly 500-year history of the state Church of England, founded when King Henry VIII broke with the Vatican over his desire to divorce his first wife, Katherine of Aragon.
His elevation makes him a candidate to one day become archbishop of Canterbury, spiritual leader of the Church of England and the worldwide Anglican communion. The last archbishop of York to move into the church's highest position was Donald Coggan, archbishop of Canterbury from 1974 to 1980.

In his sermon, Sentamu quoted Michael Ramsey, a former archbishop of York and Canterbury, by asking: "Why have we in England turned this glorious gospel of life in the Spirit into a cumbersome organization that repels, and whose people are dull and complacent?"

He encouraged outreach to the disadvantaged and followers of other religions.

"I would urge people who are judgmental and moralizing as followers of the Prince of Peace, the friend of the poor, the marginalized, the vulnerable — I bid you, by the mercies of God, to go and find friends among them," Sentamu said.
"Christians, go and find friends among Buddhists, Hindus, Jews, Muslims, Sikhs, agnostics, atheists," he continued.
"Not for the purpose of converting them to your beliefs, but for friendship, understanding, listening, hearing."

Sentamu took his oath on a 1,000-year-old decorated copy of the Gospels and was presented with a silver pastoral staff that has been used in the minster since 1688.

He washed the feet of three children as a sign of his desire to serve.

Sentamu has shown a willingness to tackle difficult issues. He said in a newspaper interview he would be happy to ordain women as bishops if the Church of England changed its rules to allow them.

He also has been part of a committee attempting to mend an international rift in the church opened by the appointment of an openly homosexual bishop in the U.S. Episcopal Church. He has urged more conservative African primates not to break with the Anglican Communion and called for reconciliation.

Sentamu moved to Britain in 1974 after clashing with the regime of former Ugandan dictator Idi Amin. In 2002 he became bishop of Birmingham, Britain's second-largest city, and in June the government announced his appointment to York.