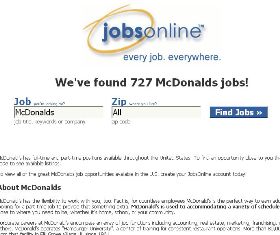 According to the Oregon Employment department, the economy has been slowly gaining jobs in most industries over the last two years.

But according to state employment economist Nick Beleiciks, every couple hundred jobs added over the last two months has to be tallied against the large numbers of jobs lost during the Great Recession.

"The (finance) industry added 500 jobs from February to March," he told The Skanner News. "That comes after major losses … so they only really added 100 jobs over that period."

Job losses have been so severe, for example, that McDonalds' recent advertising blitz to add 50,000 jobs across the country is really a drop in the bucket for the Pacific Northwest.

For Oregon's 161 McDonalds – 24 in Portland -- there are 580 job positions to fill. Western Washington's McDonalds contingent of 190 stores is hiring 640 workers, but one industry can't shoulder the burden alone.

"There are over 200,000 unemployed people right now," Beleiciks said. "It's not even enough to put a dent in the rate."

Luckily, the seasonally adjusted unemployment rates for Multnomah County show a steady improvement over past two years. The economy in Multnomah and Washington counties has officially stabilized, according to the Oregon Employment Department.

For all industries, except the financial industry, job growth since mid-2009 has remained positive, adding jobs throughout the year. The most jobs have been added in professional and business services, adding nearly 4,000 jobs over the year.

Beleiciks said even the finance industry has improved since the end of 2008, if ever slightly. Industries included in this label include some of the biggest losers in the housing bubble and technology sectors – from the banks and realtors who profited off the housing market to all those workers who once stocked and managed the libraries of DVDs at Blockbuster, Hollywood Video and other failed rental business models.

He said the slow decline in unemployment – calculated by a comprehensive survey of households in the state – is natural following the steep rise in joblessness at the beginning of the recession. He said that in some cases the unemployment rate can actually rise slightly following a recession as more people reenter the job market looking for work.

In Region 2 – which consists of Multnomah and Washington counties – seasonal hiring in the spring might include jobs in construction, real estate, retail and leisure and hospitality.

The other industry that seems almost recession-proof is the all-mighty health care industry. According to Jessica Nelson, Oregon employment economist, that industry is riding high due to a number of factors, including a large number of older people, the higher incidence of illness and injury in that age group, improvements in treatment which prolong life, and decreased use of dentures.

Nelson does say that the industry may hit a snag or two in the near future, as government budgets – still strained from the Great Recession – may impact the growth of health care.

And despite the fact that the health care industry posts good average wages, those numbers can be smoke and mirrors to many.

Like most of the jobs being created now, many in health care are low wage, according a recent report by the National Employment Law Project. Without advanced education and training, it's unlikely that many in the unemployment lines will obtain the $73,000 mean wage that some of the odd 24,000 registered nurses in Oregon earn.