Guard the Tomb of the Unknowns

In honor of the anniversary of its independence from Britain, the United States observes a number of traditions, both joyous and solemn. Along with the fireworks, the cookouts and the music, a more somber recollection takes place -- the ongoing changing of the guard at the Tomb of the Unknowns in Arlington, Va. 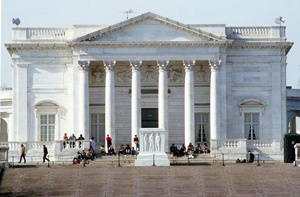 The tomb, in Arlington National Cemetery, contains the remains of unidentified American soldiers from World Wars I and II, the Korean Conflict and the Vietnam Conflict. Inscribed with the words "Here rests in honored glory an American soldier known but to God," the tomb is guard 24 hours a day, 365 days a year by members of the 3rd U.S. Infantry, "The Old Guard."

Far from a sweetheart posting, the guards at the Tomb of the Unknowns must abide by guidelines far more strict that any other in the United States Armed Forces.

For a person to apply for guard duty at the tomb, he must be a male between 5 feet, 10 inches and 6 feet, 2 inches tall. His is waist size cannot exceed 30 inches. He must commit two years of his life to guard the tomb, live in a barracks under the tomb and cannot drink any alcohol on or off duty for the rest of his life. He cannot swear in public for the rest of his life and cannot disgrace his uniform or the tomb in any way.

After two years, each guard is given a wreath pin that is worn on his lapel signifying that he served as guard of the tomb; only 400 are presently worn. The guard must obey these rules for the rest of his life. 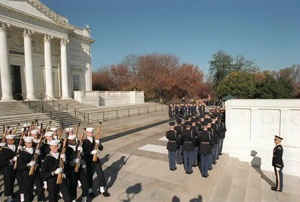 The guards' shoes are specially made with thick soles to keep the heat and cold from their feet. Metal heel plates extend to the top of the shoe in order to make a loud clicking noise as the guards come to a halt. There are no wrinkles, folds or lint allowed on their uniforms. Guards dress for duty in front of a full-length mirror. Every guard spends five hours each day getting his uniform ready for guard duty.During his first six months of duty, a guard cannot talk to anyone, nor watch TV. All off-duty time is spent studying the lives of the 175 notable people laid to rest in Arlington National Cemetery. A guard must memorize who they are and where they are interred.Among the notables are President William Howard Taft, the boxer Joe E. Lewis and Medal of Honor winner Audie Murphy -- the most decorated soldier of World War II -- of Hollywood fame.In 2003, as Hurricane Isabel was approaching the Washington, D.C., area, the U.S. Senate and House took two days off in anticipation of the storm. On the ABC evening news, it was reported that because of the dangers from the hurricane, the soldiers assigned the duty of guarding the Tomb of the Unknowns were given permission to suspend their assignment.They respectfully declined the offer with the words, "No way, Sir!"Soaked to the skin, marching in the pelting rain of a tropical storm, they said that guarding the tomb was not just an assignment, it was the highest honor that can be afforded to a serviceperson.The tomb has been patrolled continuously, since 1930.