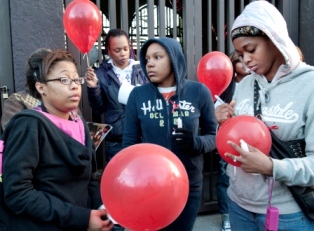 The disappearance of Yashanee Vaughn struck a chord with teens the city. Now police say that the 14-year-old is dead. And another teen, 16-year-old Parrish Bennette, awaits trial in the juvenile detention center charged with manslaughter. He has pleaded innocent. Meanwhile her body remains missing.

We don't know yet what happened to Yashawnee Vaughn and whether Bennette was responsible. But what's clear is that the case is raising all kinds of questions and concerns about teen violence.

To answer some of those questions, we decided to investigate the facts about teen dating violence.

What's The Problem?
"Nationally the statistics show that one in four women will experience intimate partner violence in their lifetime," says Vanessa Timmins, a domestic violence specialist with Multnomah County. "And the figures show there is a greater risk for young people."
In fact, girls aged 16-24 are more vulnerable to intimate partner violence than any other age group, according to a 2008 national study by the nonprofit Love is Respect, for Liz Claiborne.  Love and Respect is offering live coverage of Wednesday night's episode of The Real World dealing with dating violence. Watch here.
"They are so new to relationships that they don't have a road map of what a healthy relationship feels like," Timmins says.
The Love is Respect study also found that:

Who Is At risk?
Both boys and girls can become victims, although the kinds of abuse they experience differs. Girls are more likely to threaten self-harm, pinch, kick or scratch, while boys are more likely to seriously injure their partners. Gay, lesbian, bisexual and transgendered youth can become victims. Victims can belong to all races, income levels, religions and social classes. What does make a difference are the kinds of supports available when it comes to leaving an abusive relationship.
"What matters is: Do girls have the resources to get out of a relationship?" Timmins says. "Poverty plays into that and so does drug and alcohol abuse. Family makes a difference. Do they have a mom or dad there to notice? Is there violence in the family that normalizes what's going on? That's not going to impact whether they get into a situation. But it will influence the resources they have."

How Can Teens Recognize an Abusive Relationship?
Domestic violence experts stress that abuse tends to follow a pattern, where one partner is trying to control the other. And the abuse tends to get worse over time. Any kind of slapping, hitting or physical violence clearly is abuse. So is any kind of forced sex. But physical abuse may not emerge until later in the relationship. Emotional abuse may be more difficult to recognize. It can range from telling you nobody else will love you, saying that you're ugly, all the way through threatening suicide if you leave the relationship.
"Abusers can be very charming and they don't always leads with violence," Timmins said. 'So there can be a lot of romancing in the early stages.
"The common thing we see is an attempt to isolate the victim," Timmins said. "Isolation, and especially social isolation, is very common in youth violence. The perpetrator tries to get in between their partner and their family and friends."
Timmins said perpetrators often manipulate their partners in subtle ways.
Warning signs may include:

Timmins said the most important warning signs are your own feelings about the relationship. Healthy love does not involve fear, pain and emotional turmoil.
"Young people often have a stereotype of what intimate partner violence looks like," Timmins said.
"So if they don't have black eyes or bruises they question their own feelings of lack of safety."
But if you don't feel safe, then you should pay attention to that feeling, she said.
"Trust yourself. You have a right to be treated with respect. And you have a right to leave a relationship."
The bottom line is that: Love Shouldn't Hurt.

What's Sex Got To Do With It?
Three quarters of teens report beginning girlfriend/boyfriend relationships before the age of 14, according to Love is Respect. The risk of these relationships becoming abusive is greater for teens who become sexually involved. The study found that 69 percent of those teens who had sex by age 14, said they have gone through one or more types of abuse in a relationship.
It's important to note that only 11 percent of girls and 14 percent of boys have had sex by age 15, according to research from The Guttmacher Institute. But by age 19, 70 percent of teens have had sexual relationships, and the average age of first sexual experience is 17. One in five high school girls say a partner abused them physically, emotionally or sexually.
Parents often do not know what's happening in their teens' relationships. Only 33 percent of teen victims say they told anyone about it.

Make the Abuse Stop, But How?
Teens who feel they are in a relationship spiraling out of control should pay attention to their feelings.
For victims the priority is to tell someone and get help.
"You need to know that it's not your fault and that you don't deserve to be hurt," Timmins says.
"So find a way to tell someone what's going on: a parent or if you can't tell a parent then find a safe adult. I would recommend a school counselor, a clergy person or a teacher. Tell them and if that person doesn't help find another safe person who will."
Abusers too can seek help to change their behaviors, Timmins said.
"There is a lot of room for growth and change for young people. Batterers' intervention programs are available. Healthy relationship education classes can really help young men who simply don't have the tools and knowledge about healthy relationships." 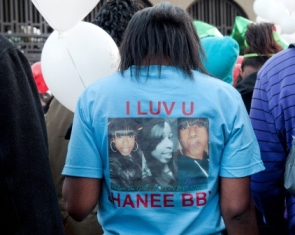 Friends and Safe Adults Can Help
Adults can help by believing the victims and helping them find resources. Safety is crucial because the most dangerous time for victims is when they are leaving the relationship.
"Stick with them and let them know you don't have all the answers but you will help them get to the right people," says Timmins.
Teens can raise their concerns with their friends. "Tell them you're concerned for them and this is why," Timmins said. "Say you've learned something about domestic violence and you see these red flags. If the survivor says no, leave the door open. You don't have to talk someone out of their feelings or blame them."
Teens feel like they are snitching when they go to an adult, but it's very important to do that because domestic violence escalates. "If it's not dealt with it can become very dangerous," Timmins says. "It does happen – women die."

PHOTO CREDITS:Photographer Julie Keefe captured these shots of attendees at a vigil in Powell Park, to honor Yashawnee Vaughn, the Portland girl who went missing March 19. Police say she is dead and they have charged another teen, Parrish Bennette with manslaughter. He has pleaded innocent. The facts of the case are known, but the case has raised fears about teen dating violence.