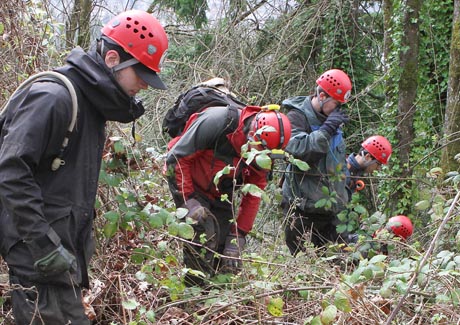 Portland Police Spokesperson Lt. Kelli Sheffer told The Skanner News that crews looking for evidence in the murder of 14-year-old Yashawnee Vaughn were not searching Rocky Butte Park Monday. It is not clear when or where the search will continue.

She said crews had planned to scour about 200 acres of the wooded and steep terrain of Rocky Butte, and had completed about three quarters of that goal.

"They are not done searching," she said.

Investigators are "being very diligent to separate out information that is not relevant" to the case and are encouraging members of the public to come forward with any information that might lead to Vaughn's remains. Crime Stoppers is offering a $1,000 reward to information that will help solve the case. People can report anonymously to Crime Stoppers, on the web at http://www.crimestoppersoforegon.com or via telephone at 503-823-HELP.

Meanwhile Vaughn's friends and family on Facebook are calling for the a telephone campaign to the Mayor's office to reinstate the search, even as the City of Portland lowered flags to half-mast Monday and City Commissioners invited her family to appear at Wednesday's council session.

Sheffer said they were not revealing whether or not there were additional suspects or other areas that the Multnomah County Search and Rescue would be searching.

The suspect in the Vaughn murder case, 16-year-old Parrish Bennette, is being held on first-degree manslaughter charges after a juvenile judge told prosecutors they didn't have enough evidence to charge for murder.  A grand jury is convening today to review whether or not there is enough evidence to indict Bennette.