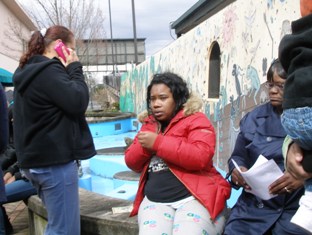 It's been nearly two weeks since 14-year-old Yashawnee Vaughn was last seen or heard from.

On Thursday, March 25, friends and family gathered at the Northeast Precinct to get the attention of a police department and media they say wasn't treating the case seriously enough. Pictured at left is Vaughn's mother, Shaquita Louis, at the rally.

The Skanner News reported on the case, posting photographs and a story, within hours of learning of Vaughn's disappearance.

At the time, Police spokesperson Lt. Kelly Sheffer told The Skanner News that Vaughn's disappearance was being treated as a runaway, but clarified that all missing youth are now automatically treated as "missing." Although there was no evidence that indicated Vaughn had been abducted, Sheffer said detectives had interviewed certain family and friends. As of Thursday, they had not contacted the girl Vaughn had spoken to last. 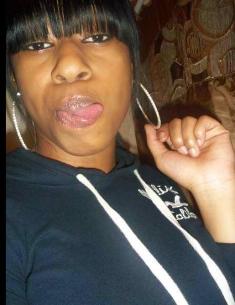 Portland police announced on Monday, March 28 that because investigators have been unable to locate the minor, that she might be at risk.

Sheffer said the crossover of a missing persons or runaway case is judged independently on the facts. Although many of Vaughn's family invoked the name of Kyron Horman — the 7-year-old missing since June 2010 that resulted in exhaustive land and water searches and millions in investigative costs — to question why nothing more had been done about Vaughn, Sgt. Catherine Kent of North Precinct said the main difference in the two cases is age.

At 7, Horman is largely unable to care for himself. At 14, Vaughn is independent and old enough to ride public transportation on her own. She has also been cited several times for misdemeanor crimes and is currently wanted in connection with an assault, say police. The face that she's been reported as a runaway before may have also led police to believe she might have done it again, police say.

Sgt.  Kent told The Skanner News that there are reports of runaway teens everyday in Portland. She couldn't comment specifically about the Vaughn case, as she wasn't privy to the details, but said that many teens willfully leave home.

"We could argue that any 15-year-old living on the street is endangered, but they would say something different," Kent said.

"Unfortunately we have a lot of runaway kids. On a day-to-day basis we could be taking seven (calls a day)."

Multiple friends and family interviewed during Thursday's gathering said that nothing indicated that she was running away.

Shandrea Farve, Vaughn's cousin and close friend who was planning to meet with the girl the night she disappeared, said she was in a good, normal mood the night she last heard from her. According to phone records obtained by family, Farve was the last person to speak with Vaughn.

She was last seen by family members waiting for the number 72 bus at 82nd Avenue and Thompson Street near Madison High School. Farve and Vaughn were planning to meet and hang out, but before Farve could establish a meet-up spot, Vaughn uncharacteristically stopped answering her cell phone. Her Facebook account, heavily used by the teen prior to her disappearance, has also not been used since.

Vaughn is a student at Helensview School, she weighs just over a hundred pounds, has fairly dark complexion with almond-shaped eyes and a big smile, and typically wears her hair  at shoulder length.

A Facebook group page has been set up to gather any information about Yashawnee.