Chris King Special to the NNPA from the St. Louis American
Published: 17 May 2010 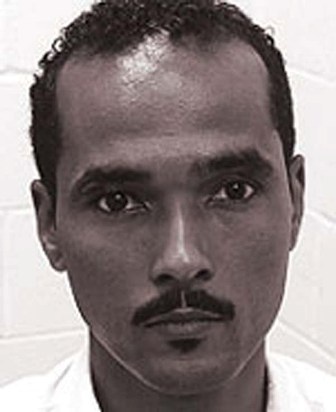 ST. LOUIS (NNPA) - One day after a momentous hearing had been scheduled for death row inmate Reginald Clemons, Amnesty International came to St. Louis to release a new report on his case and to pledge funding and volunteers to the determined, grass-roots Justice for Reggie campaign.
National and regional representatives of the international human rights organization last week gathered with local and regional advocates for Clemons in front of the old Municipal Courts building in downtown St. Louis, where Clemons was tried and sentenced to death in 1993 for allegedly participating in the murders of Robin Kerry and Julie Kerry as an accomplice.
"We are here to see justice is delivered in our own backyard, not only in Iran and Iraq," said Jamal Watkins, Amnesty International USA's regional director for the Midwest.
Watkins was joined by Laura Moye, who directs Amnesty International USA's Death Penalty Abolition Campaign.
"Amnesty International is here today to raise the volume in the call for justice in a case that exemplifies the very worst problems in our death penalty system," Moye said.
In saying the group aims "to raise the volume," Moye acknowledged ongoing efforts by the Justice for Reggie campaign, led by Jamala Rogers, Clemons' mother Vera Thomas and his stepfather, Bishop Reynolds Thomas. This campaign has been embraced by the American Civil Liberties Union and the NAACP. Representatives from all of these groups spoke briefly on May 11.
Amnesty's timing in releasing its 16-page report, Death by Prosecutorial Misconduct and a "Stacked Jury," on May 11 seems tied to a date that should have been pivotal for Clemons, but was not. Judge Michael Manners, the special master appointed by the Missouri Supreme Court to gather new evidence and review the case, originally had scheduled May 10 as the new hearing date for Clemons.
However, the hearing was postponed after Nels C. Moss, who prosecuted Clemons in 1993, told the Missouri Attorney General's Office on March 2 "that he had recently been told of the existence of a rape kit located at the St. Louis Police Department Crime Lab," according to a letter faxed to Manners by the AG's office. 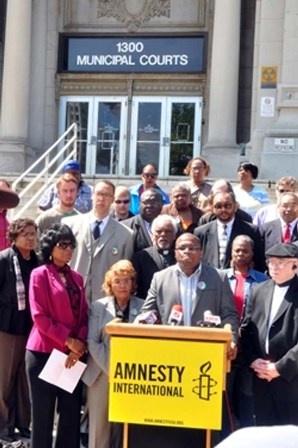 A rape kit is a body of forensic evidence collected when a rape is suspected; it does not imply that a rape has occurred. This evidence was collected from a body retrieved from the Mississippi River that was identified as Julie Kerry's corpse. The body of Robin Kerry was never found.
On March 25, Manners was informed that Clemons' attorneys and the AG had agreed to submit the new evidence to DNA testing, forcing the postponement of the May 10 hearing date. No new date has been set.
May 10, 2010 was scheduled to be a culminating moment in a shocking and historic process that started on June 30, 2009, when the Missouri Supreme Court appointed Manners – a 16th Circuit judge in Indepedence – as special master with subpoena powers to reconsider Clemons' most recent Writ of Habeas Corpus. This opened a new evidence phase in the case of a man who had been condemned to die less than two weeks earlier, on June 17.
The June 17 execution date – which had been set by the same court that would suddenly reopen the Clemons case to new evidence – was suspended when a federal court issued a stay. The State had condemned Clemons to die while he had a federal appeal pending concerning the Missouri Department of Corrections' ability to administer its own execution protocols without violating his constitutional protections against cruel and unusual punishment.
While detailed and passionate, the Amnesty International report covers no new ground. It restates familiar points about Clemons' allegations – filed the day after he was interrogated in 1991 – that St. Representatives of Amnesty International, joined by other supporters of death row inmate Reginald Clemons.

Louis detectives violated his constitutional rights to silence and counsel and beat a scripted confession out of him.
Police denied these accusations, though Judge Michael David ordered Clemons taken to the hospital for treatment of injuries when he was arraigned after the interrogation. Further, the St. Louis Metropolitan Police Department settled with Thomas Cummins for $150,000 for accusations of police brutality – against some of the same detectives, working the same case. Cummins, a cousin of the Kerrys', was the first suspect in the murders and initially confessed to a role in his the girls' deaths. He testified against Clemons as Moss' star witness and received his settlement from the police on the day Clemons was sentenced to death.
Clemons' confession – to rape, not murder – was permitted as evidence in court, which should not have been done if the confession was coerced and obtained without a lawyer after counsel had been requested.
Though Clemons was never prosecuted on rape charges, they were used against him as a "sentence enhancer" when Moss successfully pushed for the death penalty.
The Amnesty report also rehashes familiar evidence that the judge allowed Moss to stack the jury against Clemons by improperly excluding jurors. Clemons, one of three African-American youth accused of murdering two young White women, was judged by a jury with only two Black jurors (out of 12) in a city that is slightly more than half Black.
The Amnesty report cites a 2002 federal ruling on a Clemons appeal that "vacation of the death penalty is required when even one juror is improperly excluded. Here there were six."
The Amnesty report takes familiar aspects of the Clemons case and places them in the context of similar national and international cases. For example, the lack of physical evidence in the Clemons conviction – which makes the sudden surfacing of the rape kit so controversial – has drawn comparisons to the Troy Davis death penalty case in Georgia, which is being reopened under U.S. Supreme Court mandate.
Speaking on behalf of the Justice for Reggie campaign, Jamala Rogers thanked Amnesty for the report "and for committed resources in the future." Watkins of Amnesty said the group had committed volunteers and funds, though there was no set budget for the campaign.
Redditt Hudson of the ACLU of Eastern Missouri said Amnesty's decision to join the campaign is "an amazing boost. We are closer than we have ever been to actual justice for Reggie Clemons, Robin Kerry and Julie Kerry."
The Amnesty report is available at www.amnestyusa.org/reggie.