By Brian Stimson of The Skanner News
Published: 07 April 2010 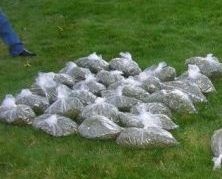 Petitioners will soon be collecting signatures to put the Oregon Cannabis Tax Act on the November 2010 ballot.
The ballot initiative would end the prohibition on adult marijuana use under state law, creating a licensed sales system through state stores and also ends restrictions on hemp production.
The measure restricts public consumption and sales to minors. Current driving under the influence restrictions and penalties would remain in full force.
A court challenge by Bradley Benoit of Beaverton had delayed the approval of the official ballot title. The Oregon Supreme Court denied to review Benoit's petition, which sought to clarify the ballot's summary language. The bill directs Oregon Attorney General John Kroger to defend federal challenges to the law. Benoit wanted the summary to describe in detail attorney general's role in a potential court case.
According to Oregon NORML, a national nonprofit that advocates for the reform of marijuana laws, the law will help pump millions into state coffers when authorities are able to tax the vast, underground marijuana market.
Madeline Martinez, executive director of Oregon NORML, says it's time to stop wasting money on prosecuting marijuana crimes and losing money on an industry to which hundreds of thousands of Oregonians have contributed. She said her organization is in the process of calculating the lost revenue from police seizures, despite representing only a small fraction of the illegal cannabis on the market.
Signature gatherers will need to collect 83,000 valid signatures by July 2 in order to qualify for the November ballot. Martinez said their signature gathering group – Democracy Resources – said they will be able to return at least 83,000 valid signatures in 60 days.
There is no formal opposing organization, although Martinez expects some law enforcement groups to oppose it.
The Oregon petition comes on the heels of a California initiative that would regulate and tax cannabis for adult consumers in that state. Supporters submitted 694,248 signatures on March 24, well over the 433,971 needed for certification to be on the ballot.
In Washington state, Sensible Washington is working to gather 241,000 signatures by July 2 for a ballot initiative that would remove marijuana from the state's list of controlled substances. It would still make it illegal for those under age 18 to possess.
The Oregon Pharmacy Board is also in the process of downgrading marijuana from a schedule I substance to a Schedule II through V substance.
For more information, visit www.cannabistaxact.org