By Brian Stimson of The Skanner News
Published: 04 March 2010

A group of concerned parents met with Jefferson High School Principal Cynthia Harris Wednesday night to discuss concerns they have over the state of the athletic department. The parents were concerned that the football program in particular was being neglected by school leadership. 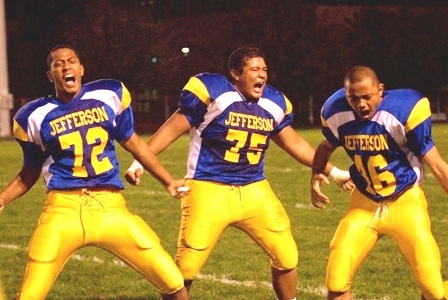 Before the meeting commenced, The Skanner was told by Harris that we were "not welcome" at the meeting and promptly told to leave.
"Who invited you?" she asked.
She said when she was ready to have a public meeting about the concerns of parents, she would give the media a call. Harris did not know who was going to show up for the meeting and declined to say who organized the meeting. She said it was not for the public, especially not the news media.
Matt Shelby, district spokesman, said it's not unprecedented for principals and other school officials to hold meetings not considered "public meetings" under Oregon law. He said the district doesn't have a specific policy dealing with accessibility of meetings such as this.
Cliff Pfenning, a reporter for www.oregonsports.com and Jefferson parent, attended the meeting and said parents were there "airing their grievances about treatment by the

school and especially the Athletic Director Mitch Whitehurst during the past two seasons."
Specifically, Pfenning said parents allege that football coaches were not reimbursed by the school for at least two out of town trips. The Oregon School Activities Association typically reimburses schools for out of town sporting events.
Athletic Director Mitch Whitehurst says the coaches are reimbursed at the end of the season.
"They all got to the coaches," he told The Skanner News.
Whitehurst said he didn't know where the allegations were coming from, other than people associated with the football program. Pfenning says some parents believe the basketball program receives more attention than the football program.
Jefferson boys basketball is on track to win three state titles in a row. The Demos face off at Jefferson High against South Albany on Saturday.
The district and Harris did not immediately return phone calls before deadline. Please check back to www.TheSkanner.com for updates to this story.