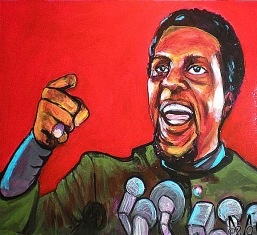 Or your kids have probably spent time engrossed in an art project she's led – including scores of students just in the past few weeks.
She's just as likely to be hanging her jewel-toned canvases in banks or government buildings as she is to be offering support to a grieving community through art, as she did in December at the Community Healing Ceremony organized by the Healing Roots Center for the Medina family after the death of their daughter and her young son.
Nevertheless you may never have heard her name. It's Mo – just Mo.
"I make a point of making sure that I'm involved," she says.
"I've taught out at the juvenile detention center for the past three years I just did a thing with Ockley Green where we did 80 self portraits with kindergarten through second grade, and instead of making it a visual portrait we did portraits about things that we like and things that we did representing us not what we look like."
Mo was the first African American Visual Arts scholarship winner at Portland State University – an honor her straight-A's allowed her to pull down four years in a row. 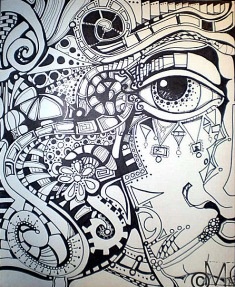