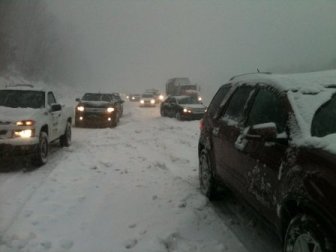 The powerful storms that pounded the South will continue Wednesday, a day after tornadoes ripped through several statesThe dangerous thunderstorms that packed house-shaking winds and left two people dead on Christmas were expected to move north and east Wednesday hitting Georgia, the Carolinas, Florida and much of the Eastern seaboard, the National Weather Service said.

Wednesday's expected severe storms are "capable of producing more widespread damaging wind gusts and have the potential for tornadoes," the weather service said.

Many in the South know all too well about tornadoes, as a slew of them turned Christmas into a fright fest.

David Saraceno spotted something ominous forming Tuesday as he sped down I-165 in Mobile County in Alabama. He was traveling with his wife and 1-year-old daughter to visit family when he saw the twister on the side of the road. His wife videotaped it.

"It looked like it was about two miles away from us," said Saraceno. "I put the pedal to the floor to try and get out of harm's way, but it seemed to be getting closer and closer."

Panicked, Saraceno got off the interstate near the town of Chickasaw, drove in a different direction and then turned around to go home. He couldn't go see family in that weather.

"We drove right back into a path of destruction," said Saraceno. "It appeared that the tornado turned and came over the interstate about three minutes away from where we would have been if I did not get off the interstate. We saw a roof that must have blown off a house. Cars were pulled to the side of the road. There was a lady whose windows were shattered. It was too close for comfort."

Saraceno was not alone. There were close to 30 tornadoes reported on Christmas, according to preliminary reports by the National Weather Service.

A 25-year-old man in Texas was killed after a tree fell on his pickup as he was driving on the northwest side of Houston, Harris County Sheriff's Deputy Thomas Gilliland said. Officials suspected high winds knocked the tree down.

A 28-year-old woman from Woodward, Oklahoma, was killed in an accident on a snow-covered two-lane highway.

Amanda Goodman was ejected from the SUV she was riding in after the driver lost control and struck an oncoming big rig, the Oklahoma Highway Patrol said. Goodman died at the scene while the driver and a 4-year-old passenger were taken to a hospital. They were listed in stable condition. The truck driver was not injured.

The storms also left a trail of damage in Mississippi.

Gov. Phil Bryant declared a state of emergency for several counties battered by the storm, a declaration that helps get support to victims.

"At least eight Mississippi counties have reported damages and some injures," Bryant said.

And those who would not have to brave severe thunderstorms would deal with heavy snow and bone-chilling cold Wednesday.

The National Weather Service issued blizzard or winter storm warnings stretching from the Deep South to the New England area.

There were blizzard warnings for parts of Arkansas, Kentucky, Ohio, Illinois, Indiana and Tennessee, the weather service said.

Ohio was expected to get hit hard with as much as 15 inches of snow coating parts of the northern county of Erie.