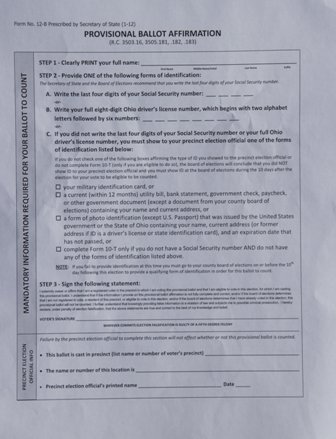 (CNN) -- Ohio's provisional ballots have the campaigns even more focused on arguably the most hotly contested state in the presidential election: Ohio.

"We are going to watch those ballots closely," said Obama senior adviser David Axelrod on CNN's "Starting Point." "We want to make sure that everybody's voice is heard in this election."

For its part, a Romney campaign official told CNN "we're paying attention" and "we'll be ready" if there is a need for a legal intervention in Ohio or anywhere else.

If vote totals are close, an official recount in Ohio could be ordered or one or more candidates or a political party could challenge the outcome in court.

Courts have ordered that voters, not officials at the polling locations, fill out provisional ballots - ballots used to record a vote if the voter's eligibility is in question. This leaves room for error and the possibility of a ballot improperly filled out to be discarded.

Just over 200,000 people voted using provisional ballots in the state in 2008 and Ohio's Secretary of State Jon Husted said around 200,000 will be cast on Election Day this time. Local election boards in Ohio are given up to 10 days to determine provisional ballot eligibility.

The politically diverse state of Ohio has 18 electoral votes. No Republican candidate has won the presidency without carrying the state.

Axelrod was confident in his campaign's chances in the Buckeye State.

"The fact of the matter is that every bit of data out of Ohio in the last few days has been very encouraging to us and particularly the early voting," he said assessing that their enthusiasm in the state comes from "cold, hard data" while the other side's "optimism is based on some unseen, hidden wave."