Video: Romney: 'No One Has Ever Asked to See My Birth Certificate' 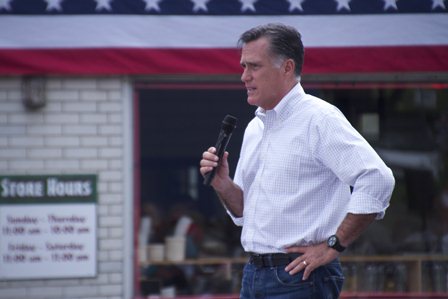 (CNN) -- Mitt Romney began his stump speech in Michigan on Friday with a joke which raised a sensitive issue: birth certificates.

"I love being home in this place where Ann and I were raised, where both of us were born," he said. "Ann was born at Henry Ford hospital, I was born at Harper hospital. No one has ever asked to see my birth certificate. They know that this is the place that we were born and raised."

Some Republicans, known as "birthers," have questioned the birthplace of President Barack Obama.

Obama's long-form birth certificate was released by the White House in 2011. It showed he was born in a Hawaii hospital on August 4, 1961. Only "natural born" citizens of the United States are eligible to be president.

Among the highest profile of those questioning Obama's birthplace is Donald Trump, who earlier this year endorsed Romney and has said he will have a high-profile role at the Republican National Convention next week. His calls for Obama to release the long-form certificate increased the drumbeat on the issue in the spring of 2011 before the White House gave it out. Despite the document being in the public sphere, Trump has continued to question Obama's birthplace in media appearances and in social media posts.

In a statement responding to Romney's comments, Obama campaign press secretary Ben LaBolt mentioned Trump and others who have raised the birth certificate issue previously.

"Throughout this campaign, Governor Romney has embraced the most strident voices in his party instead of standing up to them," LaBolt said. "It's one thing to give the stage in Tampa to Donald Trump, Sheriff Arpaio, and Kris Kobach. But Governor Romney's decision to directly enlist himself in the birther movement should give pause to any rational voter across America."

Romney senior adviser Kevin Madden said after the candidate's remarks, "The governor has always said, and has repeatedly said, he believes the president was born here in the United States. He was only referencing that Michigan, where he is campaigning today, is the state where he himself was born and raised."

In his Friday remarks, Romney's reference was to his own birth certificate, not that of Obama.