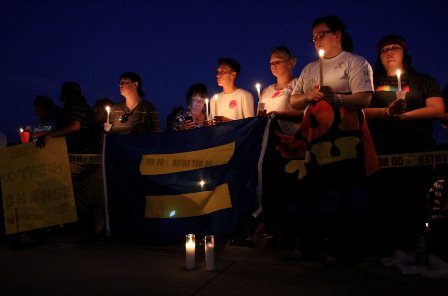 (CNN) -- A Nebraska "hate crime" that targeted an openly gay woman and that triggered responses from candlelight vigils locally to Facebook postings of support nationwide was staged by the alleged victim, authorities said Tuesday as they charged the woman with lying to police.

Charlie Rogers -- a former basketball player for the University of Nebraska who identifies herself as lesbian -- told police that three masked men entered her home on July 22, stripped her, tied her down, and carved homophobic slurs into her body before attempting to set her and the house on fire.

But the Lincoln Police Department said Tuesday that "the physical evidence conflicted with Charlie Rogers' version of events" and that "extensive investigation revealed numerous inconsistencies."

Her attorney, Brett McArthur, told CNN Tuesday night that Rogers had agreed as part of an arrangement to turn herself in, in exchange for a personal recognizance bond.

"She did not have to post any money" to be released, McArthur said, adding that his client pleaded not guilty to the charge of lying to police.

"She maintains her innocence. This has been kind of a kick in the gut as a victim to turn around and be charged," McArthur said.

In a news release, police cited DNA and pathologists' examinations that did not substantiate Rogers' original statements, and changes in her story during the investigation.

"These were serious allegations that garnered national attention and spread fear among local citizens," the police statement said. "A great deal of time and resources were spent investigating Charlie Rogers' claims in hopes of identifying and arresting the three suspects in this case."

Beth Rigatuso, president of Heartland Pride based in Omaha, organized a vigil that attracted over 1,000 people in the aftermath of the reported attack.

For her, the news that it may have been a hoax is "a pretty big blow."

"I don't feel betrayed as much as I feel sad for how, if this is really true...there is a lot of things going on with her," Rigatuso said. "It leads to a bigger problem in our society that someone would do this."

Rigatuso said she hopes people would not turn their backs on Rogers now.

The vigil she put together in Omaha raised more than $1,800, all of which was deposited in an account for Rogers.

"We'd like to get the funds returned to us so we can establish our own fund to support victims of anti-gay violence." Rigatuso said Tuesday.

McArthur, Rogers' attorney, said he "knows nothing" about the fund or how much money might be in it. He said it was in place before he became Rogers' lawyer.

According to the Lincoln Police Department complaint, Rogers, 33, provided information "she knew to be false" with the intent to "instigate an investigation of an alleged criminal matter."

Rogers reported to police that she was lying on her bed when the alleged attackers held her down and carved "derogatory words" into her arms and abdomen and "a cross" in her chest. She told police she was then rolled onto her stomach where more cuts were made.

But according to a deposition from Lincoln police investigator Lynette Russell filed as part of the complaint, Rogers bedspread was "evenly placed on the bed and no apparent sign of a struggle." A DNA lab test found no evidence of blood on the bedspread.

Russell also described a pair of white gloves found at the scene that Rogers had said were not hers.

"Ms. Rogers DNA profile was the major contributor to the DNA located on the inside of the gloves," Russell said.

Furthermore, the deposition said, the FBI sent photos of Rogers' cuts to a forensic pathologist, who believed the wounds to be self-inflicted.

"This opinion is based partially on the fact that the cuts appeared superficial and symmetrical, avoided sensitive areas of the body,...are accessible to the victim and follow the victim's frame of reference for reading and writing," the deposition said.

Rumors had been circulating in recent weeks in Lincoln and on the Internet due to the fact that police had yet to pinpoint any suspects. The urge to respond to rumors prompted Rogers to give her one and only interview.

"For people to think this doesn't happen here, it does," Rogers told CNN affiliate KETV on July 27. "It did."

She refused to discuss the incident itself during that interview.

Rogers' attorney at the time, Megan Mikolajczyk, told CNN her client was ready for a full interview early last week, but canceled saying "things have changed."

Mikolajczyk said Tuesday that she is no longer Rogers' attorney.

According to neighbor Linda Rappl, Rogers' showed up on her doorstep bloodied in the early morning hours immediately following the alleged attack last month.

"I was in shock," Rappl said soon after the incident. "She was naked, her hands were tied with zip ties. All I could see was a cut across her forehead and blood running down."

Rappl said she took the sobbing Rogers inside and wrapped her in a blanket before calling 911.