Get Ready to Pay More for Your Steak 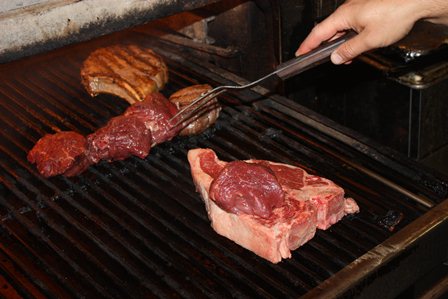 NEW YORK (CNNMoney) -- The drought that's spreading across the Midwest is already squeezing consumers, and it's only going to get worse, as the rising cost of soybeans and corn leads to higher prices for meat, peanut butter and other staples.

The price of ground beef could rise to about $2.88 per pound this year, a 4%jump from last year, when the average price per pound was $2.77, according to data from the U.S. Bureau of Labor Statistics and the U.S. Department of Agriculture. And if you want steak, get ready to pay 25 cents more per pound for sirloin, with the average price rising to $6.47.

Meat prices had already been moving higher, even before the drought took hold.

The price of sirloin steak rose more than 15% between June 2011 and June 2012, while ground beef rose more than 8% and chicken prices increased more than 6%, according to the BLS.

Beef prices may react a bit more slowly to the drought as ranchers work to manage their cattle inventory.

"Although supply of beef may be higher in the short term as a result, we can expect beef prices to rise in the long-term for consumers shopping at grocery stores," said Sageworks analyst Sam Zippin.

For chicken, the increase will be a bit more modest, but still significant. The price of chicken is expected to rise 5 cents this year to $1.34 per pound, according to the USDA. Eggs are also expected to increase, but only by 1 or 2 cents per dozen to $1.77 or $1.78.

The spreading drought has caused crops to wilt throughout farm country. Corn prices have spiked 20% in the past month, while soybean prices have jumped 15%. Corn is used in animal feed so any shortage can quickly ripple down to the consumer.

"Field corn becomes feed, and as the price of feed goes up, the price of animals, and animal prices, all go up," said USDA research economist Rick Volpe.

That includes dairy products. A gallon of whole milk is expected to go up to $3.66 per gallon, compared to last year's average of $3.57. This will take some getting used to for consumers, since the price had dropped roughly 6% last year.

Last week, the USDA projected big price increases across the board. The most dramatic projected increase of 4% to 5% will affect fats and oils, which contain soybeans. Those include margarine, which could jump to $1.91 per pound this year, and peanut butter, which is expected to hit $2.18 per pound.

"Soybean prices are under pressure from both the drought here and production problems in South America," said Volpe. "Those prices were already going up."

Indeed they were. The price of margarine rose more than 15% last year, while peanut butter surged a whopping 42%.