Weiner Says He Sent Explicit Photos of Himself 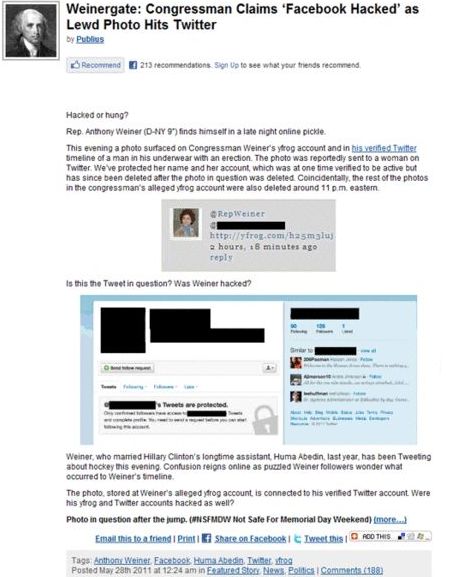 WASHINGTON (AP) -- Embattled New York Rep. Anthony Weiner's prospects for political survival dimmed precipitously on Wednesday with the appearance on the Internet of an X-rated photo said to be of the congressman - and the first calls from fellow Democrats for him to step down.

"In light of Anthony Weiner's offensive behavior online, he should resign," Pennsylvania Rep. Allyson Schwartz, a member of the party campaign committee's leadership, said in a statement that was quickly followed by similar expressions from other Democrats.

Separately, as the political scandal increasingly roiled the Democratic Party, several officials said that Weiner's wife, Huma Abedin, was pregnant. An official at the State Department, where Abedin serves as deputy chief of staff to Secretary of State Hillary Rodham Clinton, had no comment.

Weiner, 46, has admitted sending explicit photos and messages via the Internet to about a half-dozen women over the past three years. He vowed at a news conference on Monday to remain in office, and one lawmaker who spoke to him on Wednesday said Weiner indicated he still hopes to ride out the furor and remain in Congress. That lawmaker spoke on condition of anonymity, saying it was a private conversation.

But the appearance of a photo of a man's genitals added yet another aspect to what appears to be a sex scandal without actual sex in the age of social media. According to conservative blogger Andrew Breitbart, Weiner sent the picture of himself to one of the women with whom he corresponded online.

The Associated Press has not been able to independently confirm that the photo is of Weiner. On Wednesday, spokeswoman Risa B. Heller noted in a statement that Weiner had said at a news conference on Monday that he "has sent explicit photos. To reiterate, he has never met any of these women or had physical contact with them."

The photo made its way to the website Gawker by a circuitous route, after Breitbart showed it to the hosts of Sirius XM radio's Opie and Anthony Show.

By day's end Wednesday, at least six House Democrats had called for Weiner to step down.

Schwartz was the first, and politically the most significant because of her position as a senior leader on the Democratic Congressional Campaign Committee.

Weiner's predicament has rocked the Democratic Party, particularly the women who hold leadership posts and have faced a choice between calling for a resignation or hoping that refraining from doing so would lead him to quit without being told.

In the interim, few pass up the chance to signal to Weiner that he should step down.

The head of the Democratic Senatorial Campaign Committee, Sen. Patty Murray, told reporters during the day that Weiner's troubles "of course" complicate the party's efforts ahead of in the 2012 elections.

Sen. Dianne Feinstein, D-Calif. said, "I just view it with great surprise and dismay. That's all I can say."

Feinstein and Murray were first elected to the Senate in 1992, the so-called "year of the women" that was a watershed in Democratic political history.

The party's leader in the House, Rep. Nancy Pelosi of California has called for an ethics committee investigation to see whether Weiner's actions violated any House rules.

Pelosi and the party's chairwoman, Rep. Debbie Wasserman Schultz of Florida, declined to respond directly on Tuesday when the Republican chairman, Reince Priebus, urged them to say whether they believe Weiner should step down.

The Democratic National Committee has adamantly refused to comment, while a spokesman in Wasserman Schultz's congressional office has said only that she supports Pelosi's call for an ethics investigation. By contrast, the former Democratic Party chairman, Tim Kaine, has urged Weiner to quit. Kaine is running for the Senate in Virginia.

While declining to make any public comments since Monday, Weiner has been on something of an apology tour by telephone. He has contacted fellow House members and former President Bill Clinton, who officiated at the congressman's wedding to Abedin nearly a year ago.

The officials who spoke about the telephone calls did so on condition of anonymity, saying they were private matters.