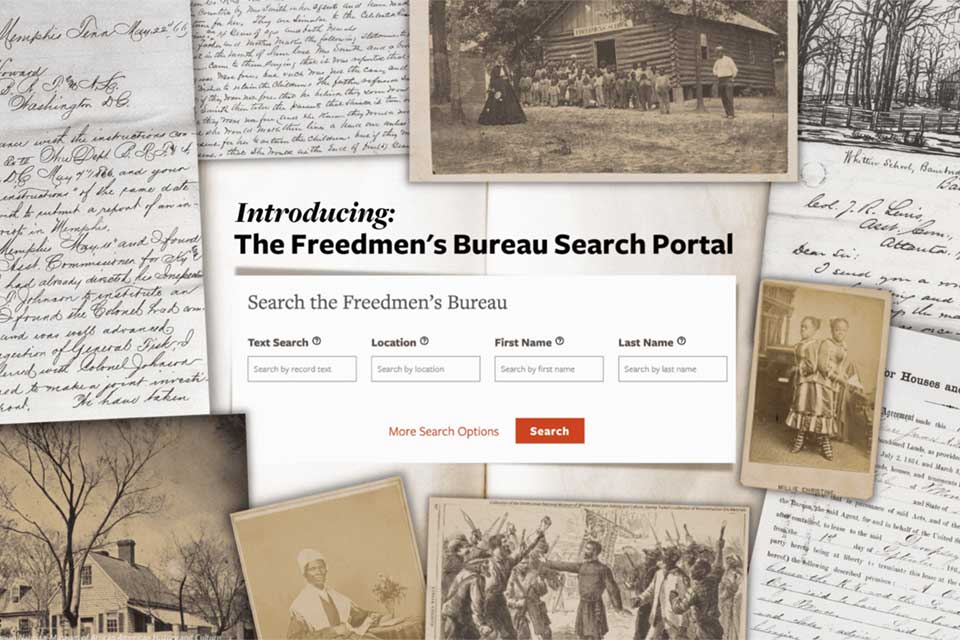 The Smithsonian’s National Museum of African American History and Culture (NMAAHC) announces the launch of the Freedmen’s Bureau Search Portal. The new comprehensive search platform is designed to help family historians and genealogists search for their ancestors and for scholars and students to research various topics found in over 1.7 million pages of Freedmen’s Bureau records.

The portal allows users to search records from the United States Bureau of Refugees, Freedmen, and Abandoned Lands, commonly known as the Freedmen’s Bureau. Congress created the Freedmen’s Bureau after the Civil War to assist in the political and social reconstruction of post-war Southern states and to help formerly enslaved African Americans transition from slavery to freedom and citizenship. From 1865 to 1872, the Freedmen’s Bureau created and collected over 1.7 million handwritten records containing the names and information of hundreds of thousands of formerly enslaved individuals and Southern white refugees.

The search portal combines data created by two different NMAAHC initiatives into a single searchable platform. In 2015, NMAAHC, FamilySearch International, the California African American Museum and the Afro-American Historical and Genealogical Society collaborated on a crowdsourcing project to index the names, dates and locations found in the records. Data created from the project—nearly 2 million indexed names—was transferred to the NMAAHC in December 2016.

Shortly after the indexing project was complete, NMAAHC and the Smithsonian Transcription Center began a crowdsourcing effort to fully transcribe all of the more than 1.7 million pages, including labor contracts, land leases, marriage certificates, hospital registers, ration orders, teachers’ reports and personal testimony. To date, over 400,000 pages of records have been transcribed and are fully searchable.

The portal allows users to search indexed data for specific names, places and dates and transcribed data for topics, subjects, institutions and any other keywords and phrases. By bringing these two data sets together, the Freedmen’s Bureau Search Portal creates unprecedented research possibilities and access to this invaluable set of records.

The portal and the ongoing Freedmen’s Bureau Transcription Project provide a better understanding of Reconstruction and post-emancipation African American life and allow African Americans to connect with their ancestors in a way that was previously thought impossible.

The museum is leading a volunteer effort to transcribe the digitized records of the Freedmen’s Bureau so they can be more useful for scholars and genealogists researching the Reconstruction era. To learn more about the Freedmen’s Bureau Project, the public can visit the Robert Frederick Smith Explore Your Family History Center on the museum’s second floor or the Smithsonian Transcription Center webpage to volunteer.