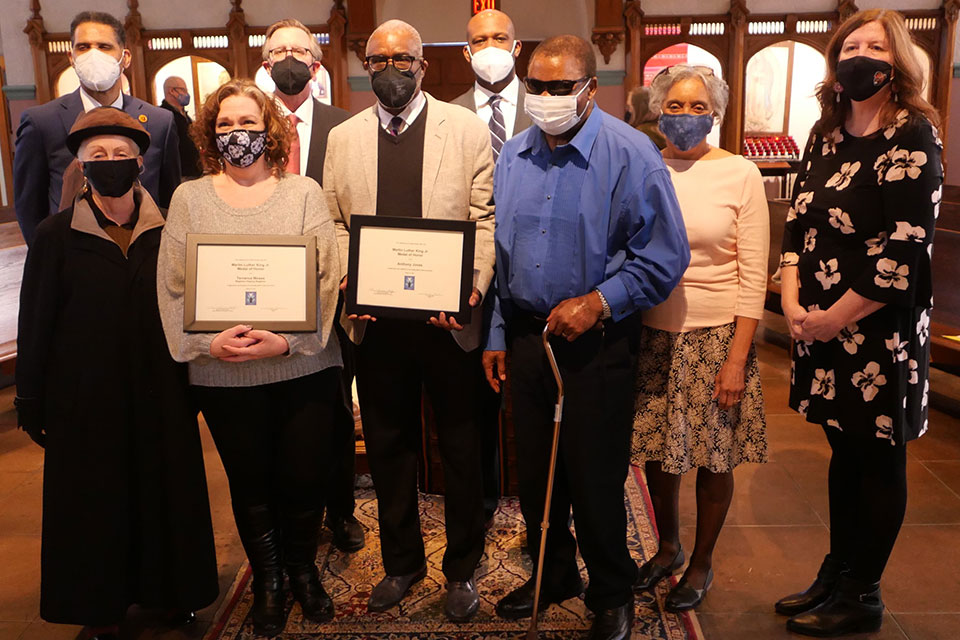 St. Andrew presented its annual Martin Luther King Jr. Awards at mass on Sunday, Jan. 16. Since 2002, the parish has honored people whose service embodies the values of Dr. King, who used nonviolence, civil disobedience and christian teaching to advance the cause of civil rights in America.

Two awards are given each year: one honoring a parishioner for works of service, and another an individual or group working for social justice in the greater metropolitan area. At the Sunday closest to the national holiday celebrating Dr. King, these awards reassert the parish’s belief in what Dr. King called, in his 1994 Nobel Peace Prize acceptance speech, his “audacious faith in the future of mankind.”

This year John Wolfe, committee co-chair, delivered a moving tribute to Dr. King in his introductory remarks. He reminded a pandemic-reduced but rapt congregation that King had been only 35 years old when he received the Nobel Prize, and described in cinematic detail the scene at the Lorraine Motel in Memphis, just four years later, when his life was taken by an assassin’s bullet. 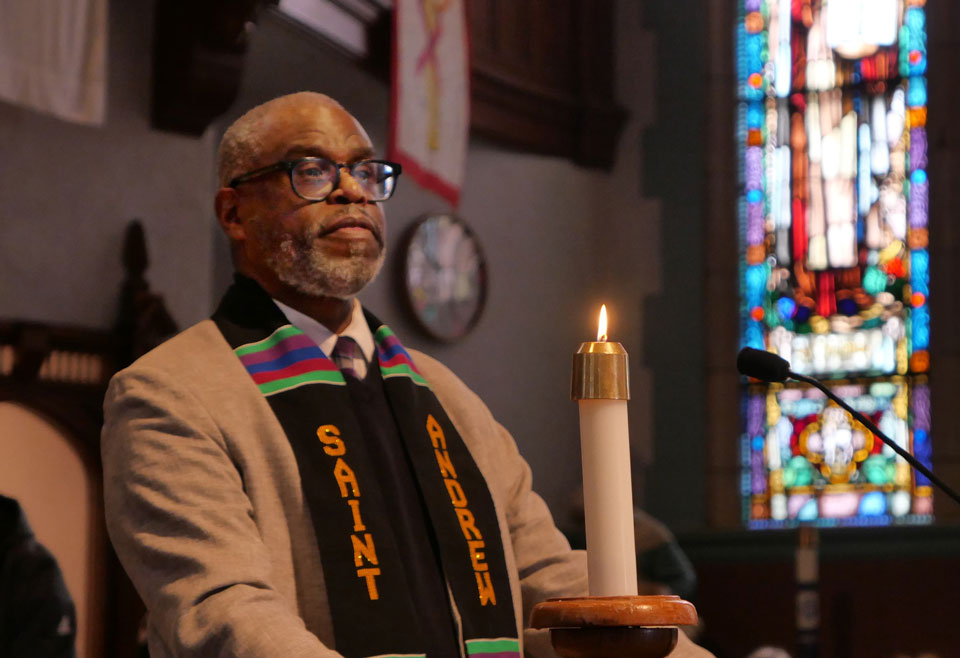 Tony Jones accepting the Parish Service award. (Photo/Fr. Leo Remington)The 2022 Parish Service Award honored the leadership and inspiration of Tony Jones, who is prominent both in the parish and in the African American Catholic Community of Oregon, where he is currently serving his second three-year term as chair. A graduate of Rutgers, Tony and earned his master’s in urban planning in Chicago at the University of Illinois.

In an emotional acceptance speech, Tony thanked, with “deep gratitude and humility,” a long list of people who have touched and helped him along the way. The litany ended with two very special friends: Trish Bradley, whose pride and admiration for Tony had, moments before, shined through her announcement of the award; and his mentor, Robert Hughley, Ph.D., a civil rights activist since the late 40s, when he and his college roommate, Ralph Abernathy, agreed to take a bus ride to Georgia and risk arrest. Like Hughley, who turns 96 in February, Tony is a convert to Catholicism and a man of deep faith.

Tony concluded with an affectionate tribute to his foster mother, Ruby Dixon, who taught him: “If you see something that needs to be done, do it.” Tony has been “seeing it and doing it” ever since, both in Oakland, where he worked on affordable housing and, since 1992, in Portland, where he has managed two programs providing business support to minority contractors. 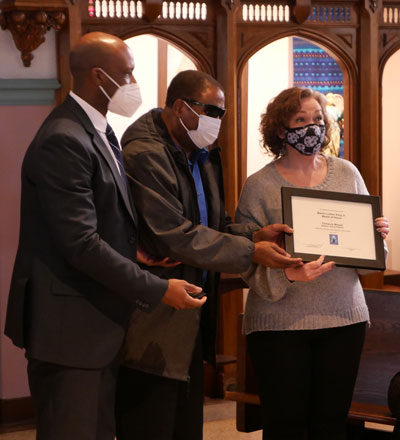 Khalid Maxie and Patrick Elijah present the Community Service award to Michelle Moses, accepting for her husband Terrance Moses. (Photo/Fr. Leo Remington)This year’s award for Community Service went to Terrance Moses, who founded Neighbors Helping Neighbors in 2016 as a modest project to remove trash for the homeless campers living along the Peninsula Crossing Trail and, in less than 7 years, expanded it to servicing camps from St. Johns east to the Cully neighborhood, and from Jantzen Beach south to Alberta Street. On a daily basis, Terrance delivers 15,000-16,000 pounds of trash to the dump, meanwhile distributing sandwiches and toiletries as he makes his camp visits. Because he understands that the most common complaint from housed neighbors is the trash accumulating around the camps, he sees this mission as a diplomatic bridge between the housed and the unhoused. From the beginning, he has asked the campers that they be polite to neighbors, and that they help him load the truck when he arrives to pick up the now-filled bags he left the week before.

In addition, Terrance also does the maintenance work for the Women’s Village in Kenton, a project of Catholic Charities. And he participates in the projects sponsored by Portland Covenant Church, where his family worships. In fact, at the last minute, he remembered he was leading a team cleaning King Elementary School Sunday morning, which was how his congregation honored Dr. King. As his wife Michelle (Lambert) Moses graciously accepted the award on his behalf, she acknowledged, “Terrance really does have a servant’s heart.”

Guest speaker Cameron Whitten reported on the progress and achievements of Brown Hope and the Black Resilience Fund, both of which he founded and runs. In 2021, St. Andrew recognized Cameron with the MLK Community Service Award for this important work.