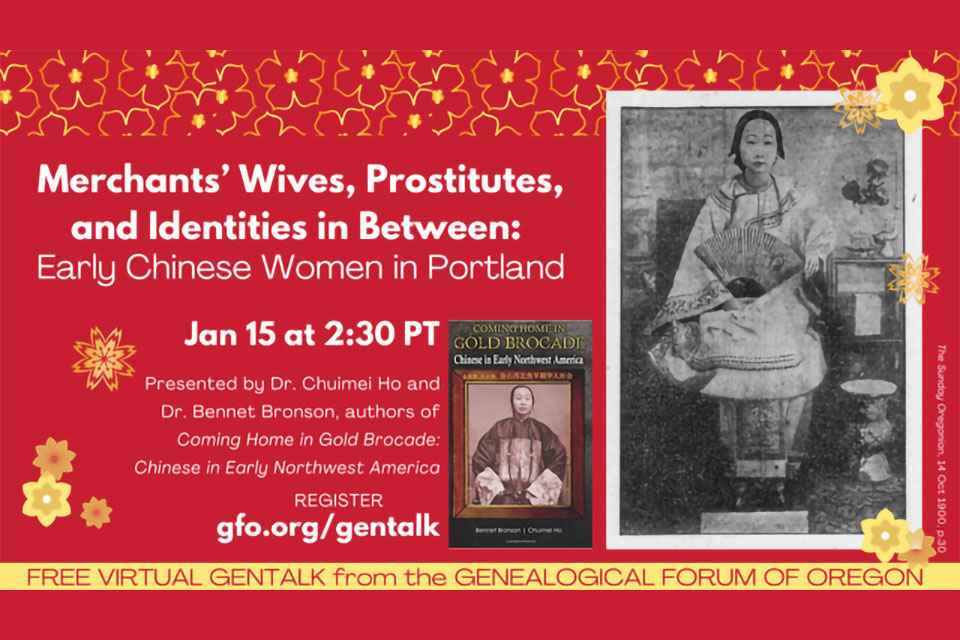 The Genealogical Forum of Oregon, a local genealogical library, is hosting a free talk focused on the lives of the first groups of Chinese women to immigrate to Oregon. This virtual event will occur at 2:30 pm Saturday, January 15; pre-registration is required.

Archaeologists and authors Dr. Chuimei Ho and Dr. Bennet Bronson will present an illustrated lecture at the GFO’s monthly GenTalk on the topic of “Merchants’ Wives, Prostitutes and Identities In Between: Early Chinese Women in Portland.”

Dr. Chuimei Ho was born in Hong Kong and received her Ph.D. in art history and archaeology from the University of London in 1984. She arrived in the U.S. in 1987 and served as adjunct curator at the Field Museum from 1989 to 2006. In 2001 she became a founder and first president of the Chinese American Museum of Chicago, and in 2008 she founded the Chinese in Northwest America Research Committee (CINARC) with Bennet Bronson.

Dr. Bennet Bronson received his Ph.D. from the University of Pennsylvania in 1976. He was Curator of Asian Archaeology and Ethnology at Chicago’s Field Museum from 1971 to 2008, has done archaeological work in Guatemala, Thailand, Indonesia, and Sri Lanka, and has published two books with Chuimei Ho; Splendors of the Forbidden City, Coming Home in Gold Brocade: Chinese in Early Northwest America, and Three Chinese Temples in California.

GenTalks are monthly presentations on a wide variety of topics of genealogical interest currently provided via Zoom and always available to the public for free. If interested, sign up ahead of time at gfo.org/gentalk.

The Genealogical Forum of Oregon

The Genealogical Forum of Oregon is a 501(c)(3) nonprofit organization, located at 2505 S.E. 11th Avenue, Portland. As a secular, all-volunteer organization, we operate the largest genealogical library in the Pacific Northwest. GFO holdings include an expansive collection of resources to assist anyone interested in pursuing their own family’s genealogy, irrespective of the location. Although the physical library is currently closed to the public due to the pandemic, online talks and classes have continued virtually. GFO researchers also respond to the members and the public’s emailed queries about genealogy and history. You can learn more about GFO’s mission, activities, along with our publications and resources at https://gfo.org/.