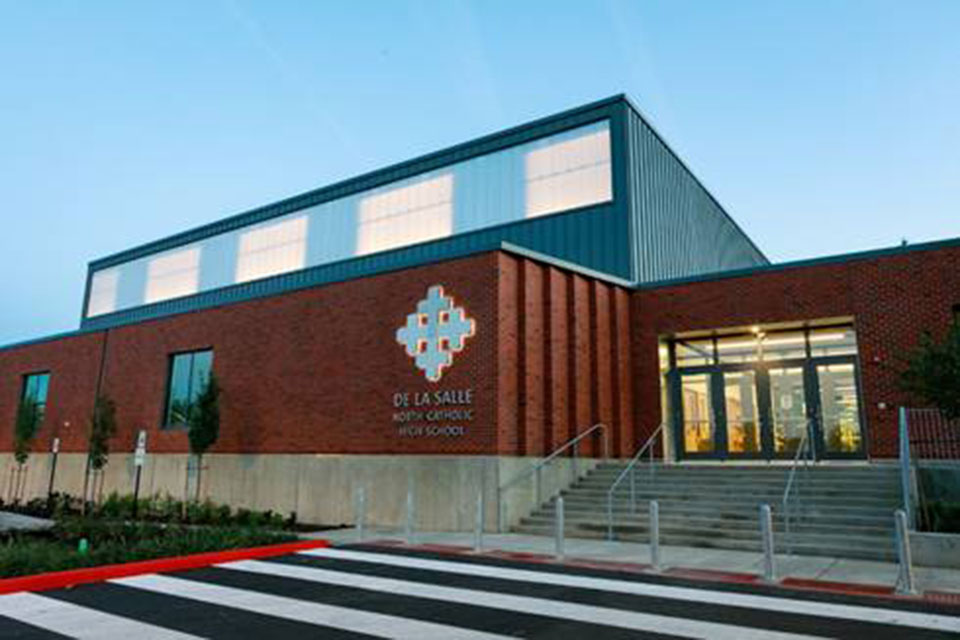 PORTLAND, Ore. - (Oct. 19, 2021) - Today, De La Salle North Catholic High School (DLSNC) completed the renovation and construction of its new campus as construction crews put the final touches on the Michael Kelley Gymnasium. The school completion marks the beginning of a new chapter for the 20-year-old institution known for its unique and transformative education. The school is the first new Catholic high school campus in Portland in more than 50 years.

De La Salle North Catholic High School prepares students for college by providing a rigorous, faith-based education emphasizing math, science and language arts. They offer a private college preparatory education to urban students with limited educational opportunities, turning no one away because of an inability to pay. DLSNC is the most diverse private school in Oregon.

Now located on the southeast corner of NE 42nd Avenue and Killingsworth Street, DLSNC is co-locating with St. Charles Parish, which previously operated a Catholic grade school from 1950 to 1986. Since it opened in 2001, De La Salle North Catholic has rented its two past locations, most recently the Kenton building from Portland Public Schools. The permanent new home provides stability, sustainability and a sense of belonging.

President of DLSNC Oscar Leong said, “We began our search for a new home more than five years ago and it has been a roller coaster as we navigated through the search, the agreement with St. Charles, the design of the new campus, the fundraising for the new school and the global pandemic. This is a glorious day for Knight Nation. So many individuals both inside and outside our community helped make this moment possible. We are well-equipped to meet the needs of DLSNC students and staff, now and into the future. Our school serves as a hub of opportunity for the youth of Portland as well as a place of ministry for St. Charles parishioners. Together, we are building community and inspiring past, current and future students of De La Salle North Catholic.”

Gabriella Quinto Alfaro, a 2016 DLSNC graduate who now works as a business office associate, is one of four alumnae who currently works for the school. Alfaro said, “Being in the new school makes me want to be a freshman all over again! The new school is just so beautiful and exciting.”

The school completed a $26 million capital campaign, led by honorary co-chairs Mary and Tim Boyle, in two phases over 30 months. Phase one included $20.5 million in funding for the renovation of the academic wing, and new construction of the commons, courtyard and parking lot. Phase two raised $5.5 million needed for a gymnasium and additional campus costs. DLSNC launched phase one of the campaign publicly in March 2020, just as the COVID-19 pandemic hit. At that point an additional $2.2 million was needed in order to begin construction. Undeterred by the uncertainty of the pandemic, the school successfully met their Phase one goal and broke ground in July 2020. Two months later, they raised the minimum required to build the gymnasium.

The new campus accommodates more than 350 students, ensuring the school’s strong and transformative education will continue to impact a growing number of students’ lives long into the future. It also includes a private courtyard, new commons, state-of-the-art science labs, a specialized art classroom and a high school competition-sized gym. The science classrooms allow for both technology-based and hands-on labs to provide a greater variety of experiential learning in physics, biology and chemistry.

“We’re especially excited about the Michael Kelley Gymnasium, which provides a new, long-deserved home for our two-time state championship-winning boys’ basketball, girls’ basketball and volleyball teams, as they’ve never had one before,” said Leong.

The schools welcomed 274 students on September 7, 2021, while construction finished on the commons and gymnasium. The official ribbon cutting on the entire new campus is slated for Friday, October 22.

As DLSNC students enjoy the return to in-person classes, they are also returning to offices through the Corporate Work Study Program. The school is working hard to reestablish partnerships interrupted by the pandemic. Any companies interested in partnering with the school are encouraged to contact Lisa Creamer, Director of Corporate Relations, at lcreamer@dlsnc.org.

As part of one of the largest educational networks in the world, Lasallian Education can be found in 80 countries throughout the world. Since 1680, these educational institutions have been influenced by the vision and innovative spirit of Saint John Baptist de La Salle, the founder of the Institute of the Brothers of the Christian Schools and the patron saint of teachers. The five core principles of a Lasallian Education are: concern for the poor and social justice; faith in the presence of God; respect for all persons; quality education; and inclusive community.

The Cristo Rey Network® is the only network of high schools in the country that integrates four years of rigorous college preparatory academics with four years of professional work experience through the Corporate Work Study Program. Composed of 38 Catholic, college- and career-preparatory schools that today serve 12,300 students across 22 states and collectively claim 23,000 graduates, the Cristo Rey Network delivers a powerful and innovative approach to inner-city education that equips students from families of limited economic means with the knowledge, character and skills to transform their lives.