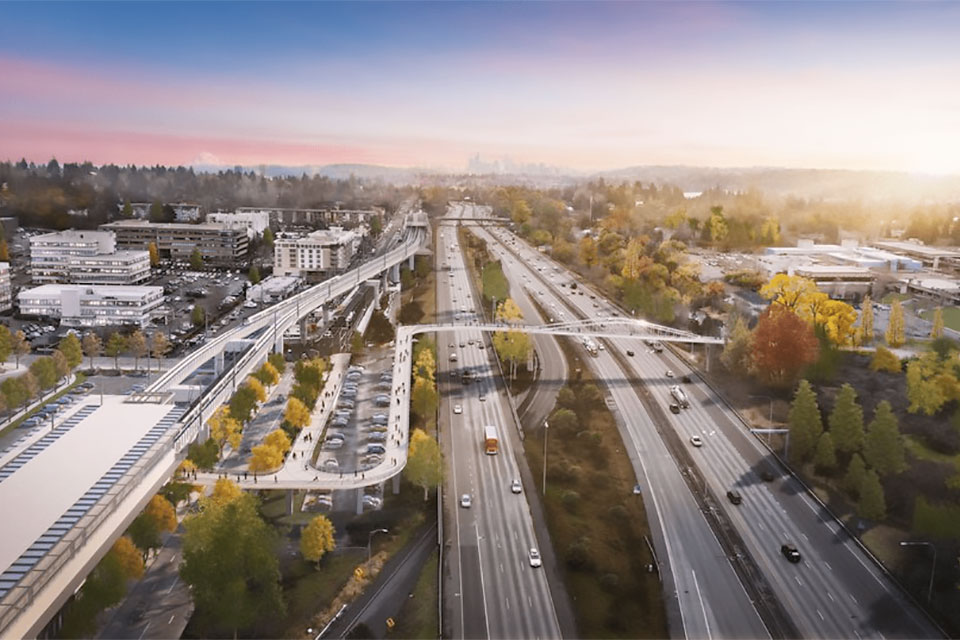 Seattle - On October 2, the Seattle Department of Transportation (SDOT) opens the John Lewis Memorial Bridge (Northgate Pedestrian and Bicycle Bridge) to people who walk, roll, bike and take transit. The bridge improves access to communities, services and opportunities on the east and west sides of Interstate 5 (I-5) in Northgate and Licton Springs, helping knit together a historically divided community. The bridge:

The new bridge spans roughly 1,900 feet long over I-5, landing at North Seattle College on the west side and at 1st Ave. NE and NE 100th St., near the new Northgate Link light rail station, on the east side of bridge construction. When constructing the bridge, SDOT kept safety, the environment and accessibility on top of mind with features and improvements such as:

In addition to the opening of the new John Lewis Memorial Bridge, there are more grand opening events planned for October 2 with Sound Transit opening its three newest Link light rail stations at Northgate, Roosevelt, and the U District.

Councilmember Debora Juarez (District 5) led the efforts in naming the bridge after U.S. Representative John Lewis to increase Black, Indigenous, and People of Color (BIPOC) representation in North Seattle. Across Seattle, BIPOC community members and leaders are underrepresented in the names of significant city infrastructure such as streets, bridges, and community centers.

Representative Lewis led civil rights activists in a march from Selma to Montgomery, Alabama, when they were attacked by state troopers attempting to cross the Edmund Pettus Bridge. The violent attacks were recorded and disseminated throughout the country, and the images proved too powerful to ignore. "Bloody Sunday," as the day was labeled, sped up the passage of the 1965's Voting Rights Act. Once elected, Representative Lewis was known as the “conscience of the congress.”

The opening of the John Lewis Memorial Bridge  is timely as the U.S. Congress considers the John Lewis Voting Rights Advancement Act, and in light of attacks across the nation to limit the ability for some groups of people to express their constitutional right to vote.

The John Lewis Memorial Bridge was made possible by the voter-approved Levy to Move Seattle, Sound Transit, Washington State Department of Transportation, and North Seattle College.