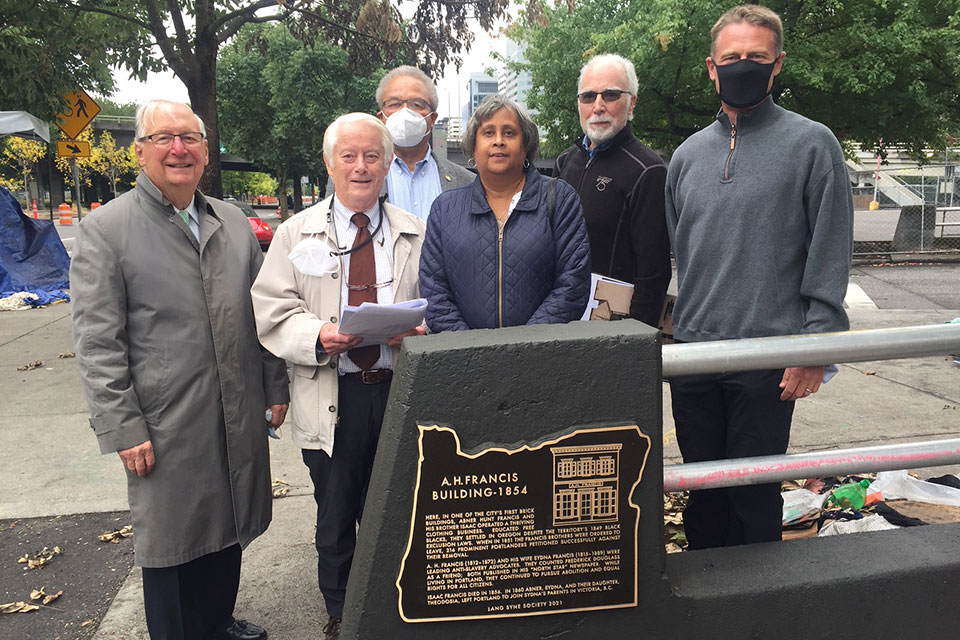 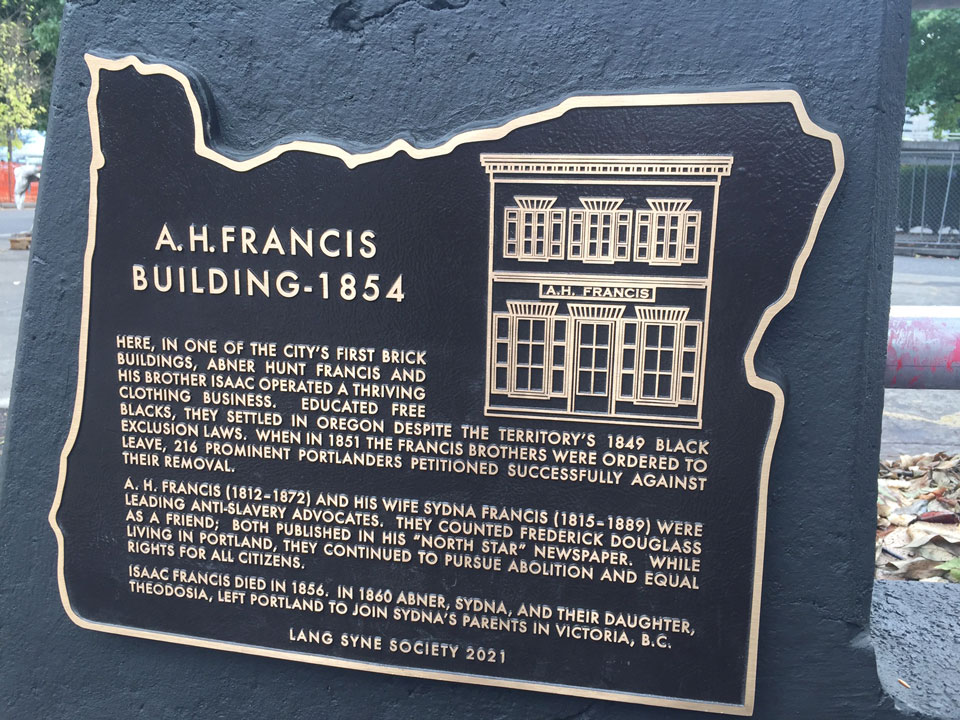 This plaque marks the spot where A. H. Francis' merchantile shop stood in SW Portland. (Photo/Mike Pullen)Abner Hunt Francis moved west in 1851, soon after Portland was incorporated,with his brother, Isaac B. Francis. Although they were threatened with expulsion from the Oregon Territory due to the Black exclusion laws, a petition signed by 216 Portlanders (a large portion of the population at that time) helped to thwart their eviction. Francis and his brother became successful clothing merchants, operating a prosperous store until 1861, when Francis and his wife Synda Francis moved to Victoria, British Columbia. (I .B. Francis had died in California in 1856.)

Throughout the mid-1800s, Francis was an active abolitionist, using his position to fight for Black people from western New York to the Pacific Coast. He wrote letters to his friend Frederick Douglass about the conditions for Black people in Oregon and California, and about his resistance to Oregon’s Black exclusion laws, and Douglass published the letters in his abolitionist newspaper.

Washington, D.C.-based writer Kenneth Hawkins, who wrote about Francis’s relationship with Douglass in the Winter 2020 issue of the Oregon Historical Quarterly in “‘A Proper Attitude of Resistance:’ The Oregon Letters of A.H. Francis to Frederick Douglass, 1851–1860,” spoke at the dedication about Francis’s first-hand documentation of life as a free Black person living in the region. Descendants of the petition signers (including several with family names that can be seen throughout Portland, such as Failing, Couch, Davis, Hoyt, and Corbett) also attended.

Kimberly Stowers Moreland, vice president of OBP and author of Images of America: African Americans of Portland, says “the A.H. Francis Building is one of the most significant contributions of African Americans to early Portland and represents an amazing story of resilience.” Portland architectural historian William J. Hawkins III (no relation to Kenneth) spearheaded the plaque effort and agreed with Moreland, calling the building “an important part of early Portland’s central core.” Multnomah County, which owns and maintains the plaque location on a Morrison Bridge off-ramp, is excited and pleased to participate in its placement.

The Lang Syne Society, a group of retired Portland business leaders, has placed 21 other historical plaques around Portland since 1960. The Oregon-shaped bronze plaques, mostly in Portland parks, celebrate people, places, and events that shaped Portland during the nineteenth century. Secretary-treasurer Ted Kaye, who leads the plaque program, said, “Amidst today’s turmoil, it is important to recall how Portlanders of 170 years ago stood up to racial bias.