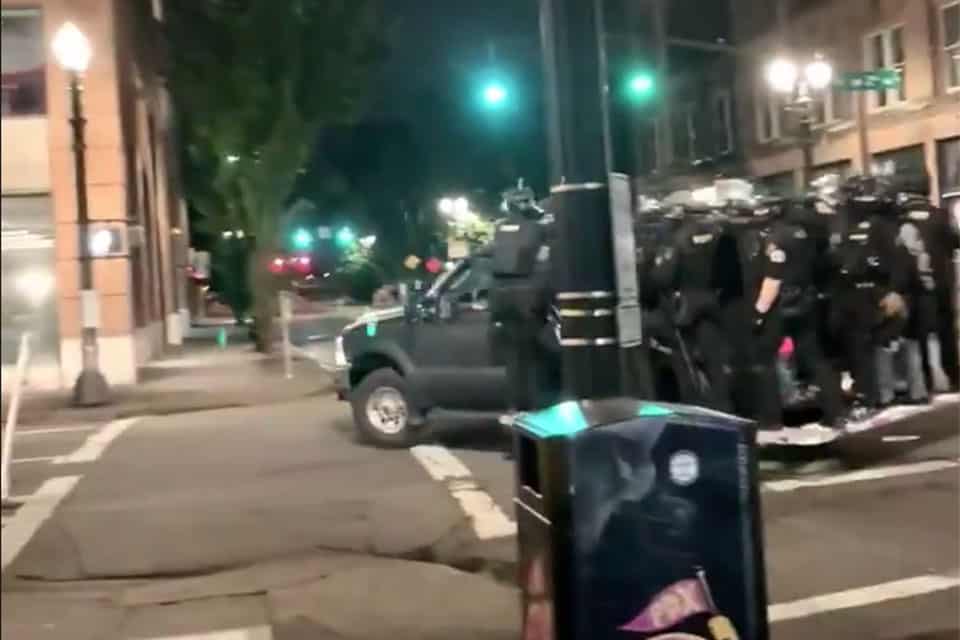 PORTLAND, Ore. (AP) — Two crowds gathered in Portland to mark the anniversary of the murder of George Floyd — one peacefully singing and chanting and carrying signs, while the other gathered downtown, prepared for conflict, police said Wednesday. Five people were ultimately arrested after the downtown crowd lit fires, broke windows and threw objects at officers.

The downtown crowd included people wearing helmets and carrying gas masks, backpacks and tote bags. Some pushed a dumpster against the Multnomah County Justice Center and lit it on fire, while many others held umbrellas up to obscure their actions, and people chanted to burn the building down, the police statement said.

Police declared the gathering unlawful and moved in to create space for firefighters to put out the dumpster fire. People in the crowd responded by throwing frozen water bottles, glass bottles, eggs and metal spikes at officers, while also firing mortar-style fireworks at police, the statement said.

Once the fire was out and firefighters could get safely away, police backed off; then the crowd moved through downtown, breaking windows at City Hall and in some downtown businesses, lighting fires in trash cans and fighting amongst themselves, police said. Officers “made targeted arrests,” naming five people on charges including criminal mischief.

People protested in Portland for more than 100 days last year after Floyd’s May 2020 killing sparked national rallies against racial injustice and police brutality. Other cities around the country also held demonstrations to mark the anniversary.

Fireworks are let off outside the Injustice center in downtown Portland on the anniversary of George Floyd’s murder. There are around 300 people here. #GeorgeFloyd #portlandprotest pic.twitter.com/fCqwmh7jvb