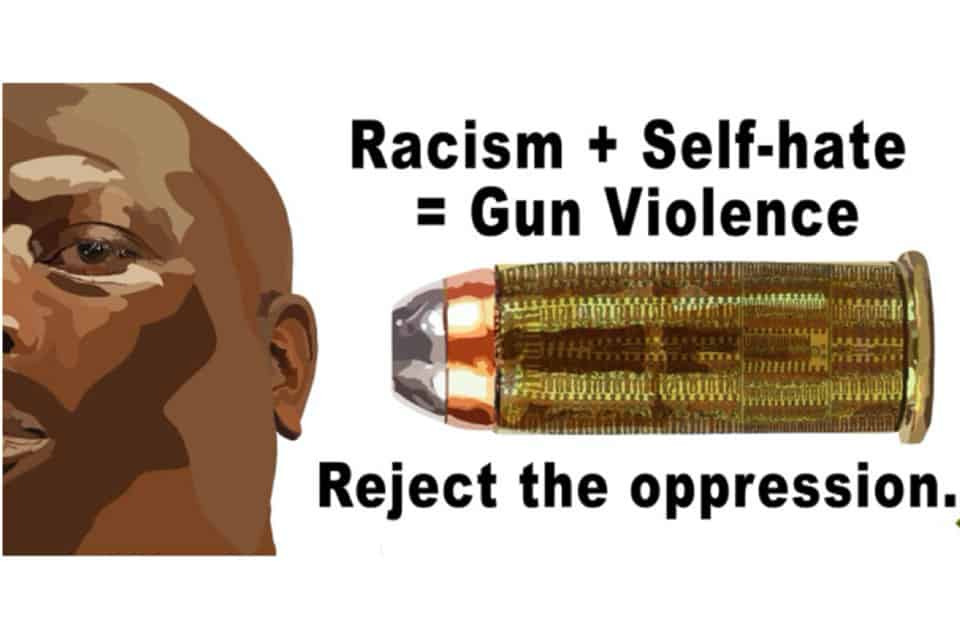 PORTLAND, OR: Portland’s latest spike in hundreds of shootings and homicides across Multnomah County is instigating a heightened local and federal police presence. But it is also facilitating an awareness among community-based organizations to respond to the underlying issues that are feeding into this public health crisis: White supremacy.

A series of provocative billboards that directly connect the issue of Black-on-Black gun violence to the self-hate that is procreated by racism was announced Monday. Although shootings are also occurring among other ethnic groups, neo-Nazis and other white gangs, this billboard messaging is intended to specifically reveal the impact that anti-Black trauma has had on the psyche of Portland’s Black community.

“The Billboard campaign is done out of love and compassion, with the intent to bring awareness, action and solutions to the overwhelming number of shootings that impact communities of color, but more specifically Black men in Portland, Oregon,” said Sam Sachs, founder of The No Hate Zone. Sachs has been raising awareness about gun violence in the Portland area for more than 10 years.

Early draft of billboardsSachs recruited award-winning former Oregonian columnist S. Renee Mitchell to craft the billboards’ messaging. Mitchell, a 2019-20 Spirit of Portland winner, is the visionary for a nationally award-winning, youth-development organization, called I Am M.O.R.E. (Making Ourselves Resilient Everyday). Mitchell had already completed years of research on the effects of racial trauma and defends her doctoral degree from the University of Oregon on Tuesday, May 11, 2021. Her captions read “Racism + Self-hate = Gun Violence” with the taglines “Reject the oppression” or “Do the math.” Another tagline reads: “Destroy white supremacy, not each other.” Imagery of a slave ship superimposed onto a gold bullet was created by visual artist and award-winning filmmaker Elijah Hasan, who has collaborated with Mitchell on several creative projects for her “Spreading Black Joy” campaign.

“It is my intention to remind the Black minds inside these Black bodies that they may think that these bullets fly because someone snitched or even killed a loved one,” said Hasan, a Portland native. “But I am suggesting that this is not the reason you’re shooting. But instead, it’s a symptom of the environment you find yourself in.

"That is the calculated manifestation of an ecosystem promoting self-hate.”

This anti-gun violence billboard campaign is endorsed by multiple organizations, besides the No Hate Zone and I Am M.O.R.E,. including the Portland Rotary Peace Builders Committee, Love is Stronger, and Books Not Bars Oregon.

Lionel Irving, who joined a gang in sixth grade and spent time in prison for gun-related violence, founded his nonprofit, Love is Stronger, to help steer current and potential gang members toward mental health services. His agency also connects Black youth to strength-based programming that will help reduce their chances of returning into the criminal-justice system.

“These are our kids and our responsibility,” Irving said. “But the community accountability is lacking.

"Whatever your lane is, mother, father, uncle, brother, sister, you are obligated to say something to them with some kind words and some love. That’s the bare minimum.”

Mitchell’s years of community-empowerment work since leaving the Oregonian in 2009 has focused on Black joy, healing, and youth development. Last year, her I Am MORE nonprofit kicked off a “Spreading Black Joy” campaign, in partnership with Children’s Community Clinic, and the Oregon Community Foundation’s Oregon Black Student Success Community Network, among others. This intergenerational creative- and arts-based endeavor is intended to increase hope, healing and a sense of belonging within Oregon’s tiny Black population.

“Even with the gun violence issue, we don’t want to just focus upon deficits within our community,” Mitchell said. “We are already indoctrinated with those debilitating messages, all day every day, from our schools, in the media, with our personal experiences within society, and even the racial disparities brought out by COVID-19.

“All of these negative frameworks continue to fertilize already existing, unprocessed trauma, which is then internalized and is also unconsciously and incontrovertibly transferred from generation to generation. So, what I Am MORE is focusing on, instead, is creating a pathway toward healing. It’s what we need most to help endure these unsettling times.”