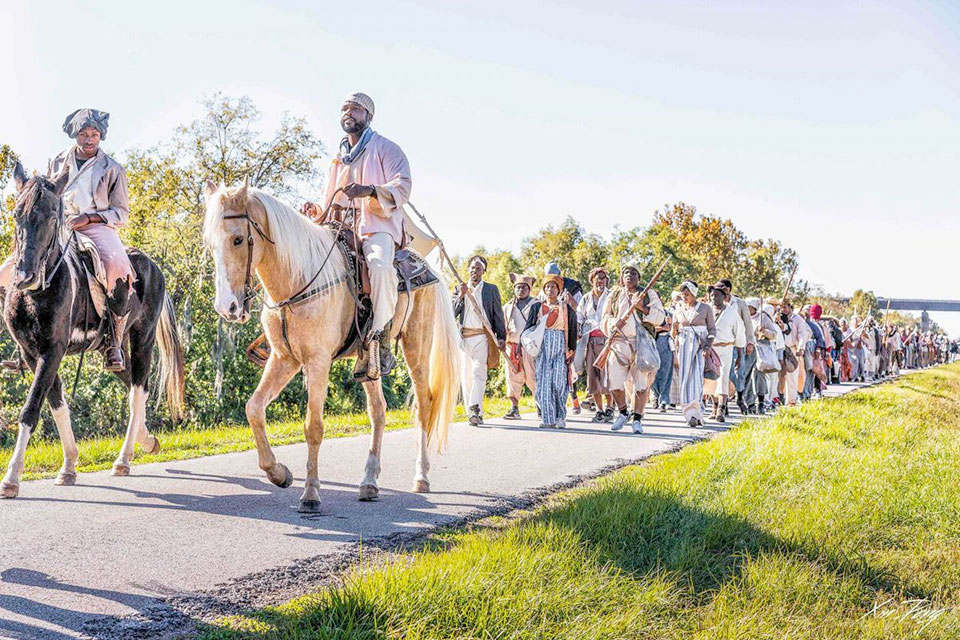 LAPLACE, La. - Today, the Louisiana's River Parishes Tourist Commission (LARPTC) commemorated the 210th anniversary of the 1811 Slave Revolt with the unveiling of a dedicated 10-mile trail at a special press event hosted at Destrehan Plantation, where the trials in the aftermath were held.

The 1811 Slave Revolt Trail recognizes the bravery of those who fought for equality against the ties of slavery and social oppression. The path tells the historical tales of the group that marched toward New Orleans to set up their own free nation and of the others who would join the ranks of the insurgents as they began America’s First Freedom March. Tales of the 1811 revolt group led by Charles Deslondes will be noted at special kiosks depicting the 1811 Slave Revolt Trail, which spans from the 1811 Kid Ory Historic House where the uprising began, to Destrehan Plantation. Click here to view the 1811 Slave Revolt Trail Map for additional information.

"It is imperative to immortalize the contributions of these freedom fighters and to educate all who visit or study this area about their monumental sacrifices to modern society and the development of civil rights," said Buddy Boe, Executive Director of LARPTC. "The Commission looks forward to supporting the efforts of the 1811 Slave Revolt Trail, to foster interest in these local heroes."

On the night of January 8, 1811, up to 500 enslaved people took up arms in one of the largest slave revolts in U.S. history. The insurgents would take advantage of the distractions the Mardi Gras season provided and incite the enslaved to take up arms against their masters and take their shot at freedom. The uprising began on the grounds of a plantation owned by Manuel Andry, now the 1811 Kid Ory Historic House in LaPlace. The revolutionaries marched down River Road, killing two plantation owners and torching several buildings on their way to New Orleans. Other enslaved joined the two-day march along the way. After an initial encounter with the militia near Kenner, the group was forced back to Norco, where a brutal encounter and subsequent trials at Destrehan Plantation took place.

New Orleans native and world-renowned actor Wendell Pierce voices over the trail in a dramatized account of the 1811 Slave Revolt to enhance the visitor experience. Along the route, visitors will learn of the stories of a successful revolt in Haiti and the cruel treatment of the enslaved on Louisiana sugar plantations, which influenced the 1811 events. The path encompasses not only local history but contributes a significant piece of American history, as visitors and residents alike can hear the previously-untold stories of those who marched in that momentous moment.

Nearby extended experiences at Whitney Plantation and Historic Riverlands Church will also help visitors gain insight into these historic events. Additional kiosks will be set-up during Juneteenth to further enhance guest experiences. Visitors will be able to manage their own check-ins and receive exclusive offers from LARPTC partners by accessing the following link to receive an 1811 Slave Revolt Trail pass: https://explore.lariverparishes.com.

“The 1811 Slave Revolt Trail is a testament to the brave men and women who sacrificed their lives in hopes of providing a better life for their children and descendants. Their selfless sacrifice made way for the Emancipation Proclamation and the Civil Rights Act of 1964,” said Pierce. “I invite both locals and visitors to participate in this Trail and learn more about this powerful movement in our nation’s history.”