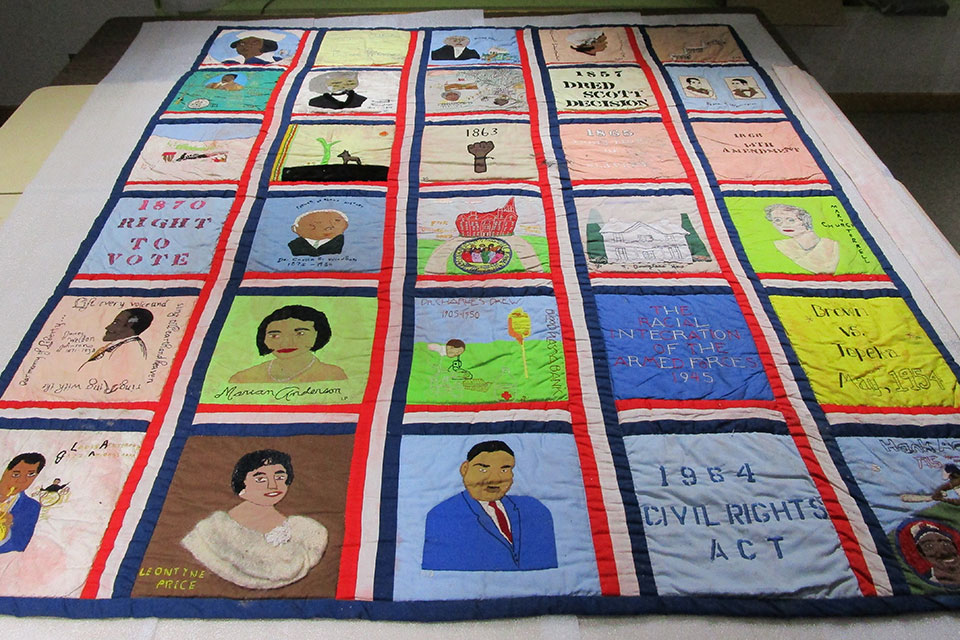 By The Skanner News
Published: 30 November 2020 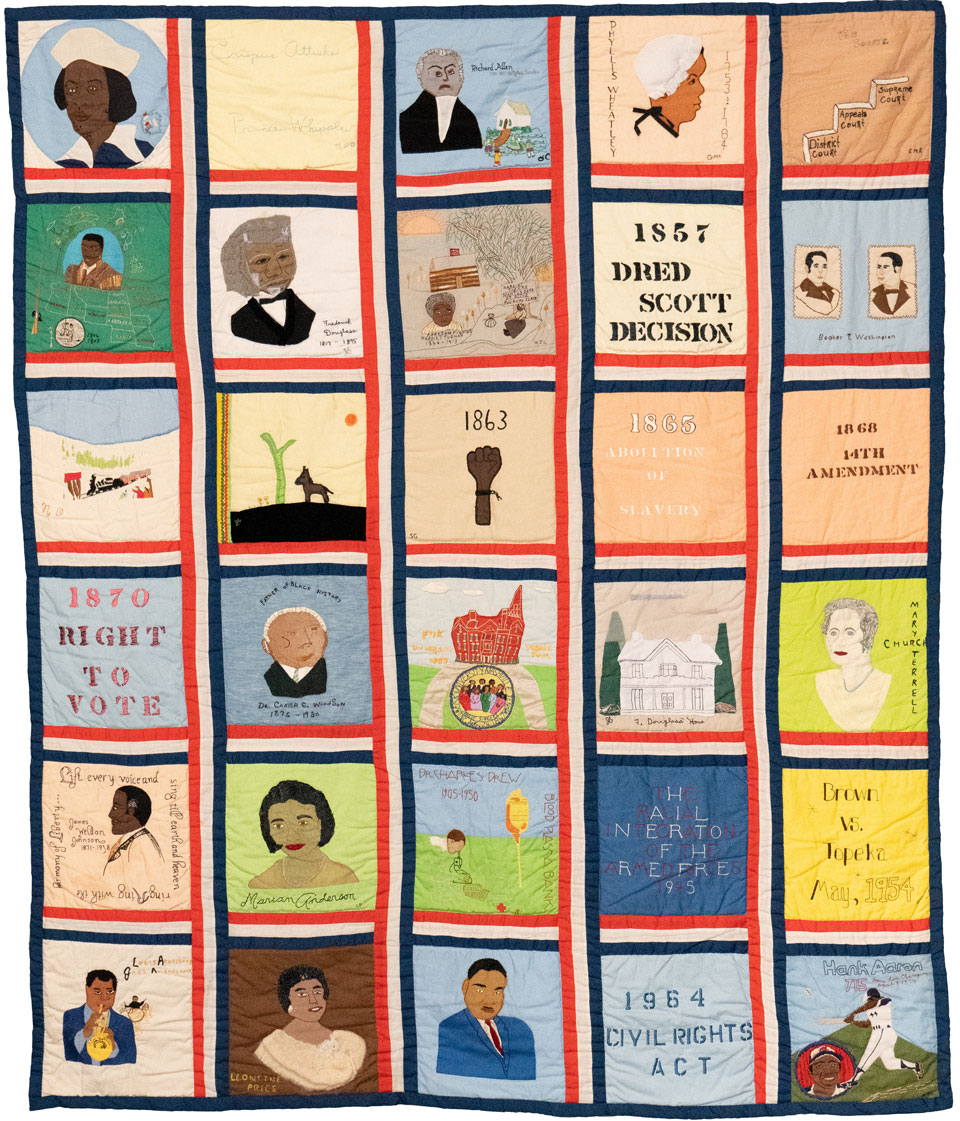 The above image is of the Afro-American Heritage Bicentennial Commemorative Quilt as it was prior to damage sustained after it was taken from the Oregon Historical Society Museum where it was on exhibit in October. Click the image to view larger. (photo courtesy of Portland Textile Month)The Oregon Historical Society has sent the Afro-American Heritage Bicentennial Commemorative Quilt for conservation following the vandalism to the Oregon Historical Society’s (OHS) downtown facility on the evening of Sunday, October 11, 2020. During that evening, the quilt was taken from its temporary display in the OHS pavilion, where it was on exhibit as part of a collaboration with Portland Textile Month in order to offer free public access for community members to view the quilt during the month of October. Local police recovered the quilt early the next morning, returning it to the care of OHS collections staff.

Each square of the quilt, crafted from 1974 to 1976 in honor of the American Bicentennial, honors a Black individual or moment in history. Fifteen Black women from Portland sewed the quilt, who later donated it to OHS and entrusted it to the Society’s care.

Upon its return, museum collections staff quickly moved to stabilize the quilt, carefully but quickly drying it to prevent mold and microbial growth. Once dry, staff members carefully cleaned the quilt with a variable-speed, HEPA filter vacuum through a screen to prevent force or damage to the textile. The quilt did not sustain notable structural damage, but it did suffer from red pigment staining throughout. The quilt was condition reported and documented as is, and staff sent this information to several potential textile conservators. 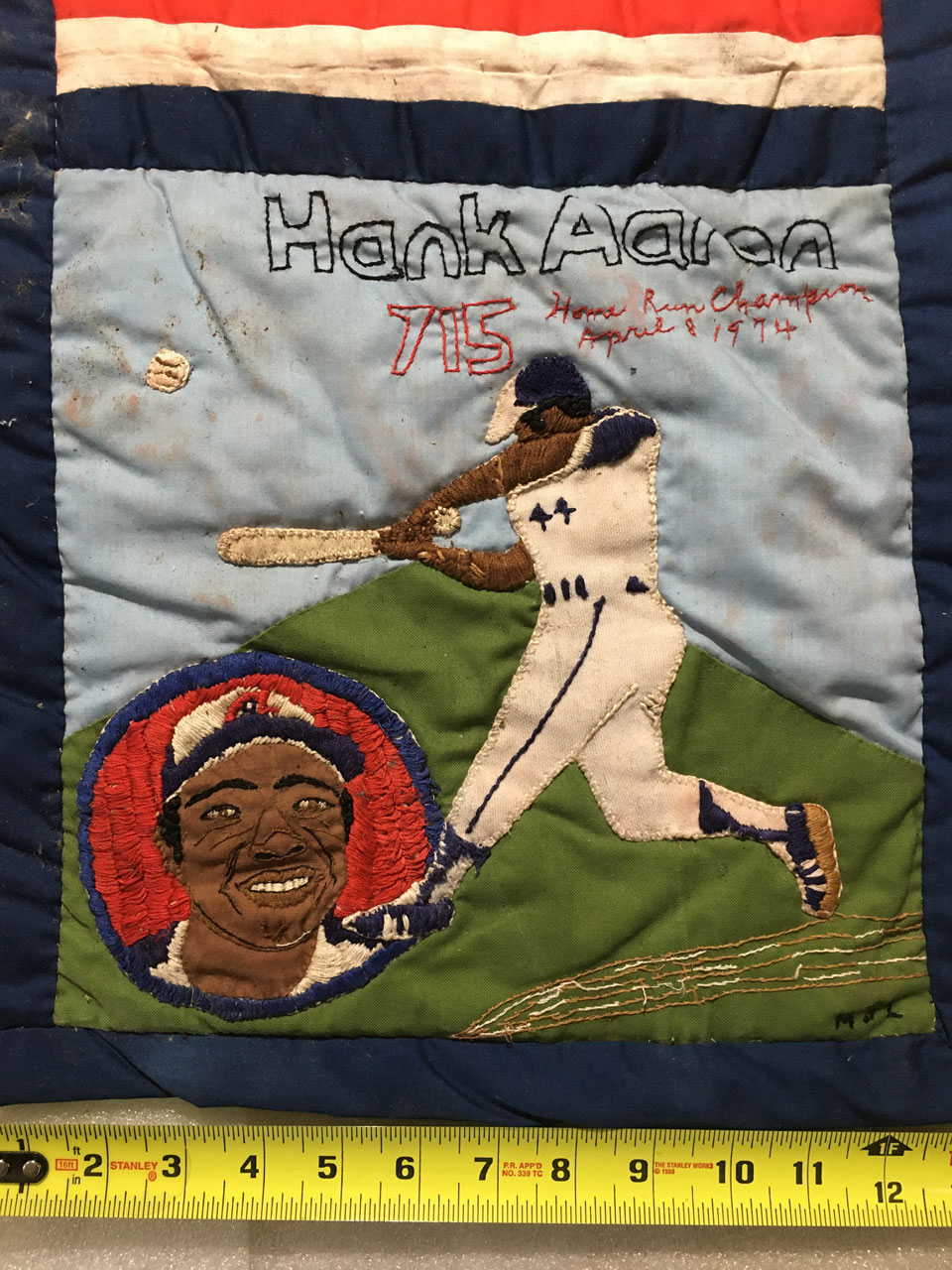 The above photo details damage to the quilt, including dirt and ink bleeding, on the block dedicated to Hank Aaron. Click the image to view larger. (photo courtesy of OHS)Last week, OHS sent the quilt to the Textile Conservation Workshop (TCW), a non-profit organization focused on the preservation of textiles. Located in South Salem, New York, TCW is a highly respected leader in textile conservation with a focus on quilts. The founder and director, Patsy Orlofsky, is also the author of Quilts in America, which provides history and technical information about quilting.

“I am confident that Patsy and her team will do the very best to address the conservation issues with the Afro-American Heritage Bicentennial Commemorative Quilt,” said OHS Deputy Museum Director Nicole Yasuhara. “Speaking to Patsy, I have been impressed with her knowledge, realistic approach, and thoughtful recommendations. We will continue to communicate throughout the process, and hope to have the quilt back in our care in a few months.”

After consulting with Sylvia Gates Carlisle, the last living quilter from the original group of 15 who made and donated the quilt, OHS decided to attempt to restore the front of the quilt as much as possible, but will remove and replace the quilt backing, which is severely stained. The original backing will remain in the OHS collection as its own museum object, with the history of the vandalism captured and added to its story.

Learn more about the women who made the quilt in The Skanner's story: Quilt Tells Story of Forgotten Black Americans.