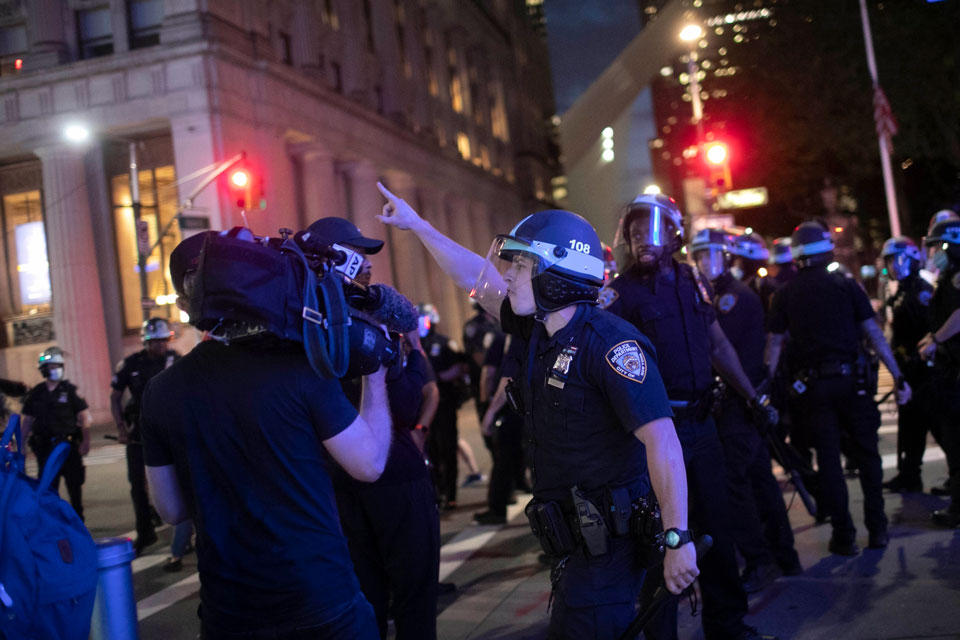 MINNEAPOLIS — The American Civil Liberties Union of Minnesota overnight filed a class-action lawsuit on behalf of journalists who were targeted and attacked by Minneapolis and Minnesota police while covering protests over the killing of George Floyd. The lawsuit was filed against the city of Minneapolis, the Minnesota State Patrol, and the Minneapolis police.

“The power of the people is rooted in the ability of the free press to investigate and report news, especially at a time like this when police have brutally murdered one of our community members,” said ACLU-MN Legal Director Teresa Nelson. “Police are using violence and threats to undermine that power, and we cannot let that happen.

The lawsuit’s lead plaintiff, Jared Goyette, a journalist covering the demonstrations, was shot in the face with a rubber bullet. He repeatedly warned the police that he was a member of the media there to cover the demonstrations.

“Journalists aren’t the only victims,” said Goyette. “Actions like this make protesters, people trying to advocate for change, more vulnerable because journalists provide a witness and police are aware of that.

"Without journalists there, police or other people in power can feel a sense of impunity that no one will see what’s happening anyway.

"Everyone needs to know people are watching.” Attacks by law enforcement against members of the press have escalated in recent days. In Minnesota alone, police have fired rubber bullets at journalists, blinding one in the eye; tear-gassed them; pepper-sprayed them in the face; and thrown flash grenades directly at them. Police have also arrested numerous journalists. Similar attacks have been reported across the country.

“We are facing a full-scale assault on the First Amendment freedom of the press,” said Brian Hauss, staff attorney with the ACLU’ Speech, Privacy, and Technology Project. “We will not let these official abuses go unanswered.

"This is the first of many lawsuits the ACLU intends to file across the country.

"Law enforcement officers who target journalists will be held accountable.”

The lawsuit was filed in U.S. District Court for the District of Minnesota. It seeks an order declaring law enforcement’s actions unconstitutional and prohibiting them from targeting and attacking journalists again. The lawsuit also seeks damages for injuries sustained.

The suit was filed by the ACLU of Minnesota, Fredrikson & Byron P.A. and Apollo Law LLC. The complaint is here: https://www.aclu.org/legal-document/goyette-v-city-minneapolis.