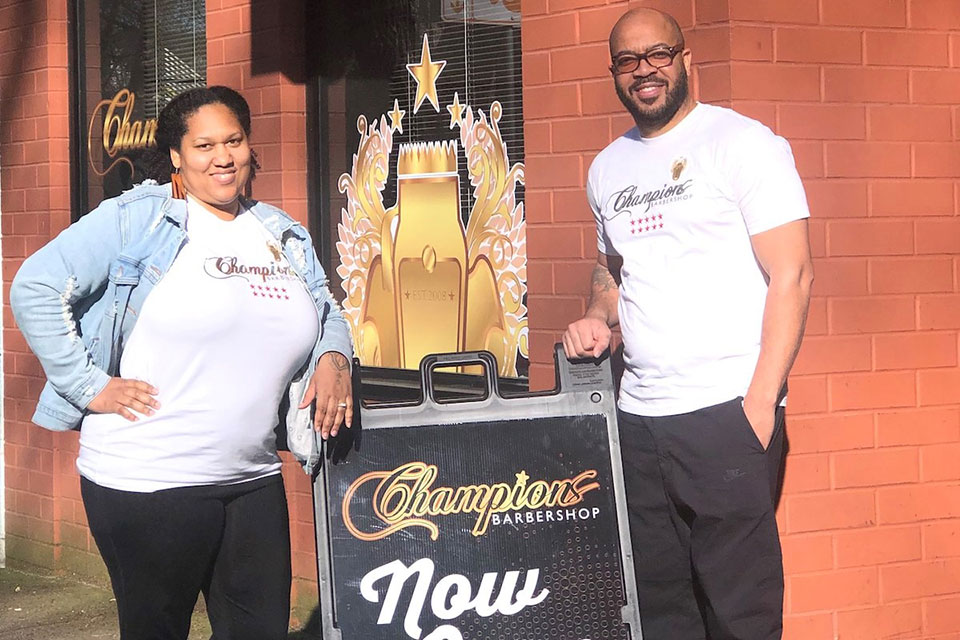 Champions Barbershop, a locally-owned community barbershop in business since 2008, has opened a third location with a storefront at 1430 SW Park Ave. in the South Park Blocks on the Portland State University (PSU) campus. The public is invited to a grand opening celebration on Saturday, March 21 from 12 p.m. to 4 p.m., coinciding with the second round of the NCAA Tournament.

Champions owners Jamaal and Christina Lane will air the game on the shop’s 75” TV screen, with giveaways throughout the day, and a tailgater outside catered by Cason’s Fine Meats. People are encouraged to stop by any Champions location the week of March 15 to pick up and fill out a March Madness bracket; the winner will receive a $500 prize. Please check for event updates due to the coronavirus.

Champions offers artistic barbering service while cultivating community relationships. The Lanes opened their first location in 2008 at 3827 NE MLK Jr. Blvd., and expanded to a second location at 17040 SW Whitley Way in Beaverton in 2012. In 2018, Champions relocated and upgraded its original store to a storefront in Alberta Commons at 5175 NE MLK Jr. Blvd.

The newest shop at PSU opened at the end of January earlier this year. “We’ve always had a lot of PSU students coming to our Northeast shop, and we wanted to give them a more central location,” explained Jamaal Lane. “We feel it’s important to create a relationship with the school and the student body, and we are confident that Champions will double as a community gathering spot for the South Park Blocks neighborhood.

"We are honored to service our newest community of Champions!”

Champions has been home to some of the city’s most talented barbers for more than a decade under the tutelage of Jamaal Lane. Lane graduated from Beau Monde College of Hair Design in 2003 and took a job at Reggie's, one of Portland's most noted old-school barbershops. He worked under barber Reggie Brown for five years, but eventually decided to invest his time and energy into his own vision and passion. In 2016, after noticing that most Oregon cosmetology schools were only glancing over barbering techniques, the Lanes opened the Champions Barbering Institute in NE Portland, where students emerge not just with knowledge of the barbering craft, but also as well-rounded community leaders.