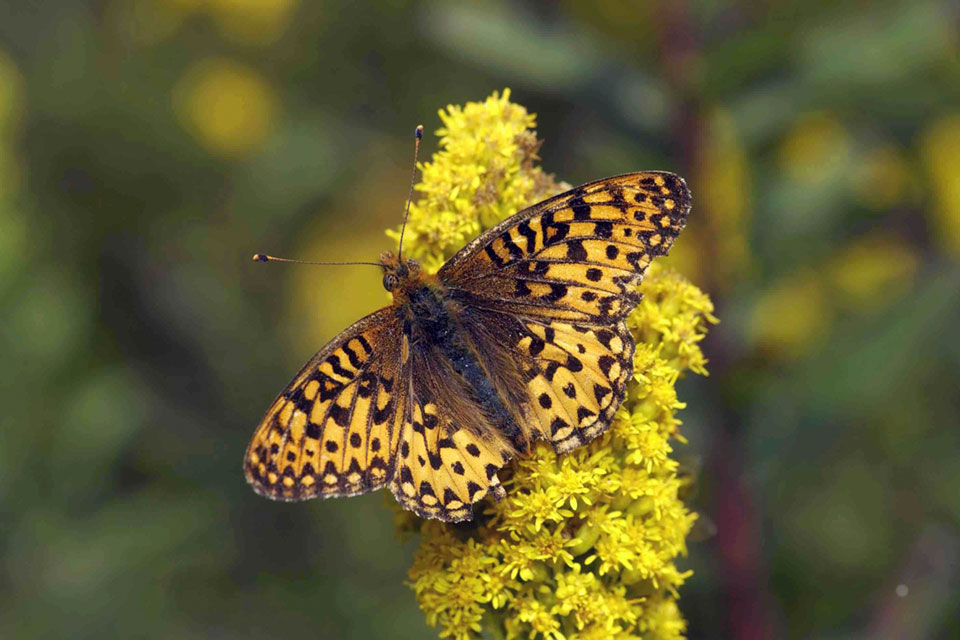 By The Skanner News
Published: 05 December 2019

PORTLAND, Ore. — The Oregon Zoo’s butterfly conservation lab has 269 reasons to celebrate this season. That’s how many Oregon silverspot caterpillars are waiting to become butterflies thanks to the first-ever breeding of this endangered species in a captive-rearing setting. Though wild silverspots lay eggs in the lab each year, this is the first time the butterfly has successfully bred, marking a big step forward in butterfly conservation in Oregon and beyond.

“This is a really exciting breakthrough,” said Tia Perry, a keeper in the butterfly conservation lab.

“Not only does it mean we can release more silverspots in Oregon but it’s something that can benefit the imperiled population in California as well.”

At the request of U.S. Fish and Wildlife Service, Perry and her colleagues held back 22 pupae from this year’s butterfly release, in the hopes they would successfully breed in the lab. Nearly all the butterflies that emerged were female, but a wild male successfully mated with one of them, resulting in 269 tiny caterpillars.

“Though only one female laid eggs in the lab this season, this single success is still very heartening,” Perry said.

“With an endangered species like the Oregon silverspot, every egg counts.”

Listed as threatened under the federal Endangered Species Act, the Oregon silverspot was once common in coastal grasslands from Northern California up into British Columbia. Today, due to habitat loss and the disappearance of its host plant, just five isolated populations remain: four in Oregon and one in California.

“If it weren’t for this recovery effort, it’s likely that three of the remaining silverspot populations would now be extinct,” said Travis Koons, who oversees the Oregon Zoo’s butterfly conservation lab.

The Oregon Zoo is a charter member of the Association of Zoos and Aquariums’ Butterfly Conservation Initiative, a collaborative effort among nearly 50 zoos and aquariums. The zoo is currently working to save endangered California condors, Oregon silverspot and Taylor’s checkerspot butterflies, western pond turtles and northern leopard frogs. Other projects focused on saving animals from extinction include studies on polar bears, orangutans and cheetahs. To learn more about the Oregon Zoo’s effort to save Oregon silverspots and other imperiled Northwest species, visit oregonzoo.org/recovery.

The zoo opens at 9:30 a.m. daily and is located five minutes from downtown Portland, just off Highway 26. The zoo is also accessible by MAX light rail line. Visitors who travel to the zoo via MAX receive $1.50 off regular zoo admission. Call TriMet Customer Service, 503-238-RIDE (7433), or visit trimet.org for fare and route information.