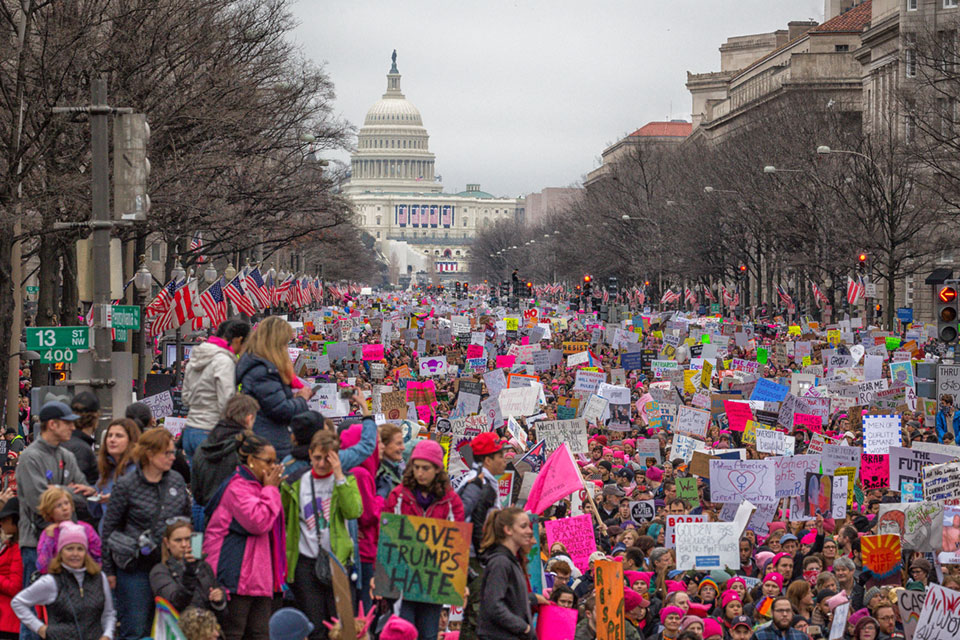 In an extraordinary victory for the people, the Trump Administration has just announced that it is completely backing down from its massive anti-democratic plan to block free speech and assembly through proposed regulations that would have crushed protests on federal land in the nation's capital.

As the Partnership for Civil Justice Fund (PCJF) was preparing to meet the Trump Administration head-on in court to challenge the regulations as unconstitutional, the National Park Service announced yesterday that they could not surmount the public and legal opposition they faced and will not move forward with their plans. The PCJF used the comment process to build the administrative record on which the case would be litigated, including submitting substantive legal challenges and affidavits into the record and organizing opposition that ultimately resulted in more than 140,000 comments being submitted — a record that the administration was not able to overcome.

"Faced with a far-reaching constitutional rights lawsuit and a groundswell of grassroots opposition to the proposed NPS regulations, the Trump White House has abandoned its dangerous efforts to eviscerate mass protest in the nation's capital," stated Mara Verheyden-Hilliard, a constitutional rights lawyer and executive director of the Partnership for Civil Justice Fund.

"The Trump administration's outrageous plan was met with the very force they were trying to suppress — the power of the people.

"Today is a huge victory in defense of the Constitution and cherished freedoms," Verheyden-Hilliard stated.

The proposed regulations would have criminalized and restricted fundamental First Amendment rights. Trump's plan would have made people pay for the right to protest. They planned to charge people for the right to demonstrate on our public spaces including costs and fees so high that no grassroots group could ever afford to do so. They planned to shut down the iconic White House sidewalk to protest, making it off-limits. They planned to enact new restrictions and waiting periods for permit applications that would make it impossible to organize a demonstration, including eliminating the 24-hour "deemed granted" rule. They planned to ban any sustained vigil or protest forcing evictions at 30 days.

The Partnership for Civil Justice Fund first exposed Trump's new plan with a line-by-line legal analysis of his proposed rules and sounded the alarm, including through an OpEd in the Washington Post, “The Trump Administration Wants to Tax Protests. What Happened to Free Speech?” Then they organized and launched a national outreach campaign contributing to an astounding response from the public — more than 140,000 comments were submitted into the formal rule-making record showing a fierce national opposition. The write-in campaign was one part of a legal and educational effort in opposition to the administration's effort to substantially roll back free speech rights. In addition to filing substantive legal comment in opposition, the PCJF prepared for litigation to immediately seek an injunction and stop the rules from taking effect.

As a candidate, President Trump said he'd like to punch protesters and have them carried out on stretchers, and he regularly encouraged violence at his rallies. As President, he has continued his assault on the First Amendment attacking NFL players who peacefully protest for civil rights, called the media "enemy of the people," and said, "I think it's embarrassing for the country to allow protesters." Acting on that hostility towards free speech and dissent his administration sought to block protesters from public forums in the nation's capital.

The regulations proposed by the Trump administration would have:

These changes would have affected all park land under the National Park Service (NPS) in the nation's capital including the National Mall, Lafayette Park, the White House Sidewalk, Lincoln Memorial, the Ellipse, Freedom Plaza and the sidewalks and parkland along Pennsylvania Avenue — including the sidewalk in front of the Trump Hotel.

Read the formal comment on behalf of impacted organizations submitted by the PCJF here.