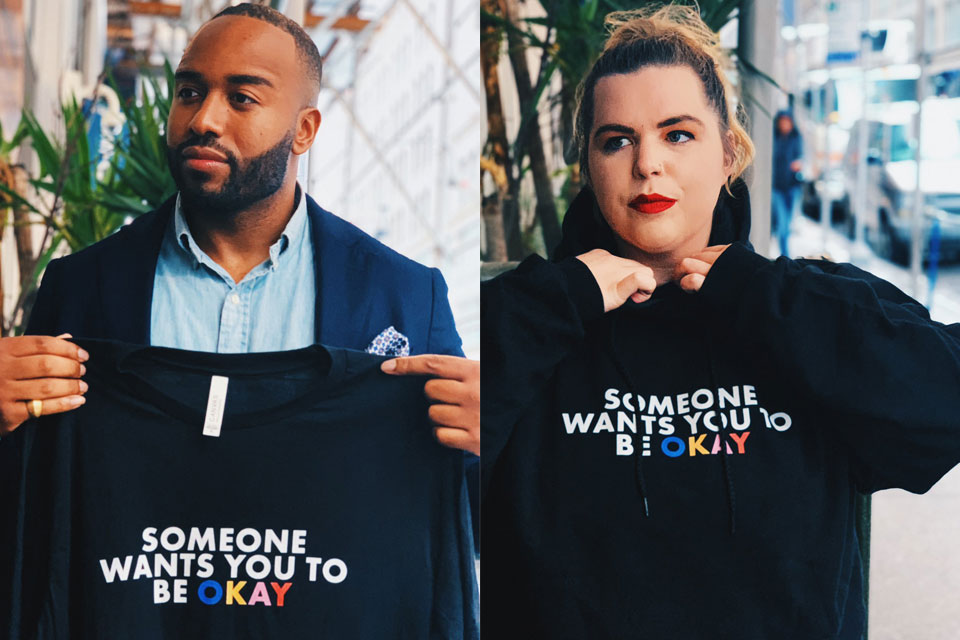 New York, New York | October 8, 2019 — After raising over a million dollars to send 100,000+  children to see the films “Black Panther” and “Captain Marvel”, Frederick Joseph has partnered with Creative Director, Keri Goff to launch Someone Wants You To Be Okay for Mental Health Awareness Week.

The campaign focuses on destigmatizing conversations through its merchandise that displays the simple message “Someone Wants You To Be Okay”.

“The goal of the campaign is simple. We want people around the world to know that they aren’t alone. By purchasing this merchandise, you’re helping destigmatize conversations about mental and emotional health and making the statement that regardless of what you’re going through, we see you.” Joseph said.

Net proceeds from every item purchased will be donated to Crisis Text Line, which is a non-profit organization that provides free, 24/7 support for those in crisis.

An effort to support mental health:

Throughout my life I’ve battled depression. Which has opened my eyes to how stigmatized #mentalhealth conversations are, and how many of us need someone. pic.twitter.com/FtuNXFzhuj

To learn more about the campaign, visit: www.youwillbeokay.org

About Frederick Joseph: He is the Founder and Chief Marketing Officer of the marketing agency We Have Stories, a company focused on supporting marginalized storytellers. He has been active in protests in New York City and on social media outlets such as Twitter and Instagram. Frederick gained recognition for creating the marketing campaign “The Black Panther Challenge”, the largest GoFundMe campaign in history, which raised over $950K and allowed more than 75,000 children worldwide to see 'Black Panther’ for free. Frederick also created the campaigns #CaptainMarvelChallenge, the "Caucasian Shirt Experiment", and “To Black Women With Love”.

About Keri Goff: An award-winning photojournalist/graphic designer-turned-creative director for social good. She is responsible for managing the video, design, and photography for over 300 campaigns and the cause-related marketing for Fortune 500 companies. She combines her passion for visual storytelling and social change by creating campaigns that get young people to take action in their communities around causes they care about.