AFSCME’s Saunders: ‘Anniversary of Dr. King's Death is a Call to Action on Civil Rights’ 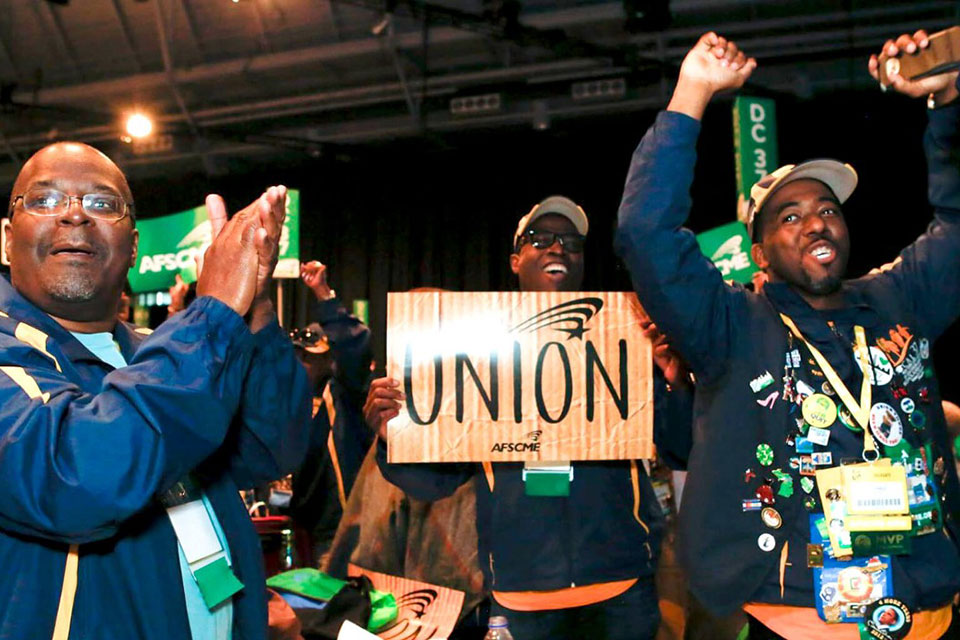 (Washington, D.C.) – One year after leading thousands of labor and civil rights advocates to Memphis, Tennessee, as part of the I AM 2018 initiative, AFSCME President Lee Saunders issued the following statement on the 51st anniversary of the assassination of Dr. Martin Luther King Jr., who was shot and killed in Memphis where he was helping 1,300 AFSCME Local 1733 sanitation workers strike under the iconic slogan “I AM A MAN”: “The anniversary of

Dr. Martin Luther King’s death is a call for action and a potent reminder that workers’ rights and civil rights are inextricably linked. Dignity, fair wages and a voice on the job. AFSCME will continue the I AM initiative to fight for dignity for all workers, a voice on the job and an end to discrimination. Dr. King’s values are AFSCME’s values.”

By Lee Saunders, President of the American Federation of State, County and Municipal Employees

The piece is available below and in full here.

When I was growing up in Cleveland, Ohio, in the 1950s and 1960s, there were three principal ways for African-Americans to make the climb into the middle class.

One was working in the industrial manufacturing mills that were the economic lifeblood of so many midwestern communities. The second was the United States Postal Service, traditionally one of the nation’s most reliable employers of African-Americans.

And the third was working in public transit. That was the path for my family. My father was a city bus driver; and while we certainly never got rich, his job gave us security and stability, allowing my brother and me to have more options than our parents had enjoyed.

Those three career paths had one common element — they almost always came with membership in a labor union (two of them in a public-sector union like the one I now serve as president: the American Federation of State, County and Municipal Employees, or AFSCME). The union provided a voice on the job and a seat at the table. By building power in numbers, African-American workers were able to negotiate for a fair return on our work — for fair wages, decent benefits and a pension that would allow us to retire with dignity.

At a time in our history when so many doors of opportunity were slammed in the faces of African-Americans, labor unions — and public-sector unions, in particular — offered a beacon of hope. This is no small thing in a nation that was literally built on the exploitation of black labor. To gain a better understanding of black history, as we strive to do each February, we must recognize the powerful role unions have played in improving millions of African-American lives.

At the same time, we need to examine the dark underbelly, remembering that the most brutal forms of racial oppression were directly linked to crackdowns on workers’ rights. So-called “right-to-work” laws, which undermine the freedom of working people to stand together in a strong union, have sinister origins in the Jim Crow South. Right to work’s most influential advocate was a Texas oil lobbyist named Vance Muse, an unapologetic white supremacist and Ku Klux Klan supporter. His rabid opposition to unions was rooted in his fear of workers building solidarity across racial lines.

This 1944 anti-union statement from Muse’s Christian American Association leaves little to the imagination: “From now on, white women and white men will be forced into organizations with black African apes whom they will have to call ‘brother’ or lose their jobs.”

Notwithstanding this vile racism, African-American working people continued to organize in unions, allowing families like mine to raise their living standards and capture a piece of the American Dream. Unions became a driving force in the civil rights movement. Dr. Martin Luther King, Jr.’s public support for striking AFSCME sanitation workers in Memphis, Tennessee cost him his life in April 1968.

To be sure, the labor movement itself has not had a flawless record on race over the years. And there is still plenty of work to do on that front. But to this day, union membership closes racial wage gaps and levels the playing field. According to the Bureau of Labor Statistics, African-American union members enjoy median earnings 22.7 percent higher than African-Americans in non-union jobs. Indeed, union membership allows African-Americans to approach (although not quite reach) the pay rate of non-union white workers — highlighting both how important unions are and how deeply structural racism is baked into the system.

Right-to-work momentum stalled in the second half of the 20th century. But the attacks on unions, while not quite as ugly and shameless as Vance Muse’s, never abated. The Koch brothers and other billionaires have taken up the cause, and last year they succeeded (in a case called Janus v. AFSCME Council 31) in getting the Supreme Court to overturn decades of precedent and make the public sector nationwide right to work.

This is a direct threat to the livelihoods of teachers and other school employees, EMTs and first responders, many social workers and sanitation workers — public service occupations that have sustained the black community for generations.

Despite the threat, public sector unions have proven resilient in the wake of Janus. AFSCME has added seven new members for every one who has dropped their membership. But the attacks will continue, from wealthy special interests who want to rig the economy in their own favor.

As we fend off those attacks, we at AFSCME will never lose sight of the connection between racial justice and economic justice. As we continue the struggle, we will lean on one of the enduring lessons of black history: a thriving African-American community, with economic security and upward mobility, depends on strong unions.