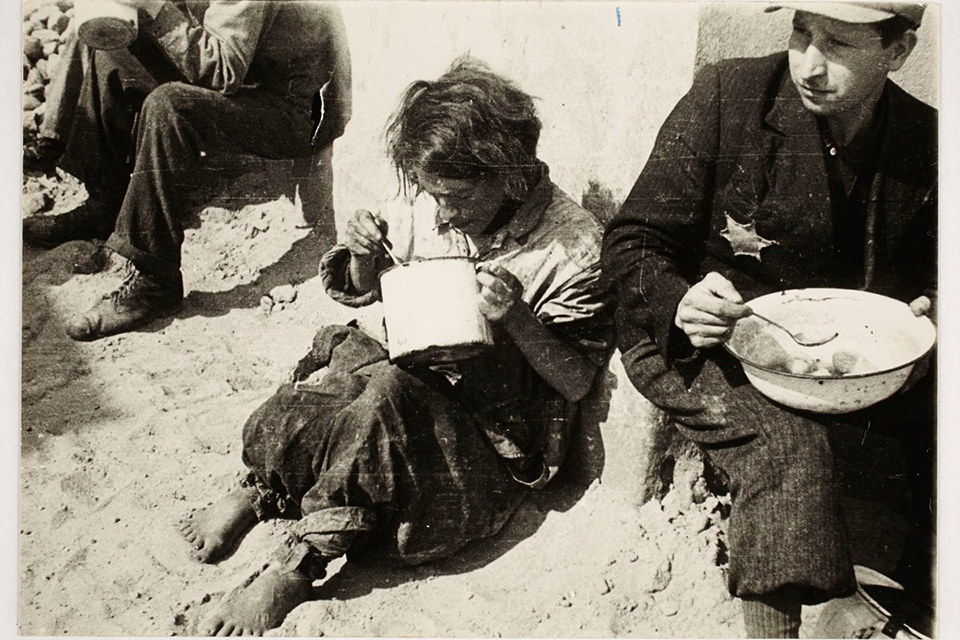 This fall, in partnership for the first time, the Portland Art Museum (PAM) and Oregon Jewish Museum and Center for Holocaust Education (OJMCHE) present "Memory Unearthed: The Lodz Ghetto Photographs of Henryk Ross" (October 27, 2018, through February 24, 2019, at PAM) and the "The Last Journey of the Jews of Lodz" (October 9, 2018, through February 24, 2019, at OJMCHE). Together these exhibitions offer an extraordinarily rare glimpse of life inside the Lodz Ghetto through the lens of Polish Jewish photojournalist Henryk Ross (1910–1991).

Situated in the heart of Poland, the city of Lodz was occupied by German forces in 1939. The Nazis consolidated the area’s Jewish population—more than 160,000 people—into a poor industrial section of the city, sealing it off from the outside world and making the Lodz Ghetto second in population only to the Warsaw Ghetto in German-occupied Europe. More than 200,000 people were forcibly relocated and moved through the ghetto during its four years of operation; a quarter of its inhabitants died of starvation and disease, while most were deported to concentration and death camps. Upon liberation by the Red Army in 1945, only 877 Jews remained alive in Lodz Ghetto.

Henryk Ross, confined to the ghetto in 1940, was forced to serve as a bureaucratic photographer, making official photographs for Jewish identification cards and images used as propaganda promoting the ghetto’s efficiency. At great risk, Ross also documented the brutal realities of life under Nazi rule, culminating in the deportation of tens of thousands to death camps at Chelmno and Auschwitz. Hoping to preserve a historical record, Ross buried more than 6,000 of his negatives in 1944. Returning for them after Lodz’s liberation, he found that more than half of them survived, and spent the rest of his life sharing the images. Nearly 250 of these surviving images are included in Memory Unearthed, a visual and emotional meditation on a harrowing moment in history and pointing to the power of the photograph.

The companion exhibition, on view at OJMCHE, explores Ross’s work in creating "The Last Journey of the Jews of Lodz," published 1961-62 by S. Kibel Publishing, Tel-Aviv, a multi-language book about life in the ghetto illustrated with his photographs.

The exhibition features modern prints from Ross’s original negatives that juxtapose his official work for the Ghetto’s Administrations Statistics Department with the clandestine images he shot of the real life of the ghetto and also includes archival documents from the period in the Lodz Ghetto.

The publication of "The Last Journey of the Jews of Lodz" came shortly after Ross was called to give testimony at the trial of the Holocaust mastermind, Adolf Eichmann, where Ross’s photographs of inflicted cruelties were presented as evidence. After giving testimony, Ross sought to distribute his Lodz Ghetto documentation more widely with his decision to design and produce the book.

Together, PAM and OJMCHE serve as the first West Coast venues for this critical body of work, and both will offer a full slate of exhibition-related programming through the run of the exhibitions.