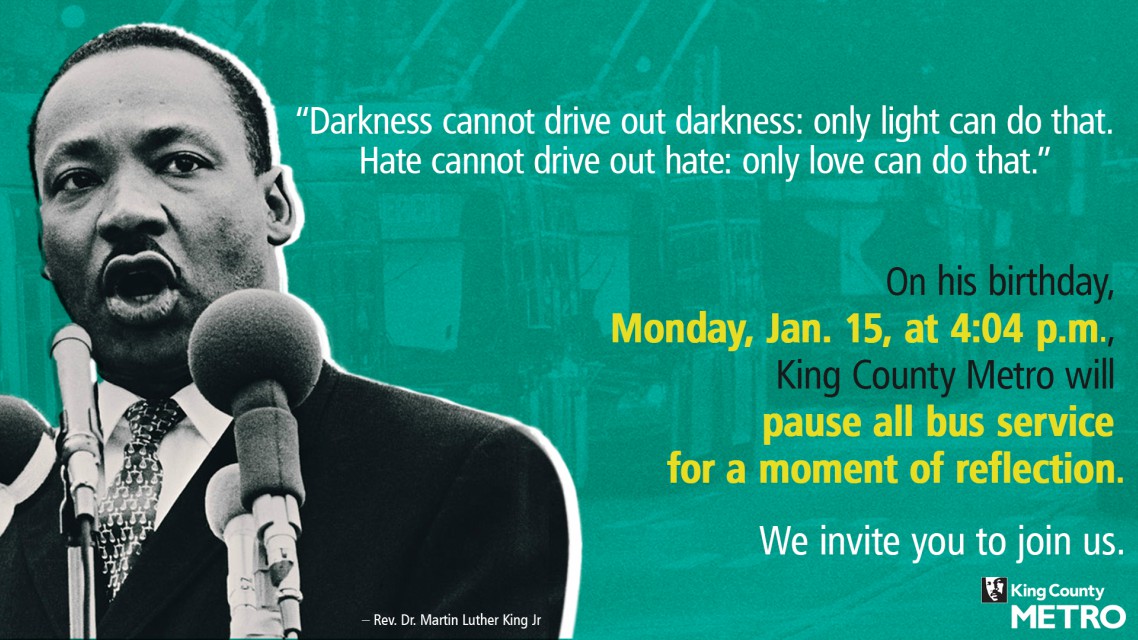 King County Metro will briefly pause all bus service at 4:04 p.m. Monday, Jan. 15, for a moment of reflection and remembrance to honor the birthday of Rev. Dr. Martin Luther King Jr. and to mark the 50th anniversary of his assassination.

Approximately 975 Metro-operated Sound Transit buses will pull over and stop for a brief moment of reflection in honor of Rev. Dr. Martin Luther King, Jr. Buses will not pause service if they are traveling on highways, in the Downtown Seattle Transit Tunnel or on roadways where there is no place to safely pull over. Metro will notify riders via transit alerts and on-board announcements in the days leading up to the moment of reflection, and transit service will quickly restart at the conclusion of the moment of remembrance.

Metro will operate reduced weekday service on Monday, Jan. 15, and some commuter and school-oriented trips will not operate, including reduced service to the University of Washington due to canceled classes. See details online and in printed timetables. Metro offices, including the Customer Information phone line at 206-553-3000 and Lost and Found and Pass Sales counters, will be closed Jan. 15 and will reopen Tuesday, Jan. 16.

King County was named in 1852 after Vice President William Rufus de Vane King, a slave owner and advocate for the Fugitive Slave Act. A 20-year effort to rename the county led to the 2005 change in honor of Rev. Dr. Martin Luther King Jr., followed by a logo change in 2007.

More information about Monday's events can be found online at MLK Seattle.