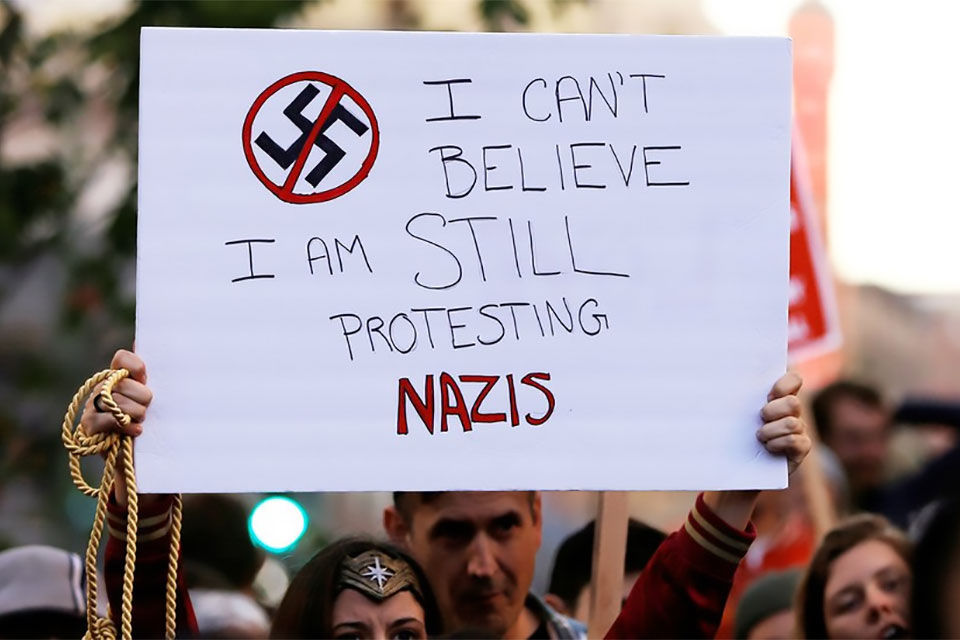 On November 10th, activists of the absurd in Charleston, SC will be taking a page from Germany’s play book when Steve Bannon speaks at the Citadel Republican Society’s Patriot Dinner. Protest organizers are inviting people to contribute to the Charleston Parks the Hate Park-a-Thon.

“Irony, absurdity, and humor are often the best resources to change a narrative for the better,” says Fabian Wichmann, the idea man behind the brilliant campaign that pranked neo-Nazis by turning their own march into an involuntary anti-nazi Walk-a-thon.

Park-a-Thon donors pledge and encourage others to pledge funds based on the total number of cars coming to see Bannon speak, which will be counted at the event. There is also an option to pledge a flat amount. Pledged funds will go to hateXchange, the official US-counterpart of the Wichmann’s German organization, Hass Hilft. hateXchange will redistribute the donations to Human Rights Watch, Life After Hate, and local charities in Charleston through their #DonatetheHate program.

A highly visual story, the event will feature balloons, silly banners, bad puns, and happy fundraisers cheering on attendees and their support for a divisive political climate. This form of protest offers a response that avoids violent conflicts like the tragedy of Charlottesville.

At 6:15PM, when Bannon takes the stage, Dr Stuart Pimm of Duke University will lead a prestigious team of satirical scientists to finalize the estimate of cars based on aerial images of the parking lot and data from people counting cars on the ground. Results will be announced live via twitter #donatethehatedonatethehate.

While the event will be light-hearted, there is nothing funny about Charleston’s fraught racial history, which reaches back over centuries and carries through the present day. Two years ago an extremist murdered nine people at prayer at Mother Emanuel AME Church; two weeks ago, local white college students dressed up as unarmed black men who died in police custody “as a joke.”
Rev. Dr. Jeremy Rutledge, Senior Pastor at Charleston’s Circular Congregational Church, is on the local steering committee. “We are drawing on the example of people who are turning to creative forms of protest. We want to take the negative energy visitors might bring and channel it into constructive work for the common good,” says Rutledge. “Put another way, we want to turn hate into love.”

More information and to add your pledge, go to the Park the Hate website.