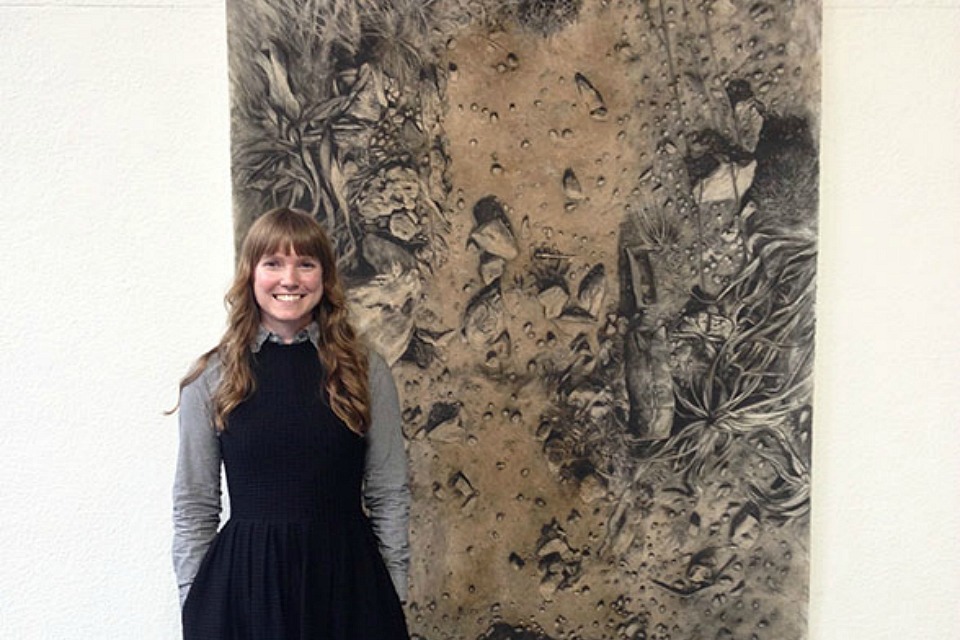 Portland State student Megan Hanley, who graduates this month with an MFA in Art Practices, has been awarded the $10,000 Andries Deinum Prize for Visionaries and Provocateurs from the PSU College of the Arts. She will use the prize money to undertake an ambitious drawing project in collaboration with the Center for Life in Extreme Environments at PSU.

Hanley will join scientists in the field, conducting research on organisms that live in extreme environments and creating a body of artwork that urges community engagement with art, philosophy, and science.

Working with PSU Biology professor Annie Lindgren, Hanley will travel to hot springs and deserts to collect samples of three different forms of extremophiles. She’ll study bacteria that live in hot springs, mosses that live beside hydrothermal pools, and fish that live in temporary pools in the desert, hatching from dried eggs in the dirt after a rainstorm.

Based on this research, Hanley plans to create a series of charcoal drawings, making visible the unseen ecosystems in which these organisms thrive.

“Art has the ability to bridge the gap between hard science and human experience," she says. "I am interested in how I can use scale and the medium of drawing to relate an invisible biological community to the viewer’s own body to alter one’s sense of space.”

Hanley is the second recipient of the Andries Deinum Prize for Visionaries and Provocateurs, the largest cash award in the PSU College of the Arts. The prize is given to a student who is committed to expanding public dialogue via creative artistic expression, original research or an innovative project highlighting the role and value of art in the 21st Century.

The prize is named for the late film educator and PSU professor Andries Deinum (1918-1995), who transformed Portland’s cultural and intellectual landscape through his innovative use of film in education. The prize was established with gifts from devoted former students, colleagues and others inspired by Deinum’s humanist values.

The selection committee was impressed by Hanley’s artistic engagement with broad social and scientific issues including climate change and scientific literacy. “Megan’s project emphasizes human connection to the natural world through exquisite artistic detail,” says Sue Taylor, the interim dean of the College of the Arts.

“Andries Deinum believed in art with a purpose, using his filmmaking to ignite community conversations around the important issues of his day,” Taylor says. “By bridging scientific and artistic forms to explore the impact of humans on the environment, Hanley is continuing Deinum’s legacy in Portland.”

Hanley has prior experience creating art based on scientific research: for her graduate thesis project, she participated in an archeological excavation of an ancient Roman necropolis in Spain, funded by the Mary Ausplund Tooze Scholar Travel Award. After three weeks of meticulous excavation in the hot sun, Hanely created a series of life-size charcoal drawings of the graves, with detailed renderings of plants that had grown over the disturbed earth emphasizing the connection between decay and regrowth.

Lindgren, the Biology professor, says that Hanley “has an ability to interpret the connections between humans and the natural world that is very distinct from how scientists perceive these same connections; her ability to appreciate and question our science pushes us to think about novel approaches to our research.”

Film educator Andries Deinum transformed Portland’s cultural and intellectual landscape through his innovative use of film in education. A pioneer in film studies, Deinum brought the discipline to Portland State, cofounding the Center for the Moving Image in 1969.

Deinum’s unique approach to teaching placed film at the heart of a liberal arts education. Following the tradition of Vincent Van Gogh, whom he greatly admired, Deinum believed that “art is nothing at all unless it is equipment for living…unless it untangles our surrounding chaos for us, rather than adding to it.” Hence his oft-cited dictum: “Art should stir people up, not mix them up.”

As an individual who had seen the oppressive force of Nazi Germany in his native Friesland and confronted the Hollywood blacklist after he immigrated to the United States, Deinum placed high value on the role of the personal voice in art and public life. Outspoken and often controversial, he used both film and public television to foster conversations around issues such as urban planning, minority rights and censorship.

Active in both civic affairs and teaching, Deinum helped to guide PSU’s development as an urban university, spurring it to live up to its motto, “Let Knowledge Serve the City.”