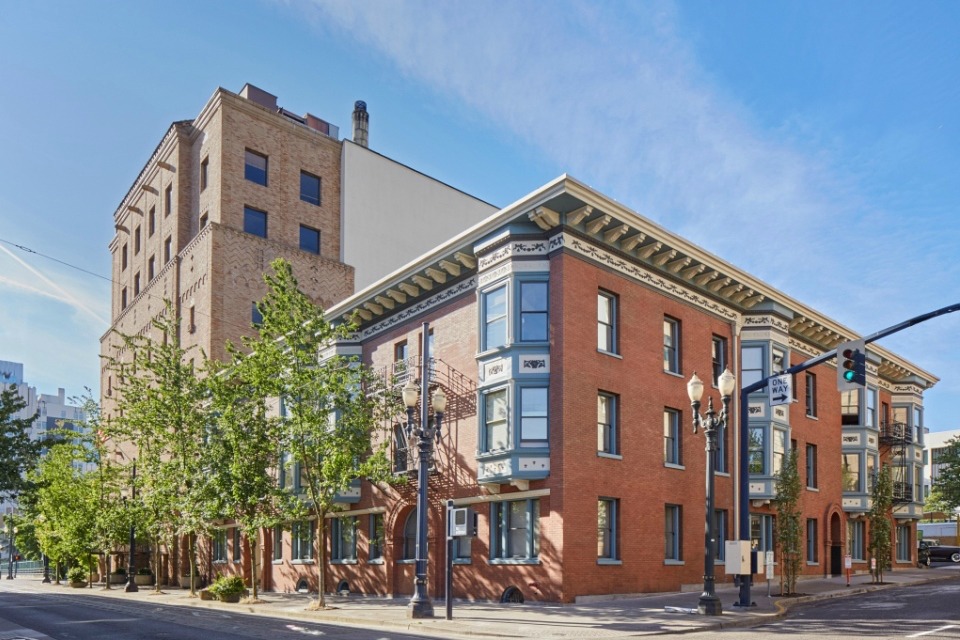 The Housing Credit is America’s and Oregon’s primary tool for creating and preserving affordable housing, financing nearly all affordable rental homes since it was signed into law by President Ronald Reagan.

Built in 1905, the Bronaugh is listed on the National Historic Registry. In 2013, REACH purchased the Bronaugh to preserve the affordability of its 50 apartments for residents, several of whom have lived in the building for over 20 years. The preservation required multiple funding sources and partners, including HUD, the State of Oregon, Portland Housing Bureau, Network for Oregon Affordable Housing (NOAH), and Bank of America Merrill Lynch.

“The Bronaugh Apartments are a prime example of how the low-income housing credit helps preserve affordable homes to Americans who need it the most," said U.S. Senator Ron Wyden. “REACH did an outstanding job of leveraging the housing credit to attract public and private investments critical to ensuring that more Oregon families, seniors and veterans would have a roof over their head and be safe. Congratulations to all of the partners involved on this well-deserved national recognition.”

“Each year, the Edson Awards recognize and celebrate the Housing Credit’s unique ability to improve lives, strengthen our communities and boost the economy. This year’s winners remind us how vital the program is for Oregon and America,” said Anthony J. Alfieri, president of the Affordable Housing Tax Credit Coalition. “The Housing Credit is America’s primary source of funding for affordable housing, and as such must be expanded to ensure that more developments like the Bronaugh Apartments are possible.”

The Bronaugh was one of 11 buildings identified by the City of Portland as at risk of conversion from affordable to market-rate rents due to the imminent expiration of their Section 8 contracts, which would have potentially displaced hundreds of vulnerable residents. Dubbed the “11x13” preservation campaign, the city sought to preserve the affordability of 11 expiring Project‐Based Section 8 projects by 2013. The coalition worked for five years and succeeded in preserving the 11 buildings, guaranteeing 60 years of affordability for 700 apartments; the Bronaugh was the last building to be preserved as part of the campaign.

“The renovation of the Bronaugh Apartments is a shining example of the importance of affordable housing preservation,” said Margaret Salazar, Director of Oregon Housing and Community Services. “At a time when stable and affordable housing is scarce, protecting the existing housing stock is just as critical as developing new affordable opportunities. We commend REACH for their work to ensure that Oregonians continue to have access to safe and stable housing at The Bronaugh.”

“Our commitment to creating and preserving affordable homes for Portland residents is brought to life by the Bronaugh, and we’re honored that it was recognized with an Edson as one of the most outstanding Housing Credit developments in the country,” said Dan Valliere, Chief Executive Director, REACH.

A panel of four judges selected eight first place winners and eight honorable mentions for this year’s awards program. Given annually by the Affordable Housing Tax Credit Coalition, The Edson Awards are named for Charles L. Edson, an affordable housing luminary who was Transition Director for the U.S. Department of Housing and Urban Development (HUD) on President Carter's Transition Staff. Mr. Edson served in the Office of the General Counsel at HUD and served as Co-Editor-in-Chief of Housing and Development Reporter for nearly 40 years. He is a founding partner of the law firm Lane and Edson, and was later a partner of Nixon Peabody LLP.

The Low Income Housing Tax Credit (Housing Credit) was created as part of the Tax Reform Act of 1986.  Today, the Housing Credit is widely regarded as the nation’s most successful housing production program ever. The Housing Credit has financed nearly 3 million affordable apartments, supporting 96,000 jobs each year, mostly in the small-business sector.