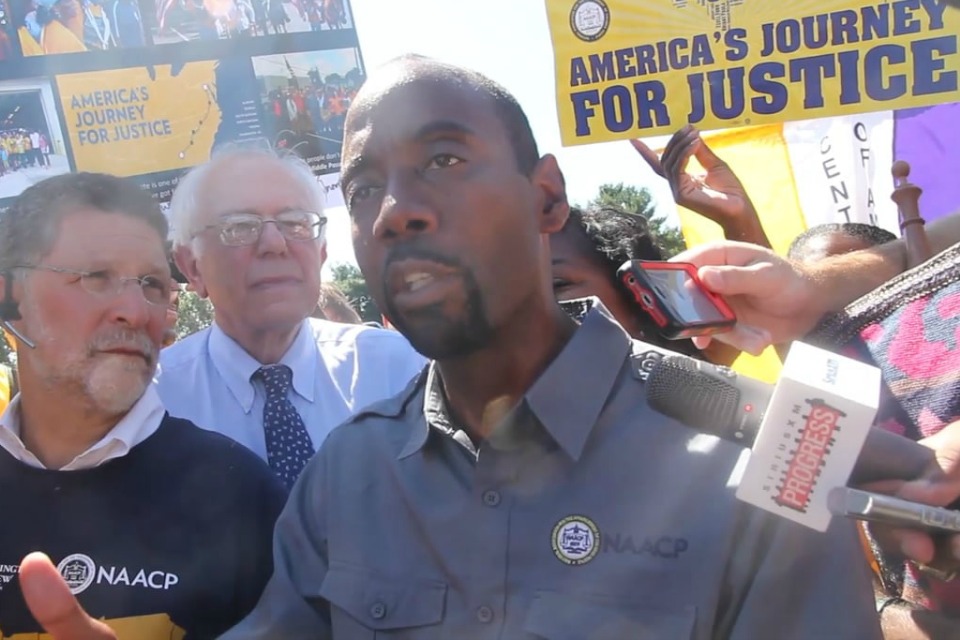 The NAACP Board of Directors announced a resolution calling for an international economic boycott of the state of North Carolina in response to actions of an all-white legislative caucus, which unconstitutionally designed racially-discriminatory gerrymandered districts, enacted a monster voter suppression law, passed Senate Bill 4 stripping the incoming Governor of power and passed House Bill 2. HB 2 is anti-transgender, anti-worker and anti-access to the state court for employment discrimination.

“The federal court has declared and North Carolina citizens have discovered that partisan legislators are discriminating in the voting booth, school bathrooms, the workplace and across the state.  Seldom has such a poisonously partisan few violated the rights of a nonpartisan many: workers rights, LGTQ rights, civil rights, and voting rights. Therefore, the NAACP must use the power of the purse to demonstrate the power of our democracy.  We will use economic leverage, moral persuasion, civil disobedience and litigation in North Carolina and across the nation--as needed and now. Unrelenting resistance is the order of the day,” said NAACP CEO and President Cornell William Brooks.

Rev. Dr. William J. Barber II, stated, “The actions of the all white caucus of extremists in our legislature and the former Governor are out of control. They have consistently passed legislation that is a violation of our deepest moral values, voting rights, civil rights and the fundamental principle of equal protection under the law.”

“The federal court ruled against their voter suppression and racially gerrymandered districts. We believe their attacks on the transgender community and attempt to strip the Governor of power will also be found unconstitutional. Their decision to block local municipality’s ability to raise wages and their limitation of access to state courts are wrong and we must stand strong against any and all attempts to deprive citizens their rights ordained by God and guaranteed by the constitution,” said Rev. Dr. Barber, NAACP North Carolina State President. “What has happened in North Carolina makes this state a battleground over the soul of America and whether our nation is sincere about making democracy real for all people, not just those with the right bank account, right sexuality or right skin.”

According to the NAACP Board of Director’s Resolution:

The National Board of the NAACP will explore such a North Carolina Boycott along with the NC State Conference until the NC legislature passes bills that accomplish the following (or until such results are achieved through the courts):

b) Repeal the entire HB-2 law;

d) Repeal the requirement that litigants to appeal to the en banc Court of Appeals before they can file an appeal to the NC Supreme Court;

e) Repeal legislation that stripped the current Governor of powers his predecessor enjoyed.

Be it further resolved that the National NAACP and the North Carolina NAACP will engage in a joint media and public education campaign regarding this decision.

And be it finally resolved that in light of the adoption by other states of similar laws that reflect racial gerrymandering, discriminatory voter suppression laws and similar types of laws to redistribute political power to the detriment of racial and ethnic minorities or change the nature of the electorate, the National NAACP will engage in applying various forms of economic sanctions or other appropriate economic or direct action to address these types of discriminatory legislative or executive actions around the nation.”

Two weeks ago in a march that drew close to 100,000 individuals to the state capital to protest against extremism in the NC General Assembly, Rev. Barber informed the gathering that the NC State Conference Executive Committee had voted unanimously to ask the National Board of the NAACP to grant permission for economic boycott, which the NAACP National Board of Directors recently approved in a resolution last weekend during their annual board meeting in New York.

Along with the NAACP, at least 200 additional organizations are planning to join them in the economic boycott of the state.  The press conference will kick off the economic boycott, which will include several stages and escalation of protest. The NAACP will refuse to hold its convention in North Carolina and will reach out to other organizations to take similar stances.

Additionally, the NAACP will create an internal task force to examine the ways in which the economic boycott can be expanded throughout the state as well as replicated in other states that have enacted similar racist voter suppression laws and laws like HB-2 which discriminates against the LGBT community, transgender people, workers, municipalities wanting to increase their minimum wage, and those in need of state access to courts for employment discrimination.

To see the complete resolution visit the NAACP here.