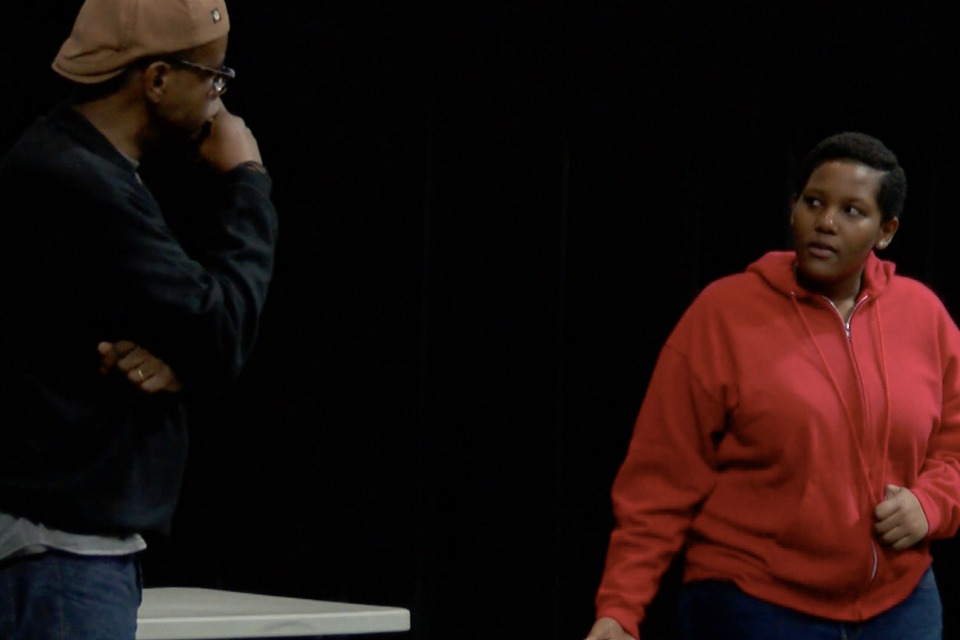 What does it mean to present an evening of theatre and music that is unapologetically ethnic? According to the August Wilson Red Door Project, you start with talented and determined Portland area high school students performing the work of master playwright, August Wilson, move to the contemporary resonance of the powerful monologues of Hands Up, and weave throughout the music that has helped forge a culture – from its African beginnings to blues to jazz to hip hop.

The formal occasion for the show is the August Wilson Monologue Competition, a national contest that the Red Door brought to Portland in 2013. The AWMC is a showcase for high school age students who have the grit and spirit to embark on a challenging journey. Professional actors and directors train students to master Wilson’s complex characters, lyrical language, and astute depiction of African American experience and culture. At the Newmark, students will vie for a chance to perform at the August Wilson Theatre on Broadway, competing against peers from ten other cities, including major theatre centers like New York, Boston, Chicago and Seattle. Local and national contest winners receive cash prizes, exposure, and opportunities to continue their studies. In 2014, the national winners in New York met Denzel Washington, director and star of August Wilson’s play, "Fences," which is now enjoying tremendous critical and audience acclaim as a ﬁlm.

“This is an important program for Portland especially,” said Kevin Jones, CEO and Artistic Director of the Red Door. “We have more millennials moving here than any other city in the country, and they're bringing a different paradigm. They don't think of race the same way older generations do. The fact that the AWMC celebrates a playwright of color and performers of all colors makes it not only about theatre—it’s directly connected to equity and our city’s future."

Hands Up The Red Door, whose mission is to change the racial ecology of Portland through the arts, is continually working on Portland’s future. In 2016, they presented Hands Up, a series of seven monologues about law enforcement and the African American community, written by black writers and performed by black actors. Close to 5,000 people saw Hands Up in the Portland area. By audience report, the show’s impact was stunning, and the post-show talk backs were transformative. The Red Door will kick off its 2017 tour by presenting two of the Hands Up monologues at this cultural celebration. The Music of an American Culture Very special musical guests include jazz composer, pianist and PSU Professor Darrell Grant performing “When I See the Water,” an original work written in homage to Nelson Mandela; American Roots musician Tony Furtado; Vocalist, Danielle Barker; and Portland DJ, David van Overeem.

African American music begins with the African banjo and polyrhythms and spans gospel, blues, rag, jazz in its many forms, R&B, soul, rap and hip hop. What a legacy to honor along with the work of August Wilson, twelve gifted high school students, and the contemporary playwrights and actors of Hands Up! The evening will be thought provoking and a feast for the senses – a true celebration! At a glance What: August Wilson Monologue Competition

Where: Newmark Theatre, 1111 SW Broadway, Portland 97205 Details: The event is FREE, but reservations are required.