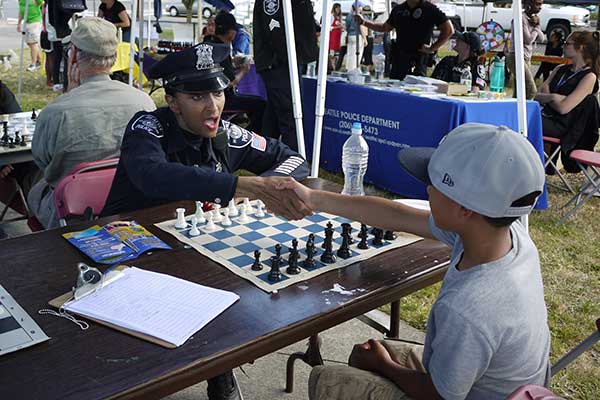 Chat with City Light representatives about how local renewable energy projects in the Pacific Northwest can support clean energy and a healthy environment. The Green Up program uses renewable energy projects to help promote economic development in rural parts of the region, improve Washington state's energy security and reduce pollution.
Seattle City Light customers can change their owned or rented home's energy usage to renewable energy through the Green Up program. Customers can choose to purchase renewable power for 25%, 50% or 100% of their power usage.

As the first responder for a large range of situations, the King County Sheriff’s Office rescues a number of county citizens, including some four-legged residents stranded in rising waters. Thanks to legislation introduced by Metropolitan King County Council Vice Chair Reagan Dunn, the generosity of King County resident Barbara Kajiya, and the unanimous approval of the County Council, the King County Sheriff’s Office is now the owner of a 2006 Achilles inflatable boat and compatible trailer ready to be used for marine rescues.

For a number of years, King County resident Barbara Kajiya has been seeking to donate the 2006 Achilles Inflatable Boat to an organization that could use the craft for animal rescues. After Kajiya connected with the King County Sheriff's Office Marine Unit, that has personnel trained in technical animal rescue, Councilmember Dunn worked with King County Sheriff John Urquhart to write legislation accepting the donation.

A few years ago during a large flood event in around the Skykomish River, quickly rising waters left an elderly woman with medical issues and her pet dog stranded. The woman needed assurance that her pet dog could be transported safely before she agreed to evacuate. Thanks to the equipment and training of the King County Sheriff’s Office Marine Rescue Dive Unit, both the woman and her dog were able to be safely rescued.

Animal rescues can range from saving domestic dogs and cats to agricultural horses, cows, swine, and fowl. Rescuers have specialized knowledge for handling animals stranded in water, including animal behavior during rescue, basic for aid for animals, and how to extricate, and safely transport, animals. Not all animals can be directly transported in the donated boat, but it can work to transport tools rescuers need to lead larger animals out of harm’s way.

The donated boat can also be used for human rescue, diver support, and as a platform for the King County Search and Rescue team. Search dogs and handlers can use the boat’s stable floor while the dogs have their heads on the soft inflatable side sniffing for missing persons in the water, reducing injuries and fatigue to the search dogs and making marine rescues more effective.

The Metropolitan King County Council adopted legislation to allow retail marijuana stores in geographic areas where none exist currently; to require separation between retailers in areas where multiple shops already exist and to limit growing, production and processing facilities in the rural areas to zones with lots of 10 acres or larger. Production and processing facilities continue to be allowed in previously-permitted zones such as agricultural and industrial areas. The action also called for a broader study of marijuana land uses in unincorporated King County, including further potential expansion of retail in neighborhood business zones.

In addition to expanding retail opportunities, the ordinance addresses challenges with production and processing facilities locating in primarily residential areas, removing a source of conflict between potentially incompatible uses.

A study by the University of Washington recently found that the amount of marijuana allowed to be grown by state-licensed producers in Washington is enough to satisfy both the medical and recreational marijuana markets. At the same time, the recent closure of medical dispensaries has affected patients’ ability to continue to obtain a supply of medical marijuana products. The Council’s vote today balances expanding access to retail marijuana with protection of existing neighborhoods who are bearing the impact of this new and growing market, while continuing to allow production and processing in large parts of King County, covering tens of thousands of acres in multiple land use zones.

Councilmember Balducci praised the process by which the compromise legislation was enacted after a 5-3 vote: “This was truly a team effort. Multiple councilmembers added amendments and language that improved the final product, including establishing the County’s intent to continue to expand retail access, and to study the growth of the industry in the coming months and years to confirm that the County’s land use allowances provide sufficient ability to site retailers, producer and processers.”

For more Seattle and Portland events, see the Community Calendar.