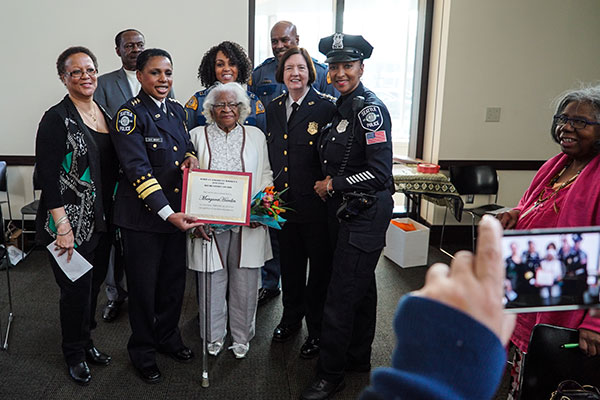 EMP Museum and Brandkings present the third annual Through the Eyes of Art, Seattle’s premier Black History Month celebration on February 26, 2016. Celebrating the accomplishments of local artists, the event will feature a new album release performance by Seattle hip-hop artist, Draze; a live performance by Kimberley Nichole from The Voice; a visual arts showcase, awards presentation, and much more.

The Seattle Association of Black Journalists has a scholarship to help African American students in the Puget Sound region who are pursuing college careers in journalism.

The scholarship was established to honor Patricia Fisher: a Puget Sound native, journalist, educator and role model for her support of young people and her contributions to the community.

Awards are based on scholastic achievement, financial need, community service and a serious interest in print, photo, broadcast journalism or multimedia/ online, and non- fiction writing. Scholarships range from $500 to $2,500.

The deadline is March 1.

To get more information go to the website washboard.org

If you have any questions, e-mail Jamon@aol.com.

Chinatown/International District park to be renamed after Donnie Chin

Longtime director of the International District Emergency Center, Donnie Chin was tragically killed in an early morning shooting on July 23, 2015.
The Mayor will send to the Seattle City Council a resolution seeking support to rename the park.

Located at 700 South Lane Street, International Children’s Park was originally built in 1981 and was substantially renovated and improved in 2012. Mr. Chin was instrumental in the creation of the park. When the Chinatown/International District community began to identify needed programs and neighborhood improvements in the mid-1970s, Mr. Chin brought up the need for a children’s park and he continued to champion the idea until the park was built.

Seattle Parks and Recreation Superintendent Jesús Aguirre will begin the process to rename the park, which includes consultation with the Board of Park Commissioners. The existing Parks policy that requires a person to be deceased for a minimum of three years before a park may be named in their honor will be suspended in this case.

This spring Mayor Ed Murray will host an Education Summit to guide the City in its work supporting Seattle’s students, families and schools. The Summit will be held on April 30.

Mayor Murray’s Education Summit seeks to build on that partnership to address the disparity in educational opportunity and outcomes that disproportionately impact students of color and those from lower-income families. Community voices and local leaders will share what’s working well in our schools, where more support is needed and what strategies the City should support to help all students succeed in Seattle’s schools.

The four co-chairs of the Summit are:

Murray is also assembling an advisory group of education and community advocates, educators, and business and philanthropic leaders to help guide development of the Summit. The group will develop recommendations about how the City can best align its resources and efforts around closing the achievement gap. Seattle Schools Superintendent Dr. Larry Nyland and Seattle School Board President Betty Patu will participate. Other members of the group will be named.

In the weeks leading up to the Summit, the City, Seattle schools and several community agencies will be co-hosting a series of community conversations to listen to Seattle’s families, students, and community. Locations and dates will be announced in the coming days. These conversations will be open to all, with interpretation and childcare available when appropriate.

In 1990, Mayor Norm Rice held an Education Summit that established a deeper partnership between the City, Seattle Public Schools and education advocates. City residents came together to propose a new support for students and educators, the Families & Education Levy.