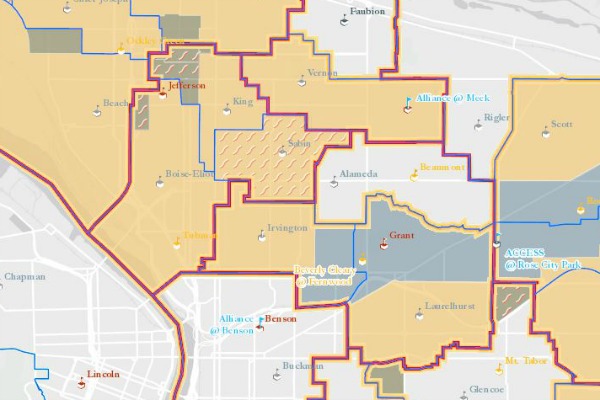 After attending a meeting on the new proposed boundary changes to Portland Public Schools, Nichole Watson thought the voices of Black parents, Black students and those from underperforming schools were missing from the conversation.

Watson in partnership with The Black Parent Initiative are holding a meeting at Maranatha Church, Dec. 1 to get input from Black parents about the proposed boundary changes. This gathering will be safe space, White allies are asked not to attend.

The meeting will provide a place for the Black community of Portland to discuss the implications of the boundary change scenarios. People will be able to meet in small groups. There will be comment forms that will be sent to PPS and computers set up to fill out online feedback forms.

“I wanted to provide a space for Black voices to not be intimidated by this obscure language and by these vague scenarios and be able to ask the right kind of questions,” she said.

At the center of the discussion are two scenarios proposed by PPS to deal with a predicted influx of students to the Portland area. It is estimated that there will be one million people living in Portland by 2040 and that PPS expect 5,000 more students in the next decade.

PPS faces the challenges of over-enrollment in some schools, under-enrollment in others and school facilities that are too small. The proposed scenarios remix K-8 schools into K-5 schools and middle schools.

PPS held twelve community meetings on the scenarios and will be gathering public comment until Dec. 5, according to Watson. She organized the meeting at Maranatha as an opportunity to push PPS for equity and to question the value of both scenarios.

“We don't have to accept either of these scenarios, we have the power as parents to say ‘no, go back, do it again. Go back and get it right, our kids are worth it. All of our children are worth it’,” Watson said.