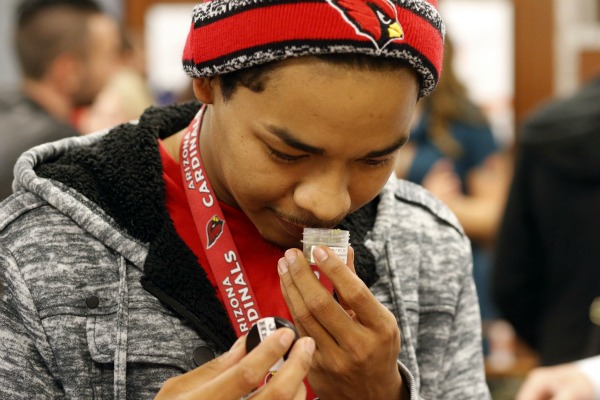 BEND, Ore. (AP) — The excitement about recreational marijuana continued through the weekend, with central Oregon dispensaries reporting thousands of customers.

Recreational marijuana became legal at midnight on Thursday and many stores reported long lines of customers.

Those lines continued the next three days, with customers flocking to dispensaries, according to The Bulletin newspaper in Bend. Bend has the most dispensaries in Central Oregon, with 16 locations.

"It was amazing," Ben Hebert, owner of Dr. Jolly's. "We were totally busy all the time. I think we had a lot of happy people coming out of here."

Oregrown Industries co-owner Aviv Hadar said sales reached $55,000 on the first day alone, with as many as 2,000 people stopping by the dispensary.

Bend Police Sgt. Tom Pine said recreational marijuana did not impact law enforcement officers and that he was not aware of any incidents related to the change. There was one report of a security guard at the Bend Fall Festival asking someone to refrain from smoking marijuana. That person complied.

Herbert said his dispensary stocked up on 30 marijuana strains for customers over the weekend, some of which sold quickly.

"We were prepared," said Hebert. "We knew what we were going to need. We were able to put out a lot of high-quality strains."

At Oregrown, Hadar said their success came from strong marketing before the laws changed. He said the company plans to donate some of the early sales to Umpqua Community College in the wake of the shooting that killed 10 people Thursday.

Information from: The Bulletin, http://www.bendbulletin.com