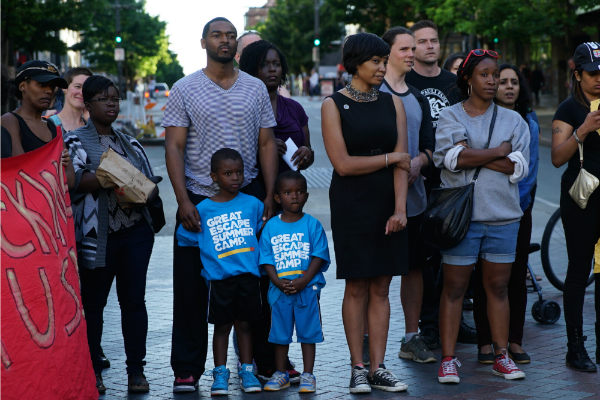 At 5 p.m this Friday, June 26, Trans Pride Seattle 2015 marches through the streets of Capitol Hill. The march starts at Seattle Central College and ends at Cal Anderson Park for a community celebration and resource fair. The 3rd annual Trans Pride Seattle, Gender Justice League builds on the momentum of Trans Pride 2014 and 2013, the second largest Trans Pride march and celebration in the country with more than 3,000 trans and allied participants in attendance.

Seattle Mayor Ed Murray and Dylan Orr, a former senior U.S. Labor Dept. official and first openly-Trans individual appointed in a presidential administration who was recently chosen as the new Director of Seattle’s Office of Labor Standards will present a proclamation for Trans Pride and announce a policy proposal that will positively impact the LGBTQ community.

Trans Pride Seattle 2015 is a smoke-free, scent-free event and will include ASL interpretation and a reserved area for people with wheelchairs and other mobility assistance devices. For more information, visit genderjusticeleague.org.

County Metro Transit is looking ahead to make sure it can provide the right mix of services and connections to get people where they need to go as our communities grow. At the same time, Sound Transit will be engaging with residents as it develops a system plan for a proposed ballot measure.

That’s why the two agencies have teamed up for a series of joint open houses, which began June 16, to give King County residents a convenient one-stop opportunity to help shape both of these important long-range plans.

In addition to providing feedback during an upcoming open house, you can take our survey to help us better understand what service you value in your community.

Based on feedback received during these open-houses, Metro will develop a preferred concept available for public review this fall. The public will have yet another opportunity to review Metro’s proposed plan in early 2016 before being submitted to the King County Council for action in mid to late 2016.

Got Green? United Tribes of All Nations Foundation, Central District Arts Forum, and Race & Climate Justice will sponsor a free event (with suggested donations going to the local NAACP for climate justice work) from 3 to 6 p.m. July 5 at Utilizing art, stories, and dance, we will begin to dissect the many ways people of color can begin to heal from the trauma when facing environmental racism and continue to build resiliency.

The event is organized by Central District Forum for Arts & Ideas, Got Green?, Race and Climate Justice, United Indians of All Tribes Foundation. Sponsors include Whidbey Institute, NAACP, Bayan PNW

For more Seattle and Portland area news and events see our Community Calendar.