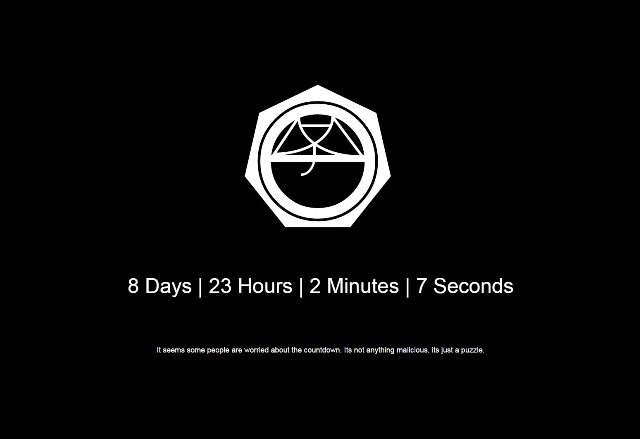 This is the website where the countdown clock points to March 11, 11:11 a.m. The message showed up at the bottom late Monday morning. Facebook image

A series of mysterious stickers found at Grant, Lincoln and Cleveland High Schools over the weekend have parents, students and staff spooked that a violent event might be on the way.

However now it looks as if perhaps there is no threat – but it’s still not clear.

A flurry of Facebook posts on the Grant parents’ Facebook page, as well as a Facebook page called “Strange Symbol around PPS” that was started Sunday evening, are drawing attention to stickers containing a smart-phone-scannable QR code, which takes users to a website featuring a clock counting down to Wednesday, March 11 at 11 a.m.

However as of Monday morning at 11 a.m., the website of the alleged threat now includes a note at the bottom:

It seems some people are worried about the countdown. Its not anything malicious, its just a puzzle.

Christine Miles of Portland Public Schools said Monday morning that Portland Police were “diving” into the digital information gathered in the case that might lead to the hoaxter. She said that the schools are on alert, with extra measures in place to track people entering the buildings and more.

“Because they are strange in nature and nobody knows what it is, we’ve notified police and they are looking into it,” she said. “Whenever we have events like this, everyone is on heightened alert.”

The stickers include a difficult to define black and white image shaped like a seven-sided polygon – almost like a nut that a bolt would fit onto – with a white bridge-like drawing in a field of black in the upper half.

Parents say the page also links to passages from the poem, “The Charge of the Light Brigade,” written by Alfred, Lord Tennyson, in 1854 to commemorate a military foray gone bad during the Crimean War.

“My son saw the stickers but had no idea what they meant. Please keep us apprised,” one parent wrote on the Grant parents’ page.

“This sounds really scary. Please keep us all updated on conversations with the authorities and administration,” wrote another.

What we know so far:
1. There have been stickers posted all around various pps schools with an unknown logo and a QR code
2. That QR code leads to the website http://24.21.69.161/
3. On the main page of that website, there is a timer that is going to end on March 11th (a Wednesday), at 11:11 AM.
4. If you try to go to any page that does not exist on the website, it takes you to a fragment of the poem "The Charge of the Light Brigade"http://en.wikipedia.org/…/The_Charge_of_th...

Within an hour of the first post, an administrator of the page reports that “law enforcement is now involved.”

Over on the Grant parents’ Facebook page, a slew of Sunday evening posts by moms and dads drills down into what the community has been able to find out about the situation – and indicates adults and kids had already been trying to trace the identity of the anonymous cyber troll.

So far no updates have been reported.